The country of Costa Rica, known in Spanish as “rich coast,” is located close to the equator giving it a warm tropical climate all year round. Considered to be one of the more expensive countries in Central America, Costa Rica supposedly has a health care system that is ranked higher then the USA. Sandwiched between Nicaragua and Panama, Costa Rica is working to become the first carbon-neutral country in the world. This Central American country is a land without a military dedicating most of its economics in education and creating an army of teachers instead of an army of soldiers.

Travel the world for long enough and it becomes evident that golden sunsets look different in every place you go. 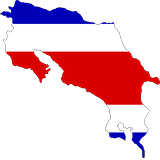