Wandering the Plains and Finding Bison in Manitoba’s National Park

Nestled in the midwestern part of the province of Manitoba, approximately 100 kilometers north of Brandon, Riding Mountain National Park is home to a staggering diversity of living things. This heartland of wilderness surrounded by farmland encompasses windswept grasslands, silent forests and rippling lakes all within its 3000 square kilometers of protected parkland.

Riding Mountain National Park is a beautiful park filled with an abundance of wildlife. Simply driving through the park can allow visitors the opportunity to spot a variety of species. From elk and moose to black bear and lynx – there are many furry creatures that call this part of Manitoba home. 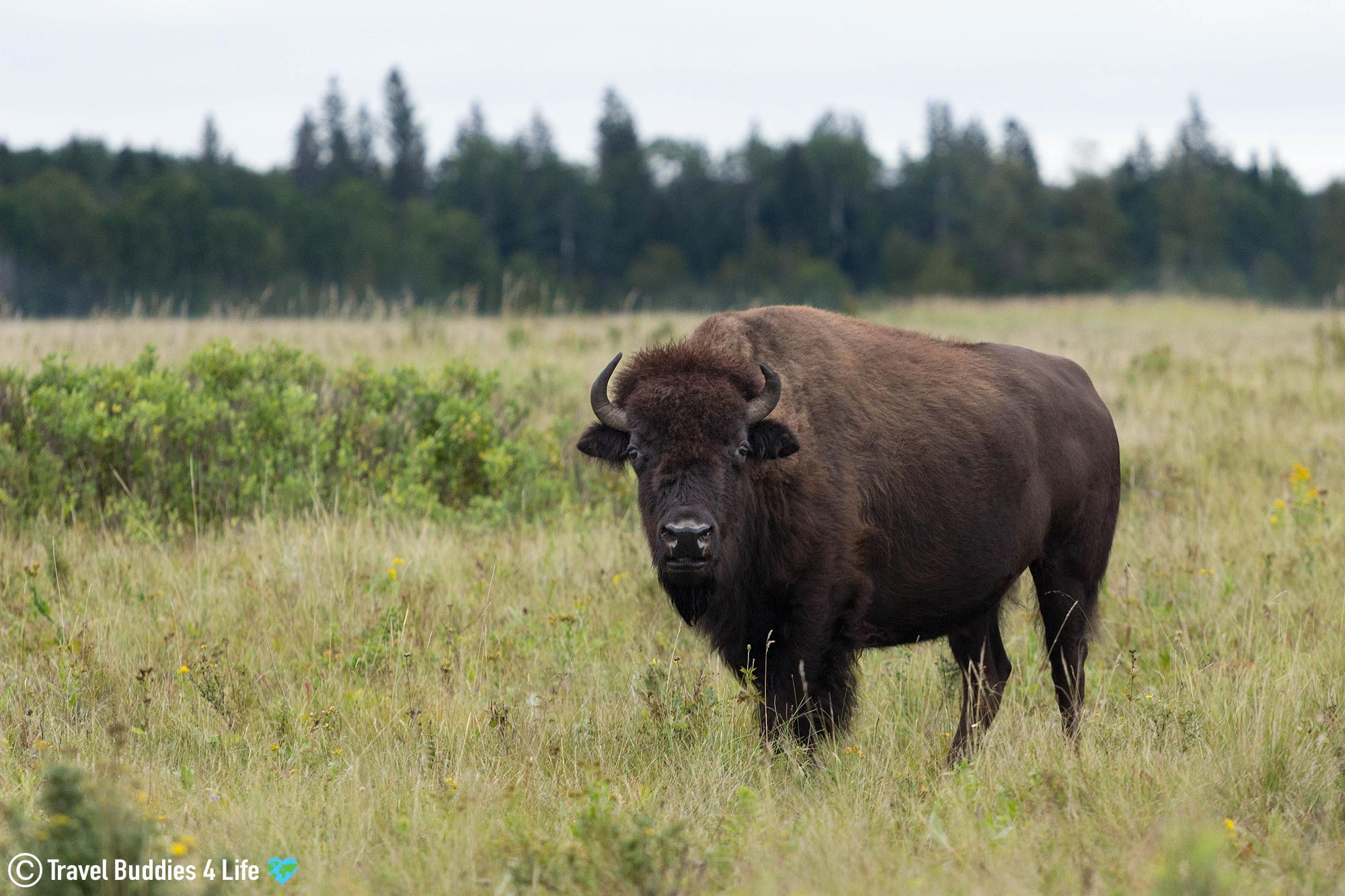 Hundreds of years ago, thousands of bison roamed the grasslands prairies of central Manitoba. Unfortunately, thanks to overexploitation, bison populations have become all but depleted.

This has dramatically reshaped the local ecosystems. Losing the plain bison proved not only a problem for wildlife in the area but also for the sustenance of grassland prairies. Just as bison require grasslands to thrive, the grasslands also need the grazing and pooping of this brown furry ungulate.

In an effort to save the rich and diverse grassland ecosystem, Riding Mountain National Park began implementing conservation practices in the early 1990s and reintroduced bison to the region.

The park created a special area called the Lake Audry Bison enclosure. This site was chosen because of its healthy prairies and because old bison bones and marking were found here – indicating that this was part of their historic range prior to extirpation. The enclosure is roughly 500 hectares which are divided into two sections – winter and summer pastures. 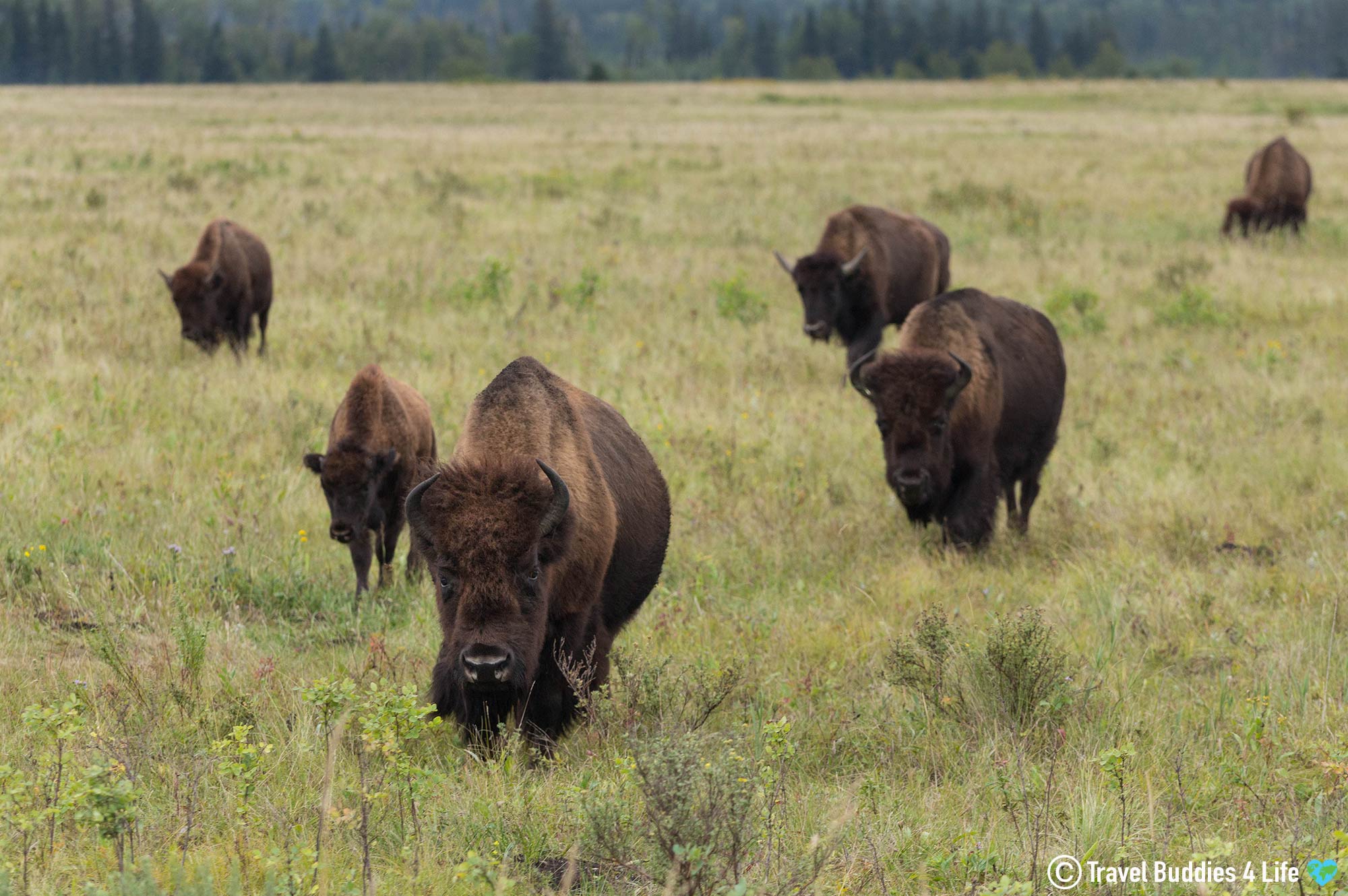 Initially, a group of 20 animals was brought in from Wainwright, Alberta and re-introduced to the area in 1931. Sadly this herd was infected with bovine Tuberculosis and had to be terminated. The second attempt at repopulating the grasslands with bison was with a herd brought from Elk Island National Park, Alberta in the 1940s.

Now a captive herd of approximately 40 plains bison roam free in the enclosure in search of food, water and shelter. These bison are descendants from the Elk Island group which have been cared for and maintained in a close to “wild” setting through a park management program. 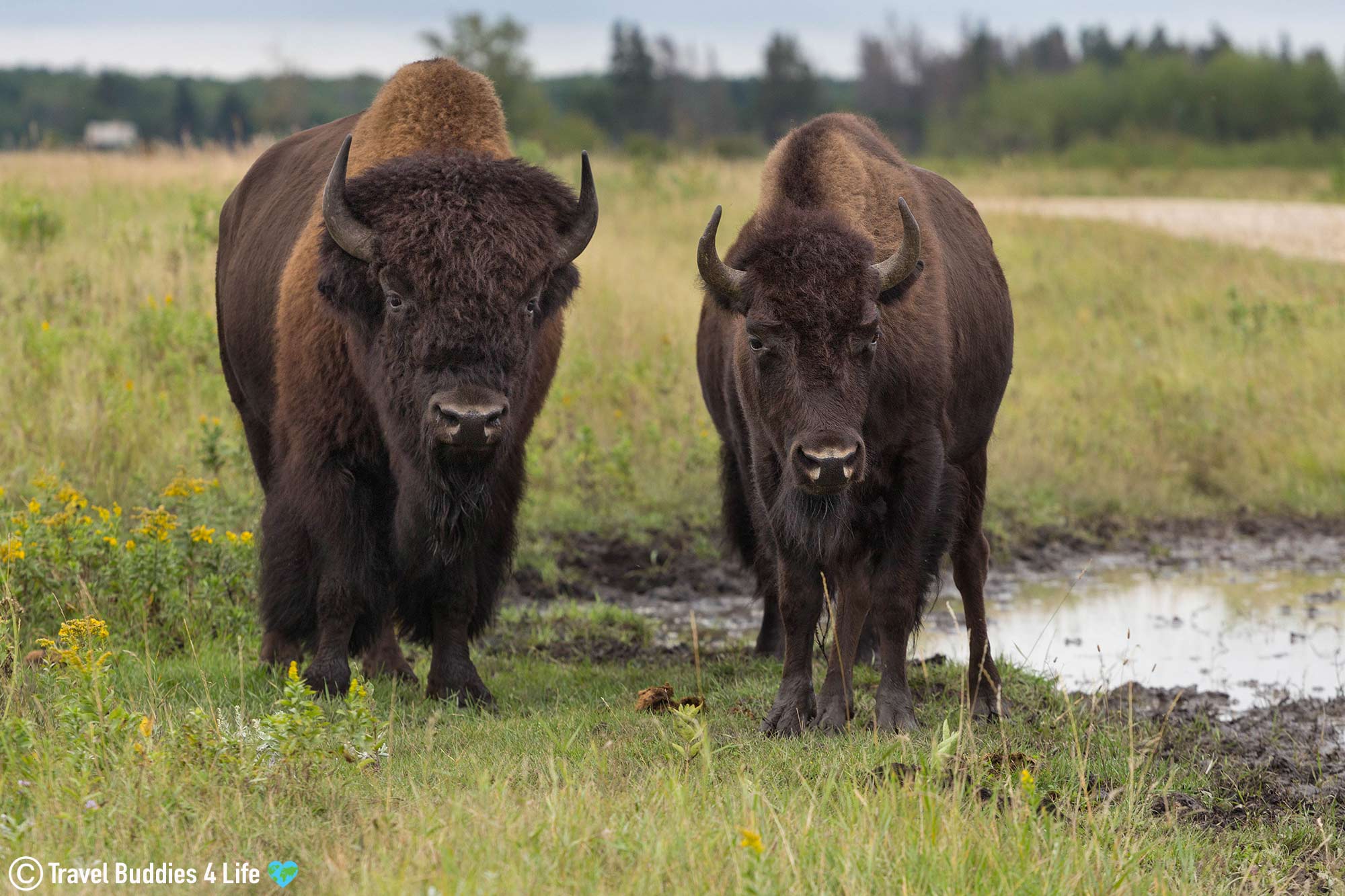 Driving Through the Bison Range

Arriving from our campsite at the Wasagaming Campground (around 40 minutes driving) we were pretty eager to drive through the enclosure and find some bison. Visitors are able to drive through the enclosure at any time during the day, however, it is recommended to visit during the morning and early evening hours as this is when the animals are the most active. We opted to visit in the wee hours of the morning.

The 500-hectare area of the Lake Audry bison enclosure was surrounded by a wire fence with cattle bars in the areas where the cars drive into. These gates keep the bison herd in the grasslands, while also allowing other wildlife, such as foxes, coyotes and deer to jump the fence or wander over the cattle bars and roam freely.

Our first stop was at the viewing platform which affords a spectacular panorama view of the surrounding grassy prairies as well as information on the bison and its history in the area. After absorbing all of the information we went back to our van and prepared our camera equipment for the dirt-road drive through the enclosure.

Important Information: Visitors require a personal car to tour through the bison enclosure and leaving the vehicle while in the enclosure is strictly prohibited unless you are on a guided tour with a ranger.

Driving through the arid grasslands, I was thoroughly impressed by the size of the bison enclosure. It was decently big! Fortunately, we were very lucky and the bison herd was grazing fairly close to the road allowing us a close-up look at some of the huge males and the adorably scruffy babies. We spent close to five hours parked by the herd watching and enjoying ourselves. Some of the bison stayed laying down in the sun, others enjoyed a good roll in the dirt. Some even got a little aggressive and knocked horns together in a wicked display of fortitude. 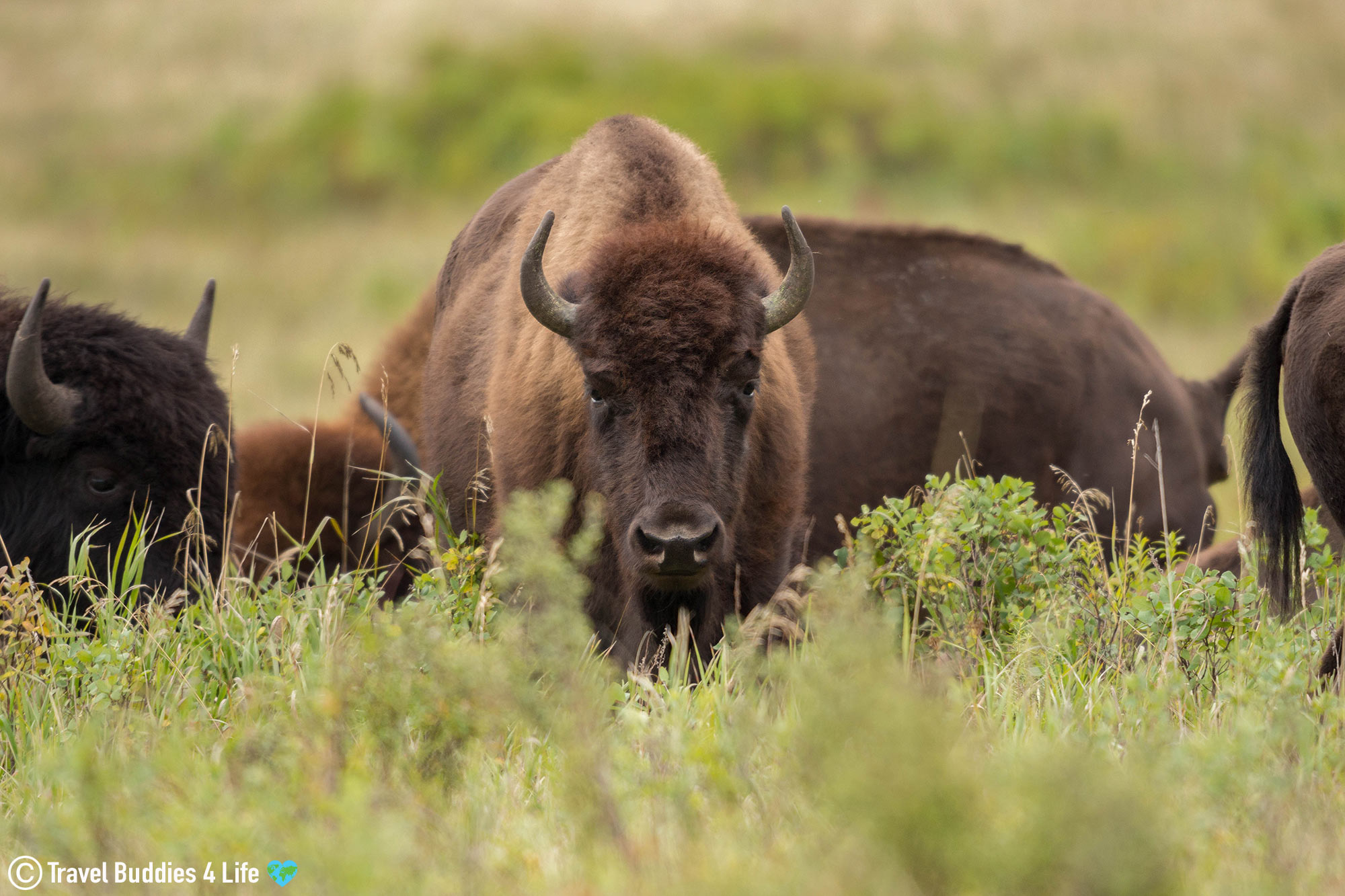 Find Yourself Some Bison in Manitoba

Seeing the bison of Riding Mountain National Park was a fun way to experience the Canadian province of Manitoba. Watching this mighty creature allowed me to imagine what the prairies might have once resembled when they thundered across the grassland. It was also a great reminder of what we have lost, and of what we must preserve. 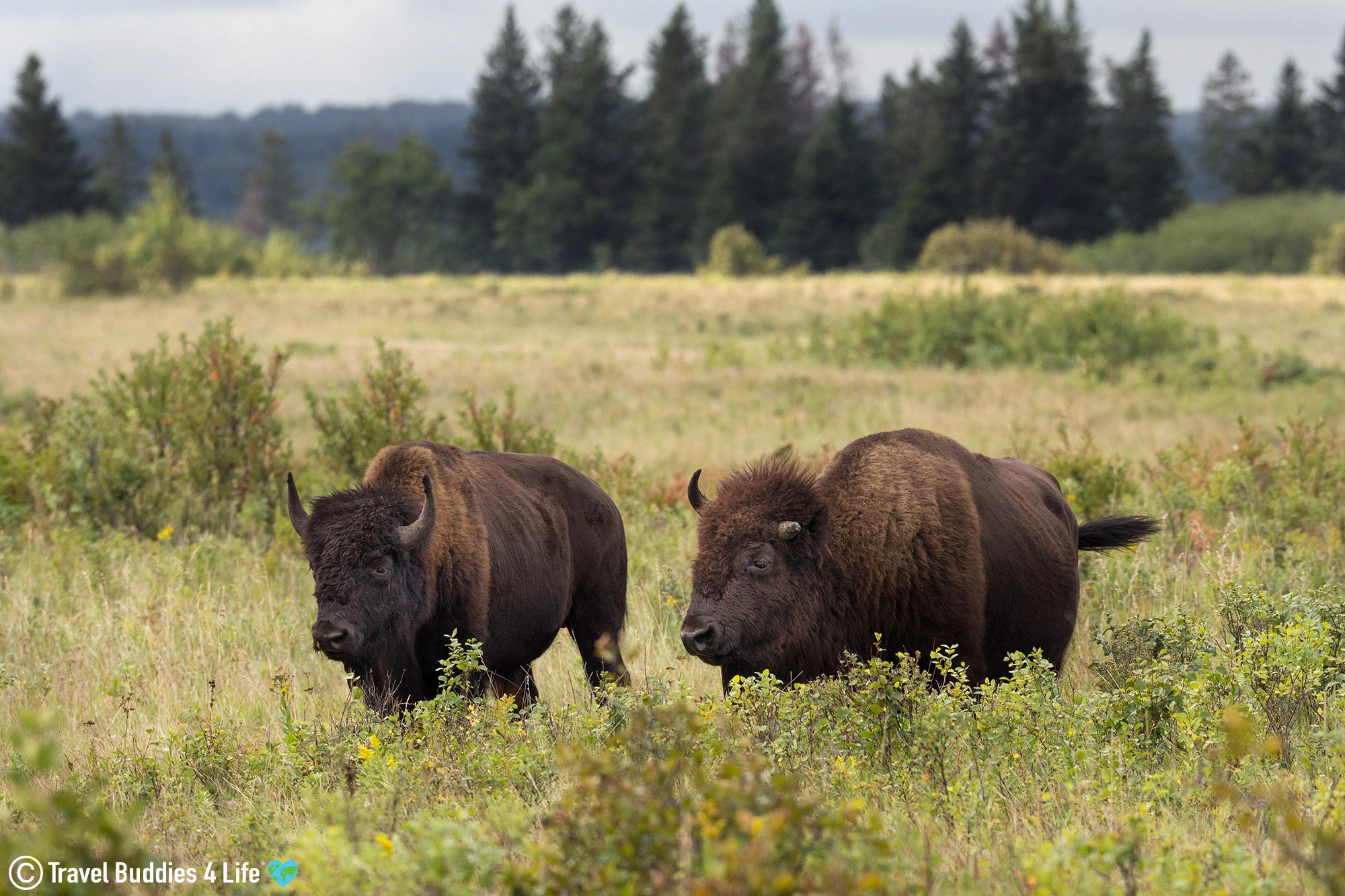 Have you ever seen a herd of bison in real life? Where did you find them? What did you think of their size and temperament? 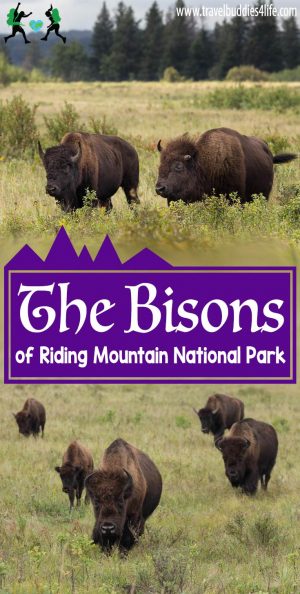