Belgium has three official languages; Dutch (more commonly known as Vlaams a spin-off of Dutch), French and German, arising from its neighboring countries; France, the Netherlands, Germany, and Luxembourg. Historically, Belgium was ruled as a monarchy and considered a relatively easy country to invade due to its unprotected borders. Since then, Belgium’s political aspirations have grown, and it is presently composed of both a monarchy and democracy. Together, these two parties form a complex governance system made up of six different governments.

While in Belgium, the city of Bruges is worth a trip both for the view and to sample local delicacies. 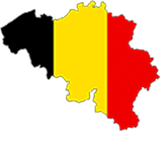