Canada is the second-largest country in the world with 10 provinces, 3 territories and a severely cold northern winter climate. This sparsely populated country has the longest coastline in the world measuring a distance of 243, 042 kilometers and touching the Atlantic, Pacific and Arctic oceans. Canada is a country with one of the highest ratings for quality of life, education and government transparency, making it both a land of opportunity and a great place to live.

Nestled in the midwestern part of Manitoba, Riding Mountain National Park is a great place to experience and view bison.

Travel the world for long enough and it becomes evident that golden sunsets look different in every place you go.

As part of a waterfront deal between Brockville and the Canadian Pacific Railway, the city's train tunnel is a colourful tourist attraction.

Canada: The Underwater World of Canada in Photographs

Canada is home to some of the most pristine and untouched underwater environments on the planet and with that in mind here is a sneak peek at underwater Canada in stunning photographs. 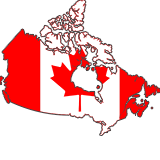