Canada: The Underwater World of Canada in Photographs

As seasoned divers coming from Canada, Joey and I are no strangers to cold water diving.

Our drysuits are well used, and we’ve spent many-a-dive in a brain freeze state of mind. I mean can you blame us when we live in a country that only has four months of summer? 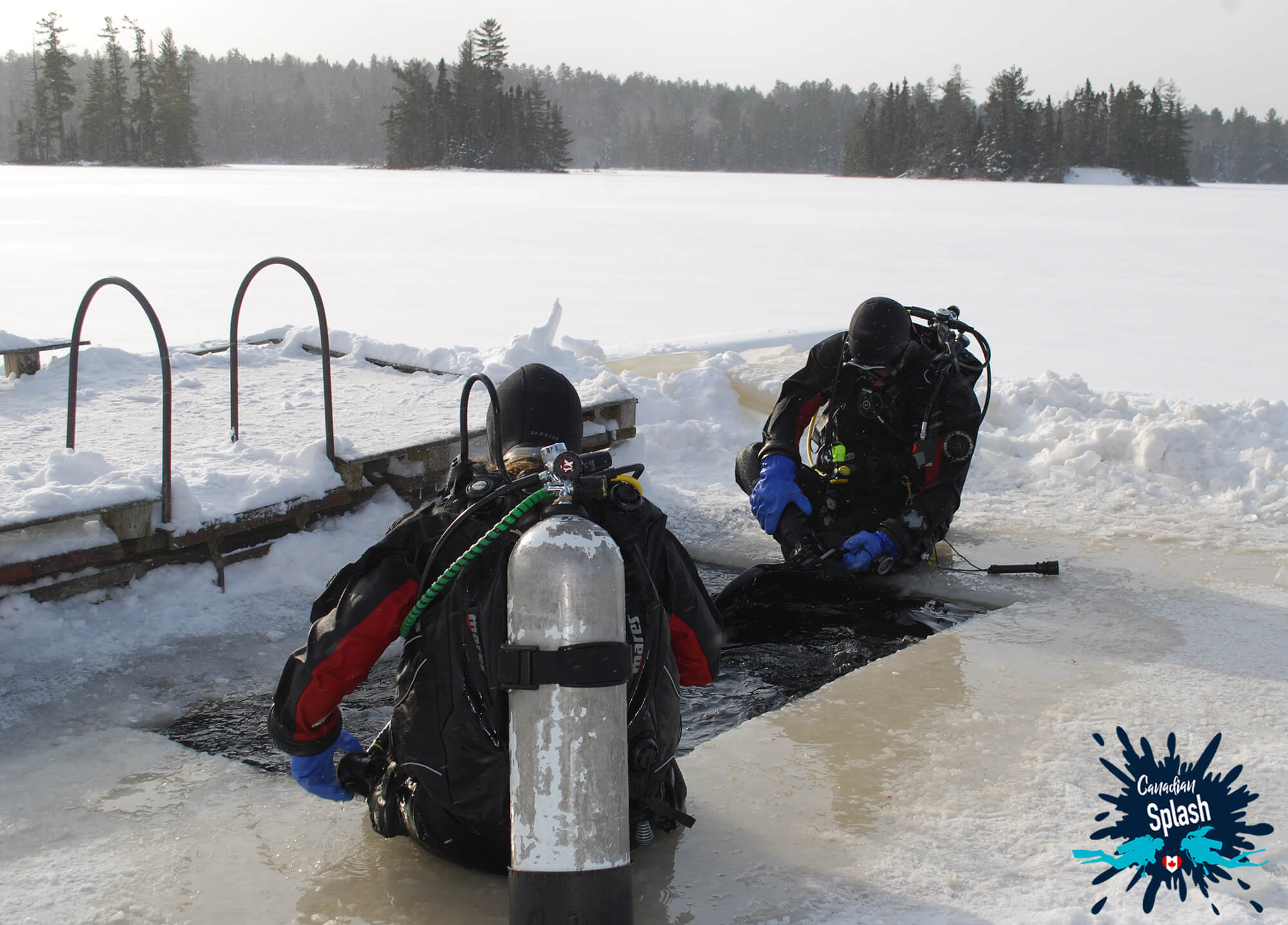 From east to west diving in Canada may not be a tropical dive destination, but with three oceans (the Atlantic, the Pacific, and the Arctic) and the largest group of freshwater lakes in the world, our country is home to some of the most pristine and untouched underwater environments on the planet.

Canadian Splash is a carefully crafted 13-part project where we will dive and photograph every province and territory of Canada showcasing the beauty, wonder, and fragility hidden beneath its surface. By exploring the watery world below the tideline we hope to show people that there is more to our northern country than hockey, vast wilderness, and maple syrup. 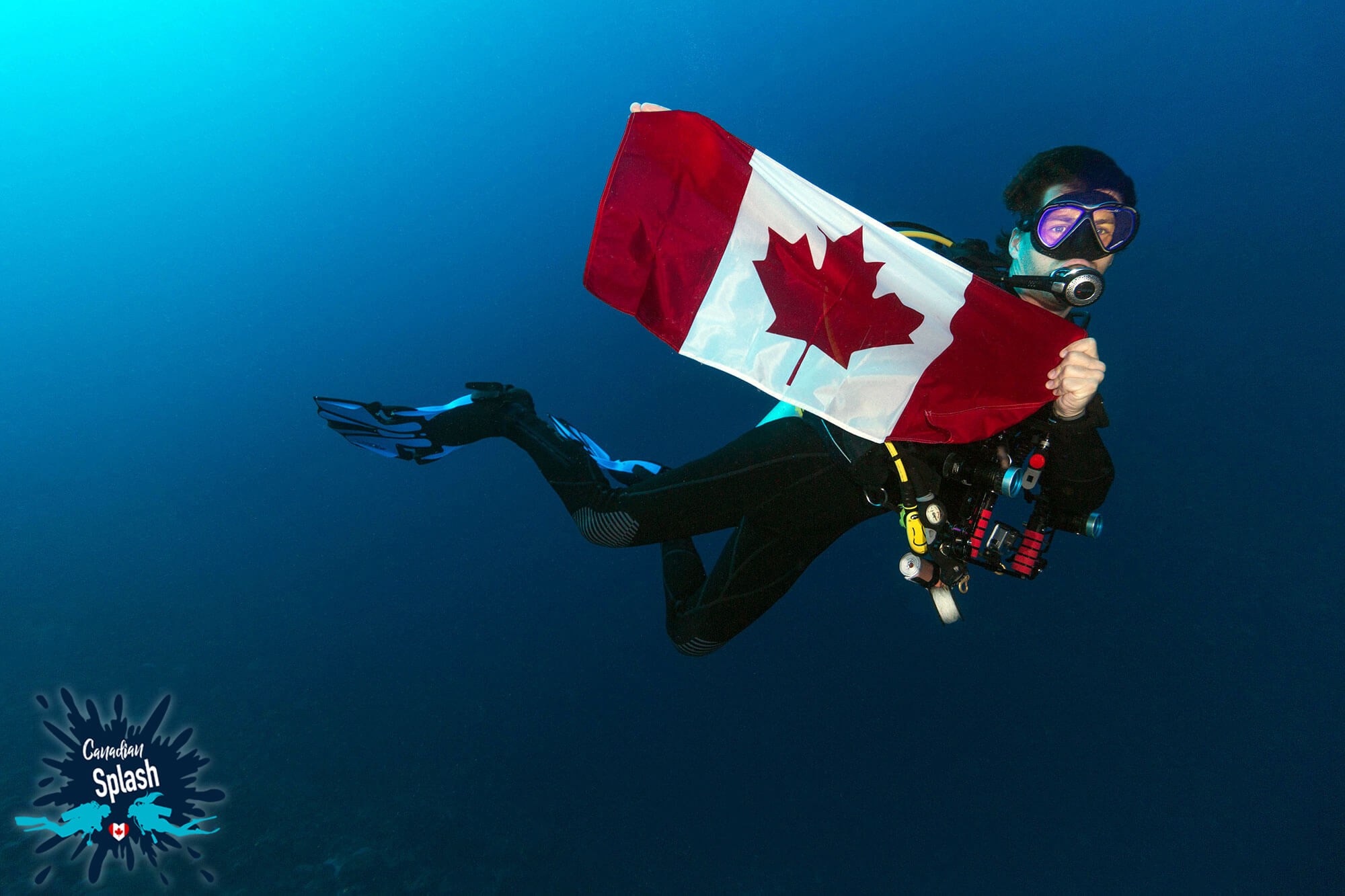 A Photographic Peek at Canadian Splash

Are you ready for a sneak peek at some of the beauty and awe that we have witnessed thus far on our Canadian Splash travels? 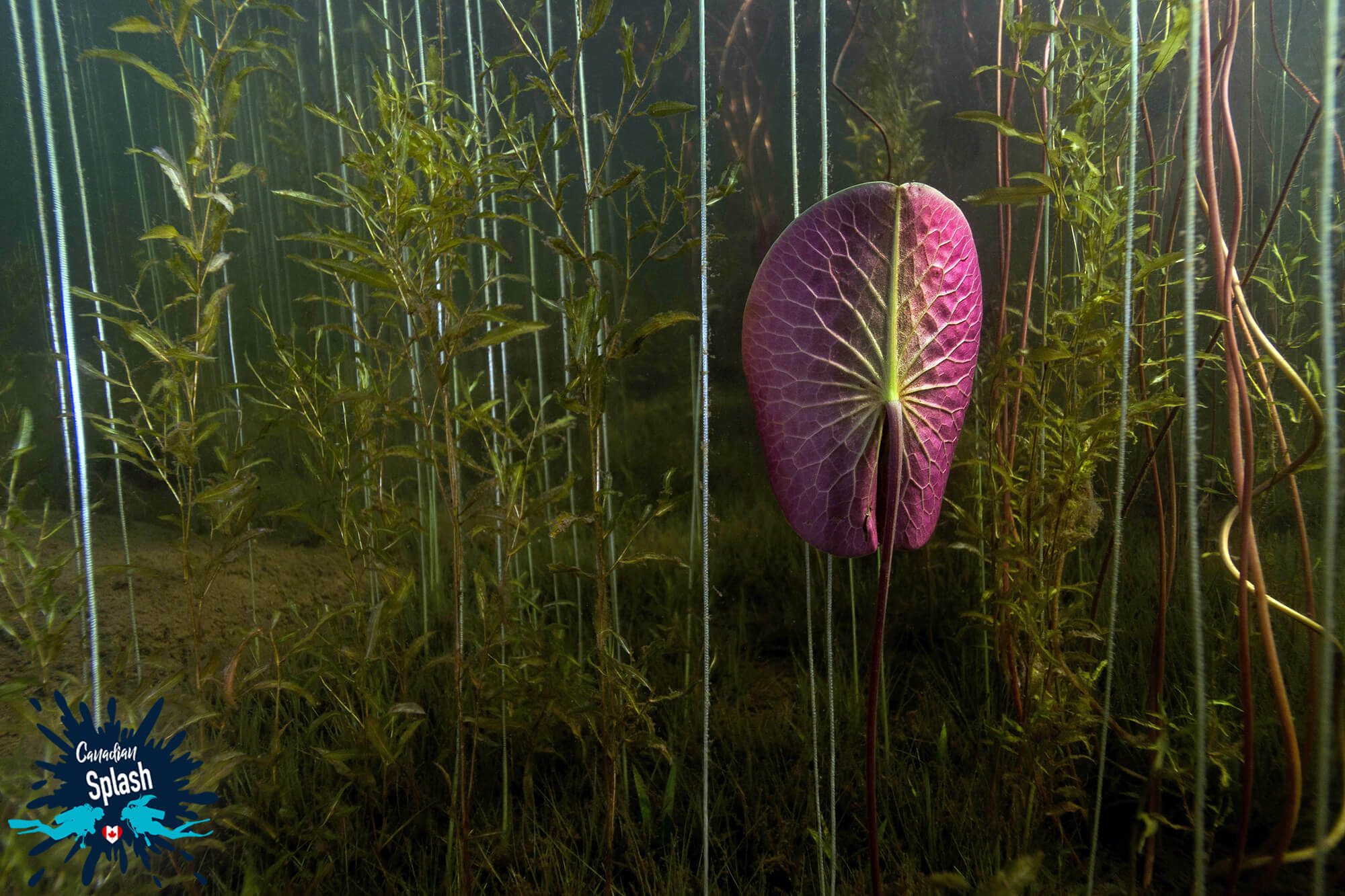 ⁣I am in love with Ontario’s wetlands, and feel that we should be giving more credit to these utterly amazing environments!

More than just plants and animals, wetlands are tremendously productive ecosystems that provide a myriad of services to society worldwide.

Wetlands bring balance to our natural environment. They are effective regulators of water, protecting land in both drought and flood situations. They also stabilize the soil, holding it in place and preventing erosion. Within that soil, they trap sediments, which helps create a rich, fertile habitat for plants and animals.

If the oceans are considered to be the lungs of the planet, wetlands are the kidneys. This is because the plants, bacteria, and animals in a wetland filter the water, capturing nutrients like phosphorus, which contributes to potentially harmful algae blooms in our lakes. Wetlands also act as carbon and greenhouse gas sinks, storing a portion of what would otherwise be released ⁣into the environment.

This underwater wetland jungle was photographed at Finlayson Point Provincial Park in Northern Ontario while on assignment with Ontario Parks. I love the green aquatic flora mixed with a splash of pink from the bottom of a lily pad. 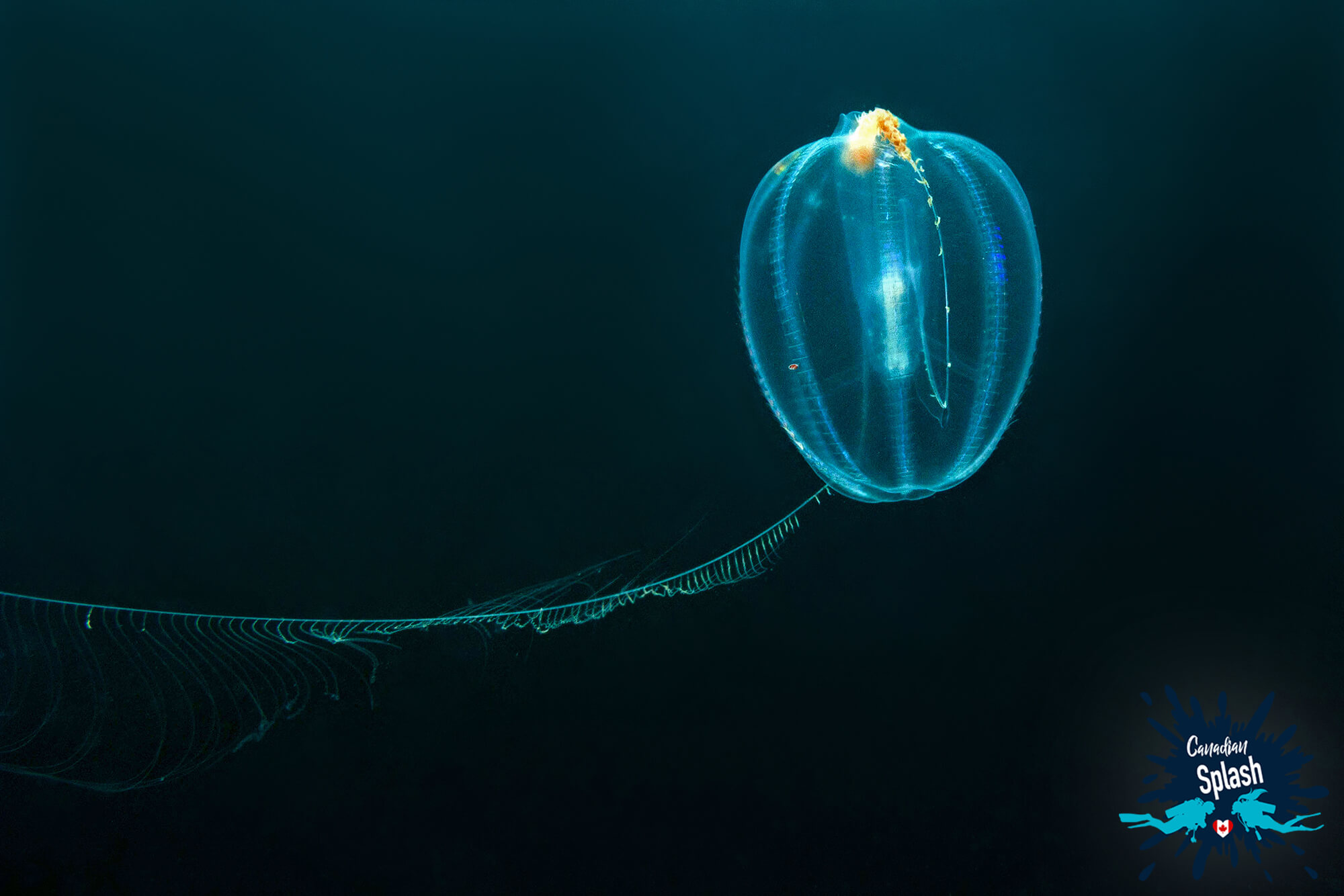 The sea is full of strange ⁣organisms and among those alien-looking creatures is the Sea Gooseberry (Pleurobrachia) a species of comb jelly found in the Canadian North Atlantic.

Comb jellies are beautiful, oval-shaped animals with eight rows of comblike plates used to move themselves through the water. As they swim, the cilia on the comb rows diffract light to produce a shimmering, rainbow effect.

In Nova Scotia, New Brunswick and Newfoundland comb jellies pepper the water, floating around like aliens suspended in space.

St Margarets Bay, just outside of Halifax, was where this particular comb jelly was photographed while scuba diving. I needed a focus light illuminating the translucent body from the top and two strobes on either side to capture its fragile beauty.

The Eye of a Scallop

Scallops are found all over the Canadian east coast. As seen in this photo, scallops have anywhere from 50 to 100 eyes that line their mantle. These eyes allow the scallop to detect light, dark and motion.

This simple yet intriguing photo focuses on the black beady eyes of a scallop surrounded by its white feeding cilia. This scallop was photographed while scuba diving on the muddy bottom of the Bay of Fundy in New Brunswick. 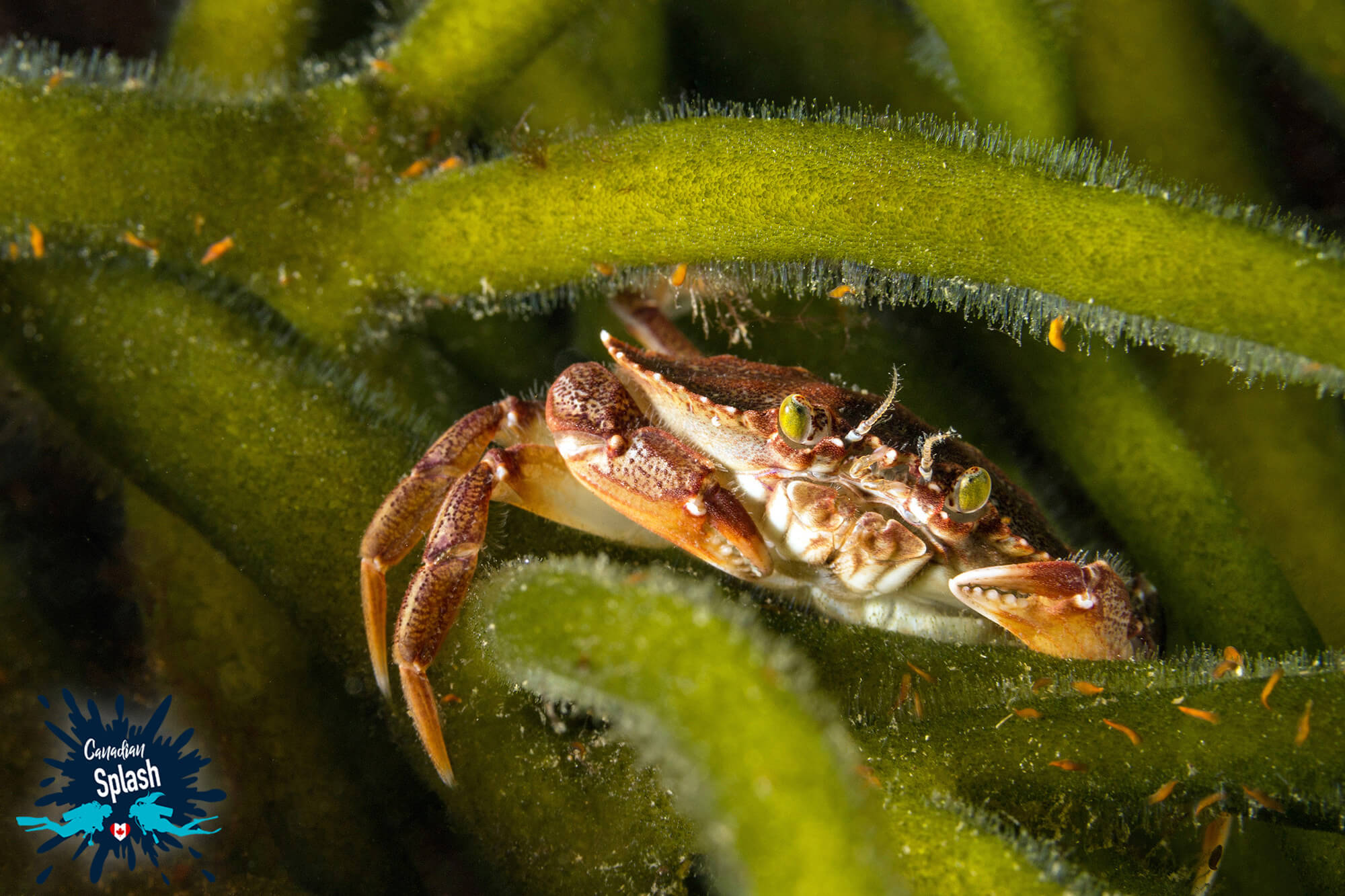 The North Atlantic ocean is a place of contrasts and color – you just need to know where to find it. Here we were lucky enough to glimpse a rock crab peeking out of the Codium fragile (also known as dead man’s fingers).

Shore diving around Halifax, Nova Scotia is a great way to find marine critters big and small. The rocky bottoms of some of these dive sites can be just littered with crustaceans their pincers armed and ready for the defense at a moments notice.

This image was published in the Canadian Geographic Instagram book and further selected as one of the communities top wildlife photographs from the year. 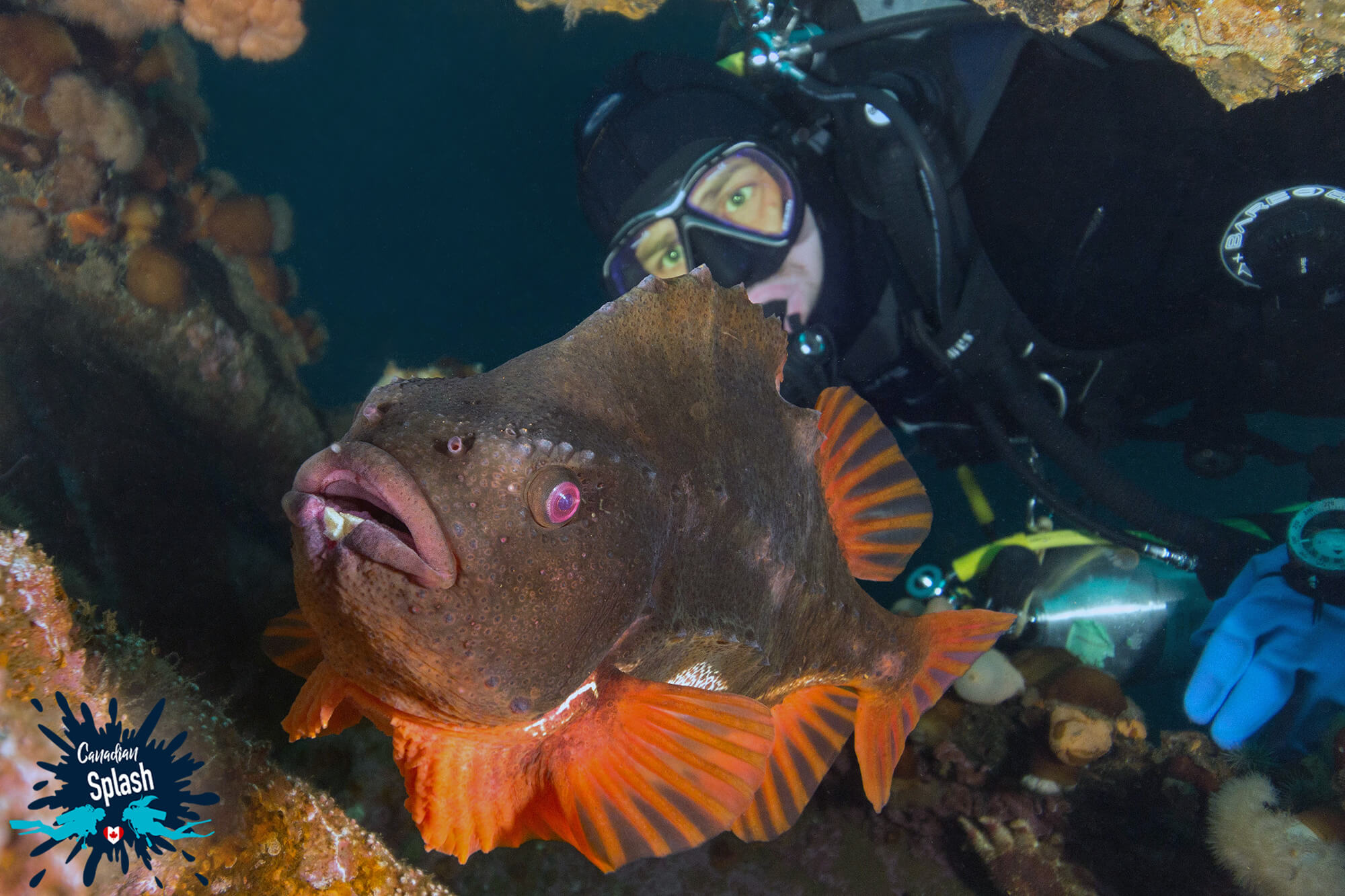 There is nothing more fulfilling on our last day of diving in Newfoundland, then hanging out with a bright red lumpfish on the SS Lord Strathcona shipwreck. Contrary to most critters, this squishy fishy seemed to love my photography lights. Here you can see how fearless the lumpfish was – letting Joey linger in the background while I photographed from the front.

While lumpfish are usually a mixture of yellows, greys, greens and browns, their coloration changes during spawning when the males become the vivid red coloration you see here.

The Freshwater version of a Lobster 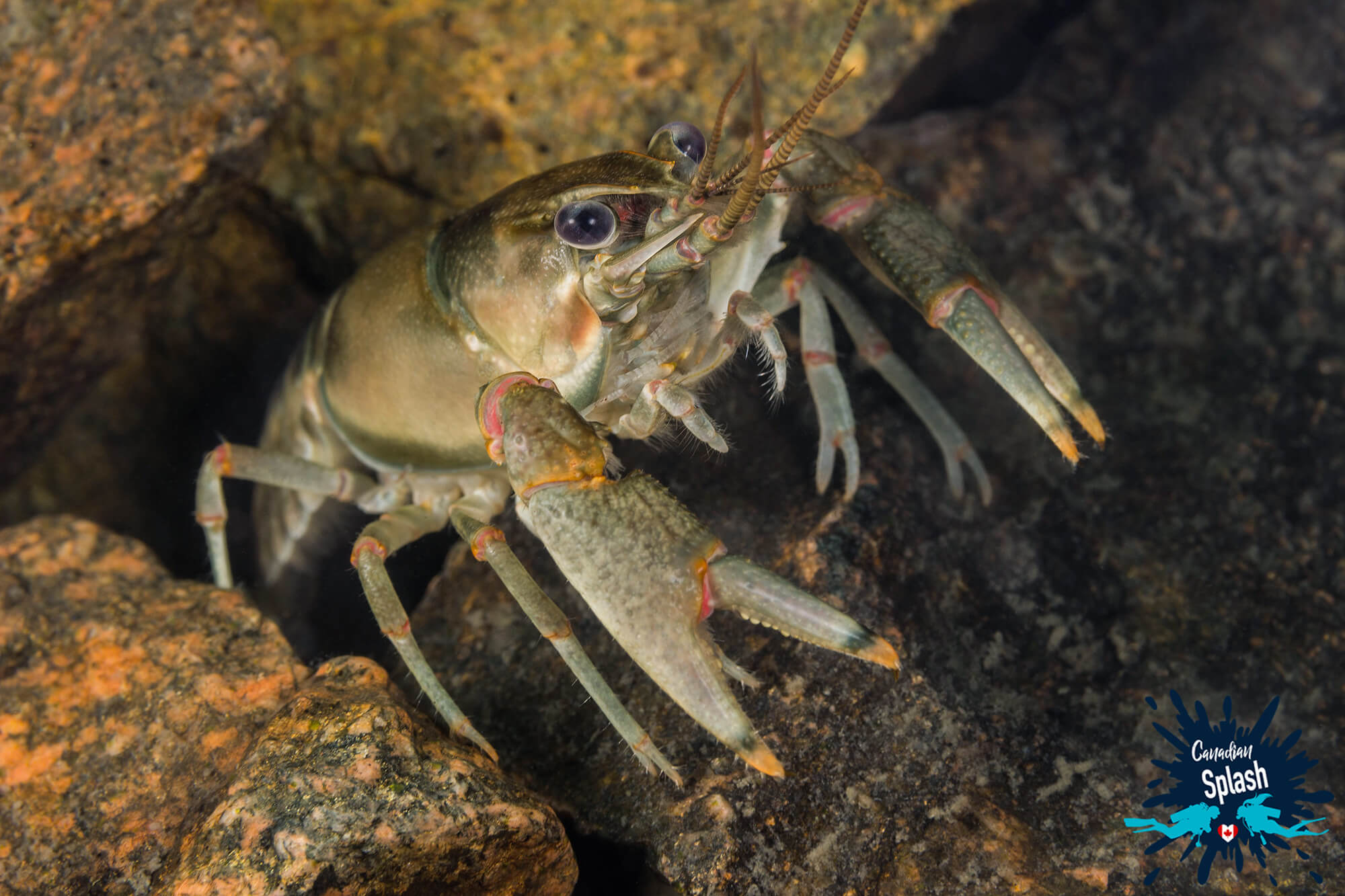 Diving into Fairbank Provincial Park on assignment with Ontario Parks was a shakeup from our regular ocean diving routine.

We are always happy to be home in Northern Ontario and explore the freshwater bounty that inland lakes have to offer.⠀

Wa-Shai-Ga-Mog is the original name of Fairbank Lake and is the Ojibway word for “clear water.” Looking at the lake, most would find it a fitting name for a place where it’s possible to see for over eight meters into the crystal-clear water. What would be an even better name for this lake would be ⁣Ashaageshiinh meaning “crayfish” as there were TONNES of these crustacean critters on the rocky bottom.

Most of the time crayfish are skittish and reclusive animals. Not in this lake.

I was able to capture many photographs of the lake’s resident crayfish out in the open foraging and walking along the bottom. 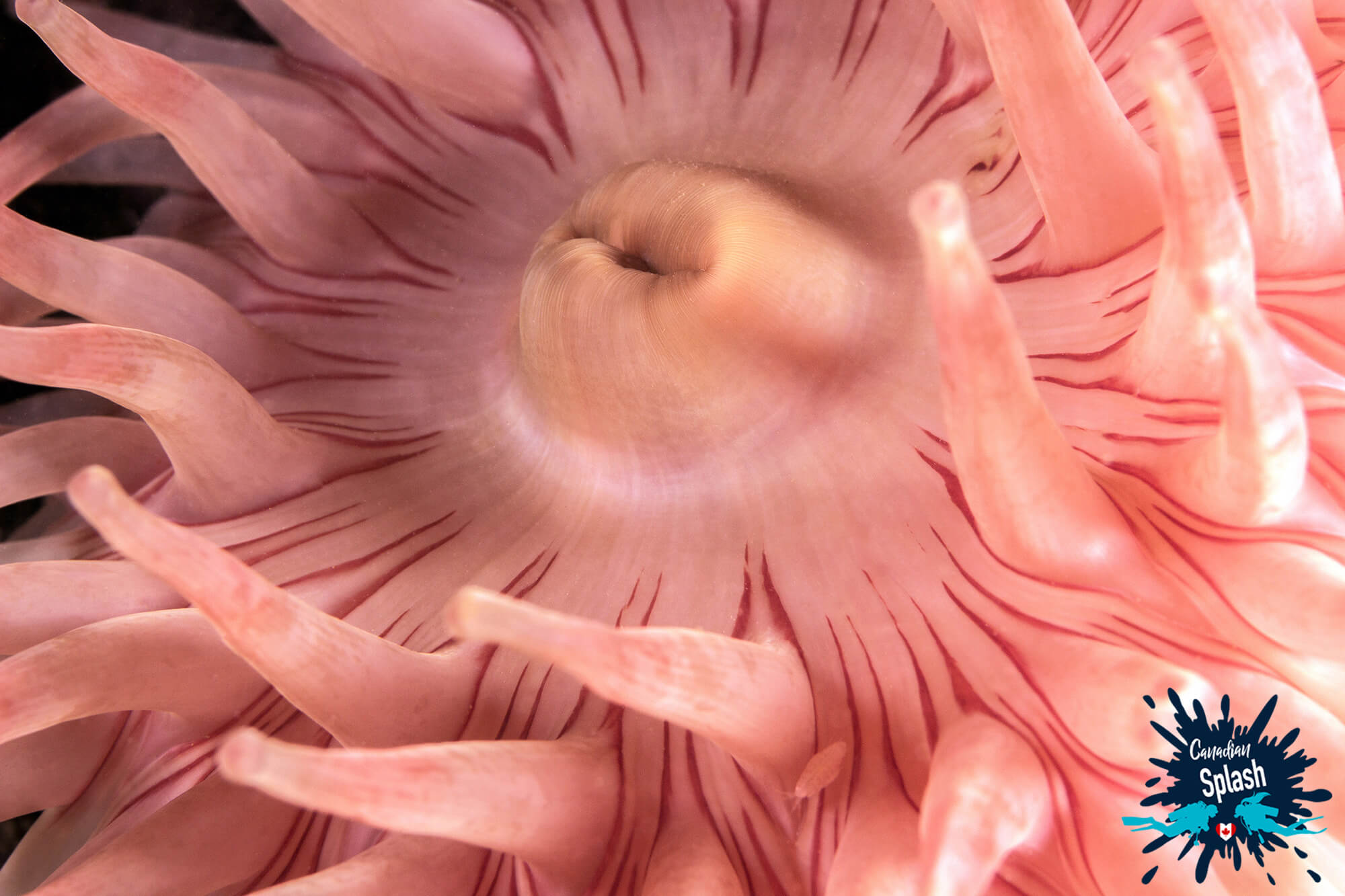 Don’t be fooled by their beauty, anemones are carnivorous animals feeding on tiny plankton or fish. Their stinging tentacles are triggered by the slightest touch, firing harpoon-like filaments called nematocysts into their prey.

This photo depicts a close up look at one of the most colorful marine creatures in New Brunswick – a Northern Red Anemone. I love finding color in the cold waters of Canada and for me, the pink and red hues on this animal seemed almost too vibrant to be true.

This Northern Red Anemone was found on Deer Island. This small Fundy islet is one of the best places to scuba dive in New Brunswick and offers walls of colorful macro life. 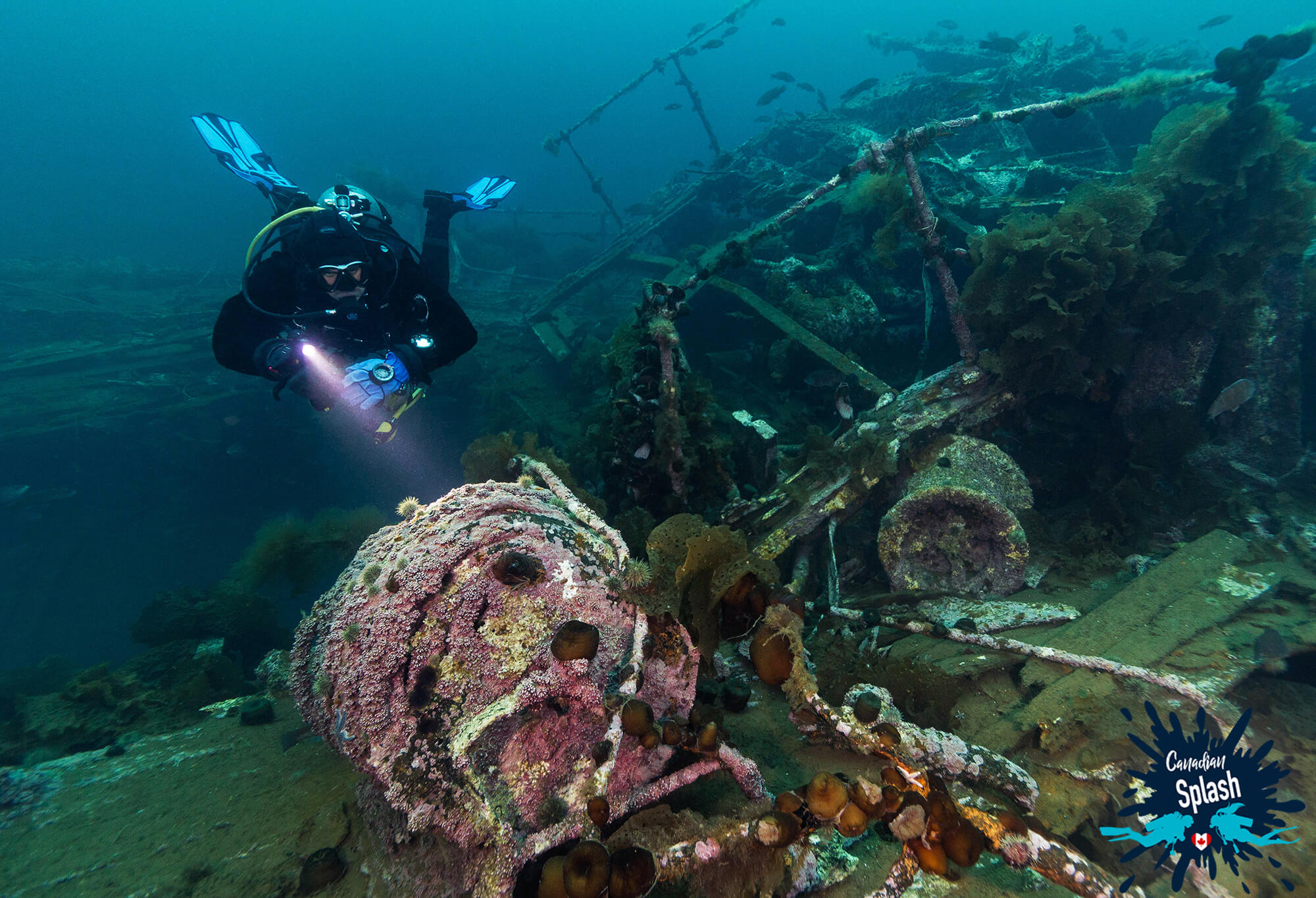 Heading underwater in Bell Island, Newfoundland ⁣is like taking a swim into the past. It’s the historic ride of a lifetime.

Bell Island is one of the few locations in North America that German forces directly attacked during World War II. Here U-boats raided the island twice in 1942, sinking four iron ore carriers. These shipwrecks now sit at the bottom of ⁣Conception Bay, and thanks to the sheltered location and cold water are very well preserved and now covered in marine life.

Here you see Joey swimming amid the rubble of the PLM 27 – the shallowest of the four shipwrecks.

The Paris-Lyon-Marseilles 27 steamship was the second ship to be sent to her watery grave on the morning of November 2, 1942. The PLM 27 was struck midships on her port side sinking in less than a minute and sending twelve crew members to their deaths. 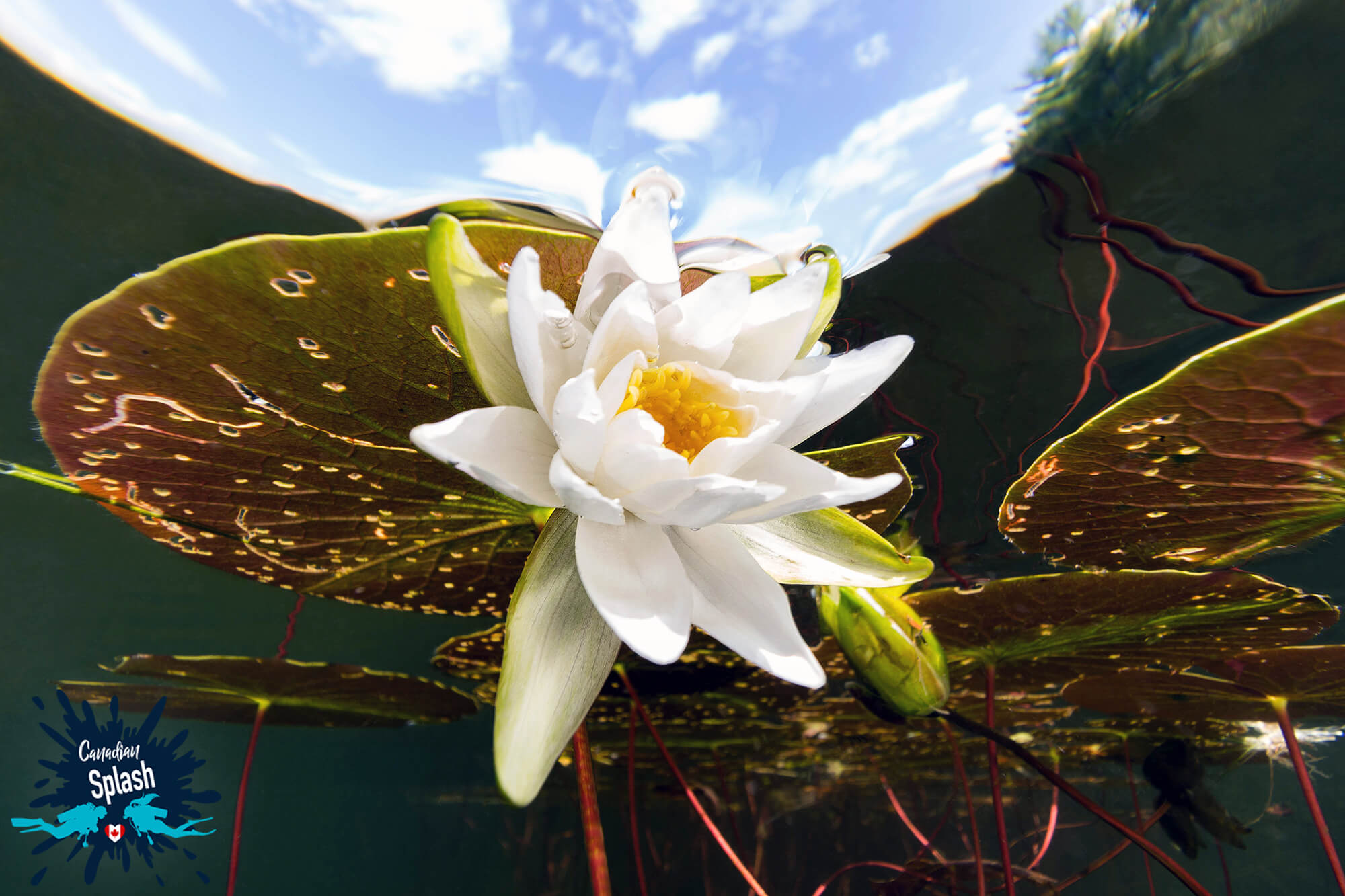 Wetlands are flowery gardens of productivity!

In terms of the plants and animals they support, wetlands are among the most highly diverse and productive environments. From the bogs of the boreal forest to deep marshes full of amphibian life, they are home to hundreds of different plant and animal species – including more than one-third of Canada’s species at risk.

It took me a long time to find this white water lily (Nymphaeaceae) among the lily pads in Finlayson Point Provincial Park. I could spend hours picking around in the wetlands of Ontario Parks photographing the beauty beneath the surface.

There’s a reason why you hear so much about the Canadian coastline and our bounty of freshwater lakes. While the water may be cold – thus far many of the diving locations have left us speechless.

From the alpine region of the Rocky Mountains, to Ontario Park lakes and everything in between, our country is full of surprising experiences; worth exploring in a new and immersive way.

For more information on the Canadian Splash project or to join us as we explore and scuba dive all over Canada, head over to Dive Buddies 4 Life and follow along! We look forward to sharing the world below Canada’s waterline with you! 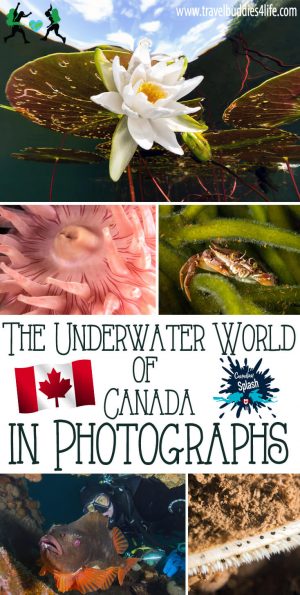