Spain: A Day in Barcelona on a Budget

How we Spent our Day Wandering the Streets of Barcelona

Ali and I are avid outdoor adventures and try to avoid the big cities at all costs. But, on our way to southern Spain from Les Cotes d’Azur, we pretty much drove right through Barcelona and felt a slight obligation to make a pit stop in this world renown city.

The Architecturally Inclined City of Barcelona

Everybody’s heard of Barcelona, one of Spain’s largest and most touristic cities.

Barcelona sits between the sea and the mountains in the Catalonia region of Spain. This city is alive and vibrant, filled with Roman remains, delicious dining, and some of the most renowned architectural works of the modern time. Some of the great names that have left their treasured mark on this cosmopolitan city include Dali, Miro, Picasso and of course Gaudi.

A visit to this city is like walking through an innovative and artistic open-air museum. Here tourists can observe the past collide with the present in an architectural wonder. 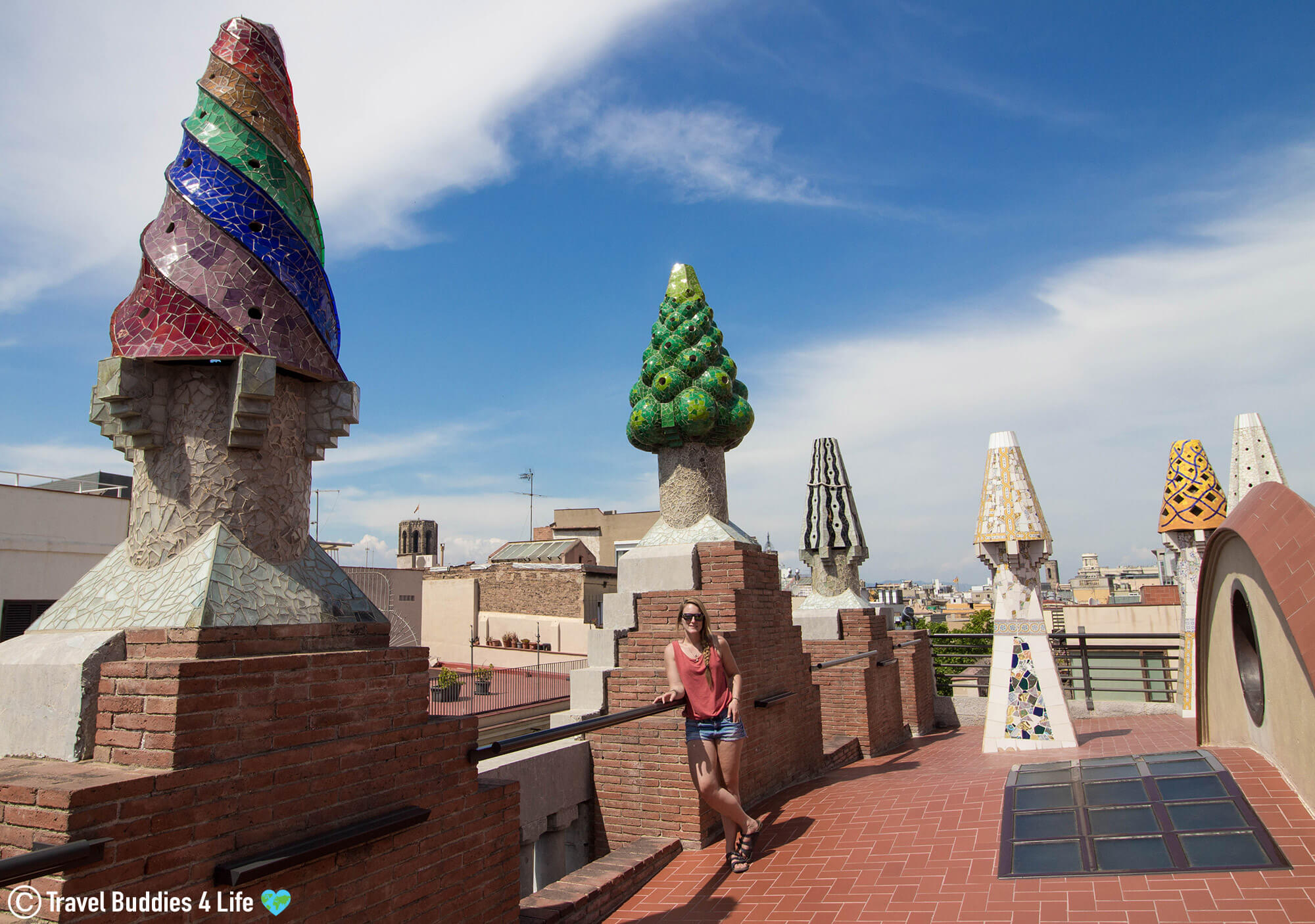 Barcelona on a Budget

Since we are always traveling, we like to spend our money wisely. As much as we’d like too, we can’t just dive into every attraction a city has to offer.

Because Barcelona is one of Spain’s most touristic cities, as you can imagine, it is a little expensive. When you start considering, food, parking, tours, museums, lodging, it can be easy to blow your budget right out of the water.

During our day in Barcelona, we decided that instead of spending Euros on museums and tours we would instead spend the bare minimum on parking and walk the city starting at the famous Sagrada Familia (Gaudí´s temple) and ending near the waterfront at the Mirador de Colom (Columbus Monument). 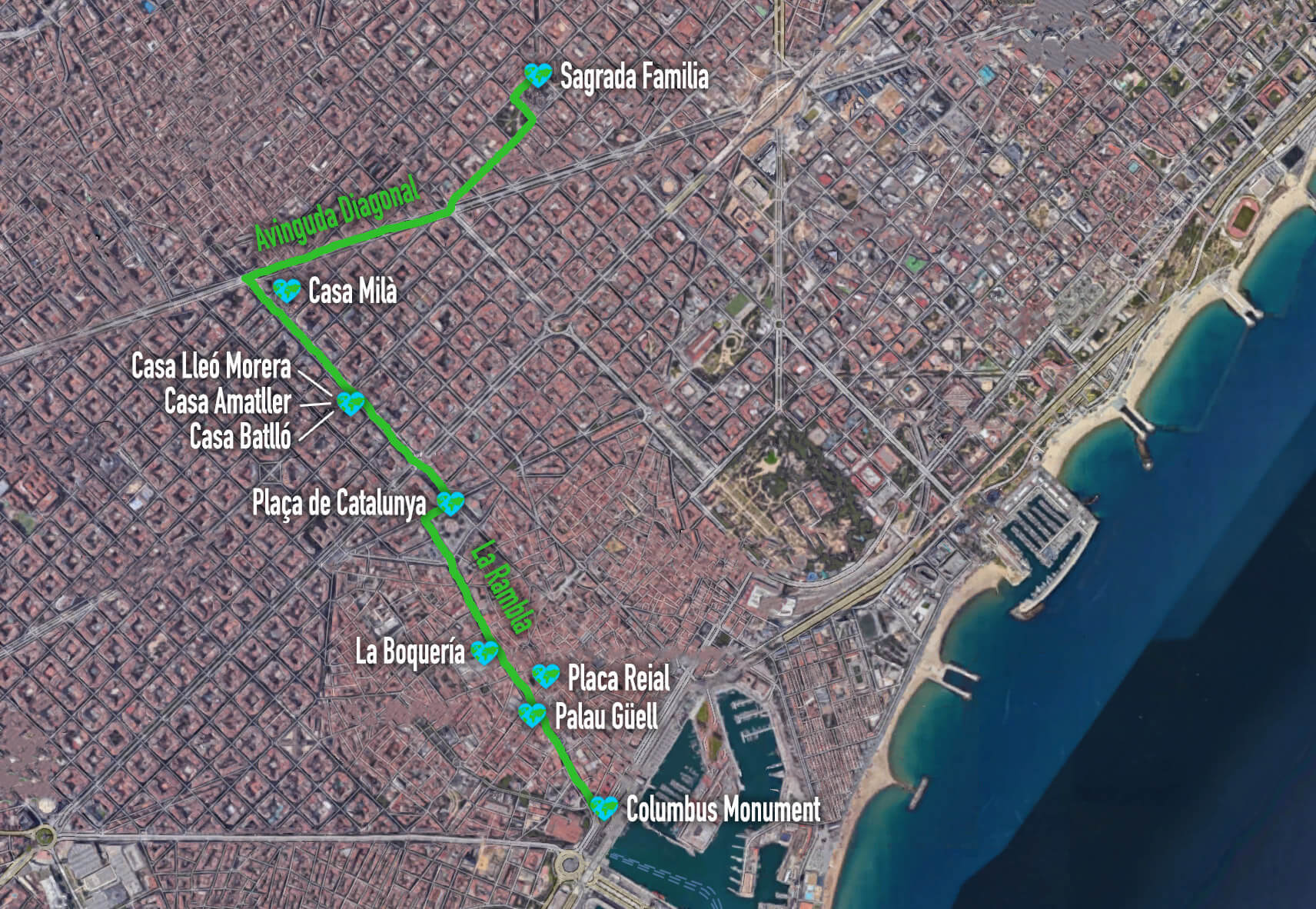 So what can you expect to see along the route we walked?

We were super pleased with our pre-planned route through Barcelona. It was conveniently walkable allowed you to pass by at least 12 of the cities highlight area in less than 6 kilometers.

Here are some of our favorite Barcelona sights:

You’ll see a lot of Antoni Gaudi’s work around the world, but his life work is the Sagrada Familia cathedral.

In 1882, Francisco de Paula del Villar finished his cathedral designs, and construction began. One year later Gaudi became involved in the development and made the cathedral his own by modifying Francisco’s blueprints from neo-Gothic to a Modern approach. Gaudi’s design envisioned 18 towers and enough room in the church for 13,000 worshipers.

Unfortunately, Gaudi never got to see the cathedral completed. At the time of his death in 1926, the buildings Nativity Façade, apse, crypt, and only one tower were complete.

Fast forward to 2018 and the cathedral is still not completed. If you visit the Sagrada Familia, you’ll see eight towers and the second Façade (The Passion Façade which displays Jesus his Crucifixion) completed.

Fun Fact: If you look closely at the Sagrada Familia you can tell that it’s been under construction for a long time because the color has aged more on the original buildings.

All those involved in the continued construction of the cathedral hope that by 2026, the 100th anniversary of Gaudi’s death, everything will be finished. 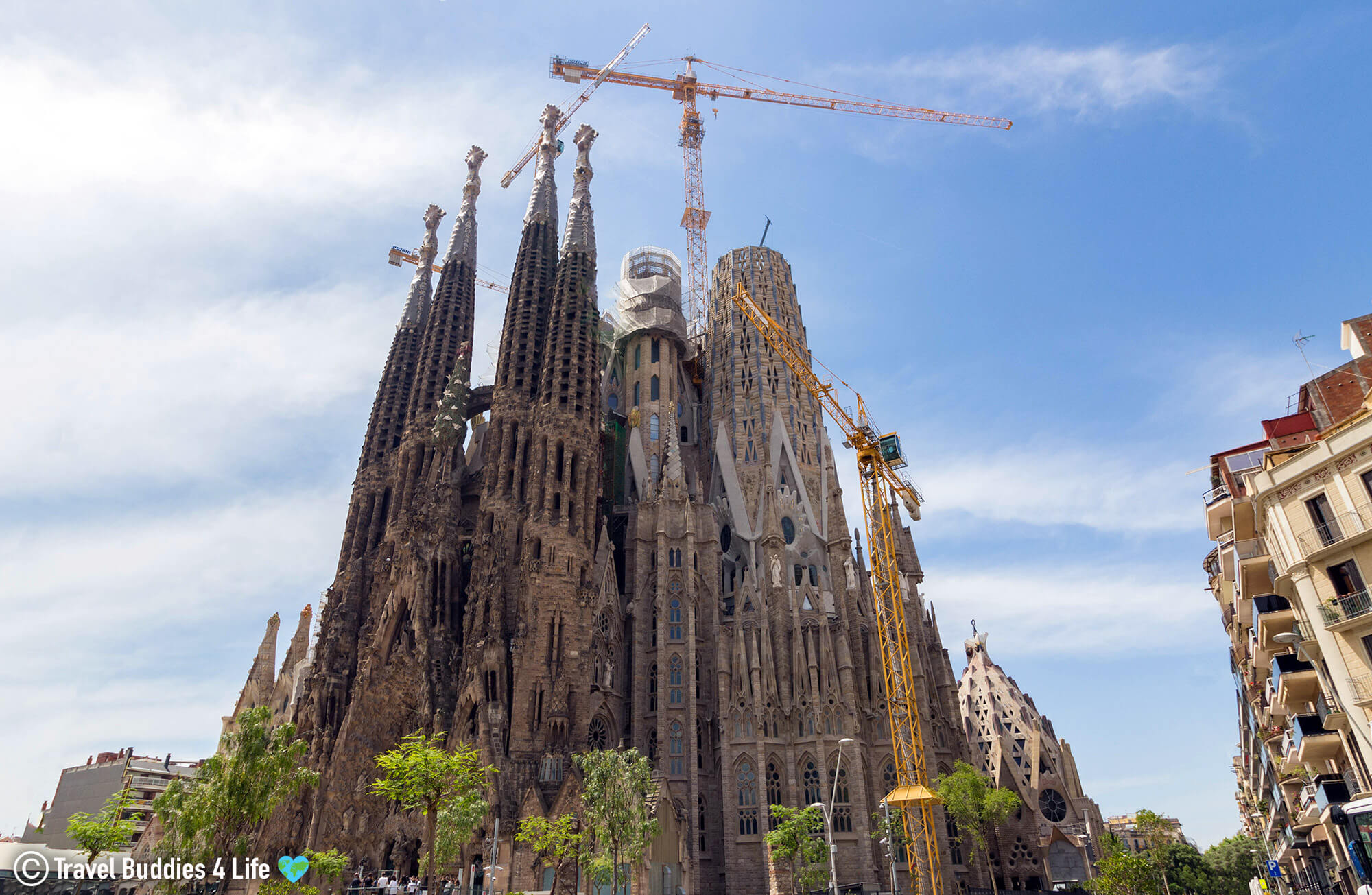 *To save time and money it’s suggested to get tickets in advance. And as with most places in Barcelona, you’ll get a reduced price by using the Barcelona Card.

From the Sagrada Familia cathedral, it’s a little way to the next big historical site. So what better way to get there, than to stroll down one of Barcelona’s broadest and most important avenues?

Diagonal Avenue runs from west to east, dividing the city of Barcelona in two. The avenue features stores, hotels, shopping centers, and even cinemas. There are also a few architecturally imposing buildings such as Casa Serra, Casa Comalat, Casa de Terrades, Casa del Baro de Quadras and one of our personal favorites Torre Agbad. 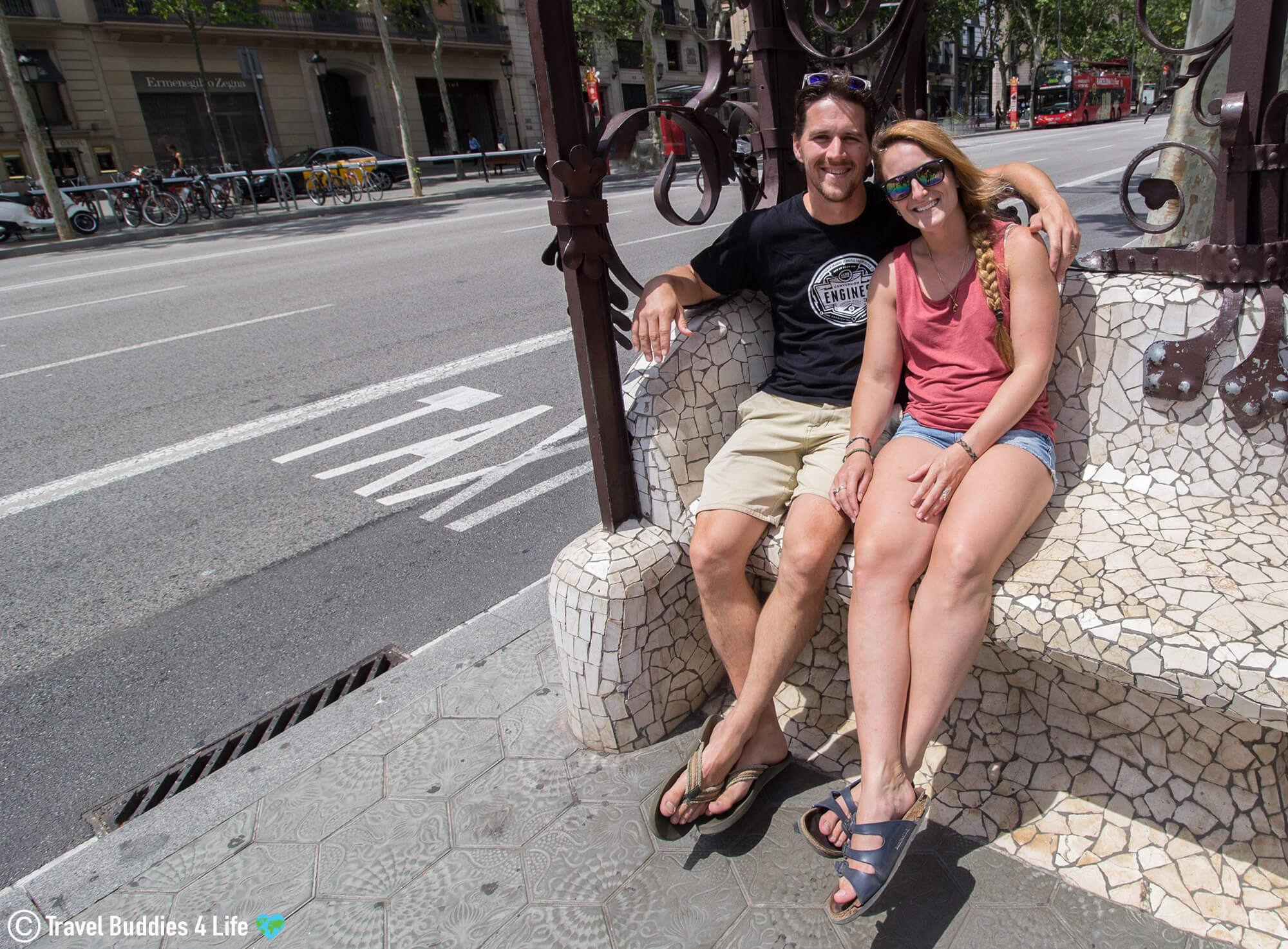 Casa Milà is the first of many houses created by Gaudi. The building was erected in the early 1900 and has been officially adopted as a UNESCO World Heritage Site.

This house is one of Gaudi’s most significant civic buildings and has no load-bearing walls. Instead, it uses columns and beams to support itself. You will also notice that Casa Milà has no straight lines which make for a unique exterior wall that seems to represent waves on the front of the building.

Casa Milà can be admired from the outside or inside, depending on your budget. 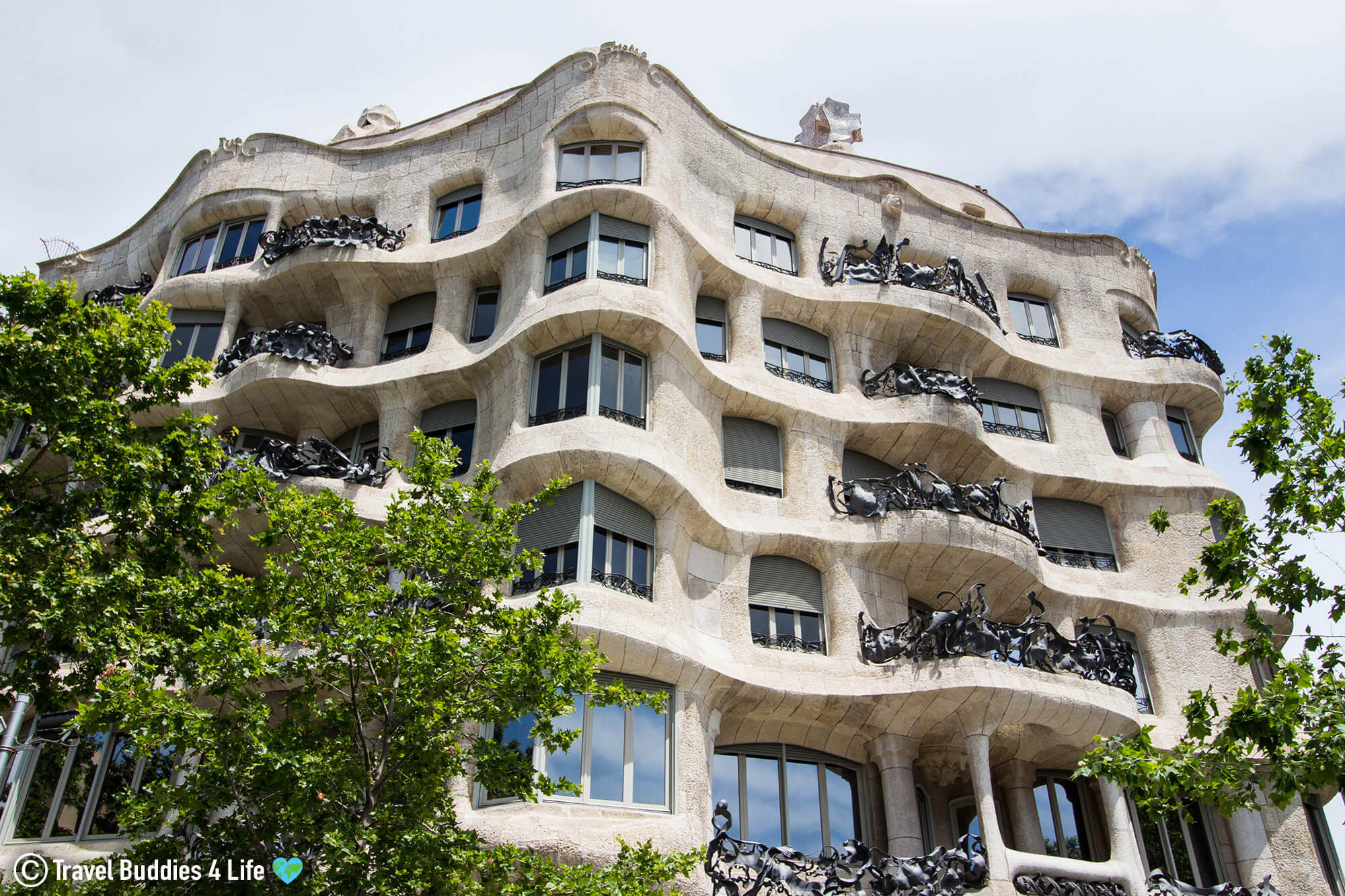 In the building, visitors can head to the attic and the top floor that have the some of the unique designs seen on the outside. On the roof, you’ll see chimneys with Gaudi’s trademark mosaics which make them look more like an art piece than working chimneys, but they are actually functional.

Casa Batllo is a super funky looking building, with wavy lines, small pointy balconies, pillars that look like bones wrapped with flowers, and an exterior covered in a mosaic of colored glass and ceramic pieces. Some locals even say the building looks like the back of a dragon.

Casa Batllo is another one of Gaudi’s 1904 architectural creations.

If you look closely at the house, you’ll see that some of the balconies show as a masquerade masks.

The funkiness continues inside Casa Batllo with the spiny banister, mosaics, stained glass, massive skylight and a wooden elevator (that still can be used).

Casa Amatller is the second of three important houses in this area. Together Casa Amatller, Casa Batllo and Casa Lleo-Morera form the “Block of Discord,” a street block in Barcelona displaying famous architecturally savvy buildings.

Casa Amatller was redesigned by Josep Puig i Cadafalch and includes building styles from Germany and Holland. The stepped roof is a typical Dutch design of their “Grachten Pandjes,” and the Gothic windows are typically German. The outside of the building features stained glass windows, knights, dragons and other cool figures.

The ground floor of this house is open to visitors, and you will undoubtedly see some neat designs but the thing that especially interested Ali, was that the house belonged to a chocolatier back in 1898. Who doesn’t love chocolate!

Casa Lleó Morera is the last building in the “Block of Discord.” If you look closely, you will see the wedding cake shape in the little tower up top!

After a bit more of a stroll along the Passeig de Gracia, the road will open up into a huge public square. There is no mistaken your arrival at Plaça de Catalunya. It’s enormous, it’s busy, and there are traffic and people everywhere.

Plaça de Catalunya is known as the Barcelona’s busiest square. Nine streets converge in Plaça de Catalunya and it’s the connection point between the old city and Eixample district (small towns that eventually got swallowed up into Barcelona).

The square has a couple of fountains that light up at night. It also features a department store, several theatres, cafes, restaurants, hotels, banks and a major underground transport hub with metro lines, railways and subway stations. 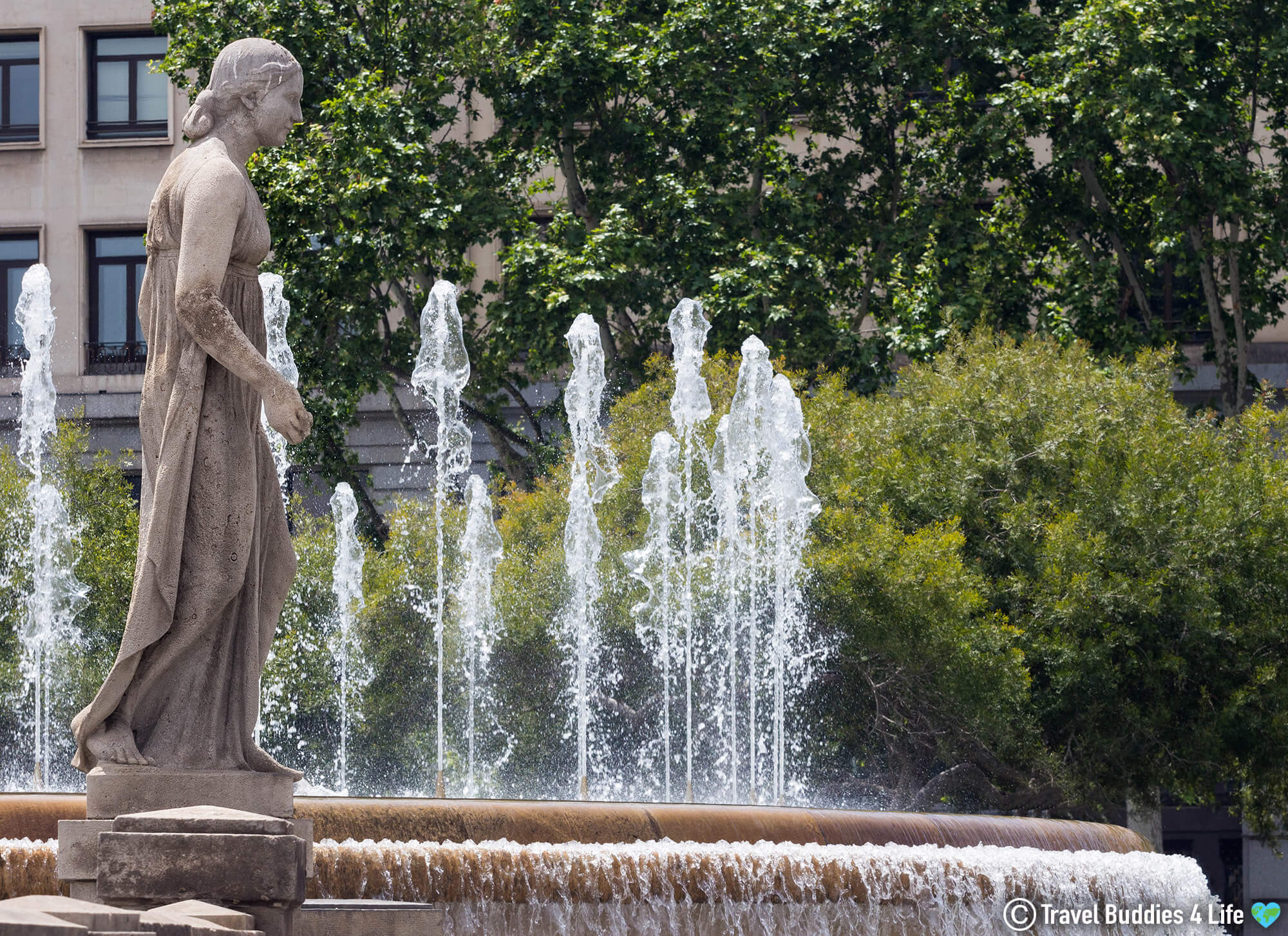 La Rambla boulevard is your next stop, and it is just over a kilometer. There are a ton of historic buildings on both side of La Rambla, which was originally a river but when it dried up in 1766.

The long street has a nice pedestrian-only section running right through the middle and little vendors everywhere. There is also a Wax and Erotica Museum, street artists, souvenir stores and tonnes of street performers.

The Mercat de Sant Josep de la Boqueria is a big market located at the start of La Rambla.

The market has all kinds of items but specializes in fresh produce. With over 900 stalls you can find pretty much any food you are looking for. Maybe the most unusual for tourist is their unique foods like bulls tails, black eels, and pig ear. Taste at your own risk!

In addition to the strange food, if you’ve always wanted to take cooking lessons you’ve come to the right place, there are a few different culinary classes offered right in the market.

In spite of being a big square Placa Reial or “Royal Square” is a little tricky to find. This square is hidden by surrounding buildings in Barcelona’s Old Town.

Placa Reial used to be an old monastery, but the city acquired the space in the early 1800s. The monastery burnt down shortly after the town got their hands on it, and so began the planning of a new square which was completed in 1859.

The square has an Italian vibe, and the palm trees give it a tropical feel. In the 1980s the square was converted to be a pedestrian-only zone which made it a popular area for tourists and locals to enjoy an oasis in the middle of Barcelona. 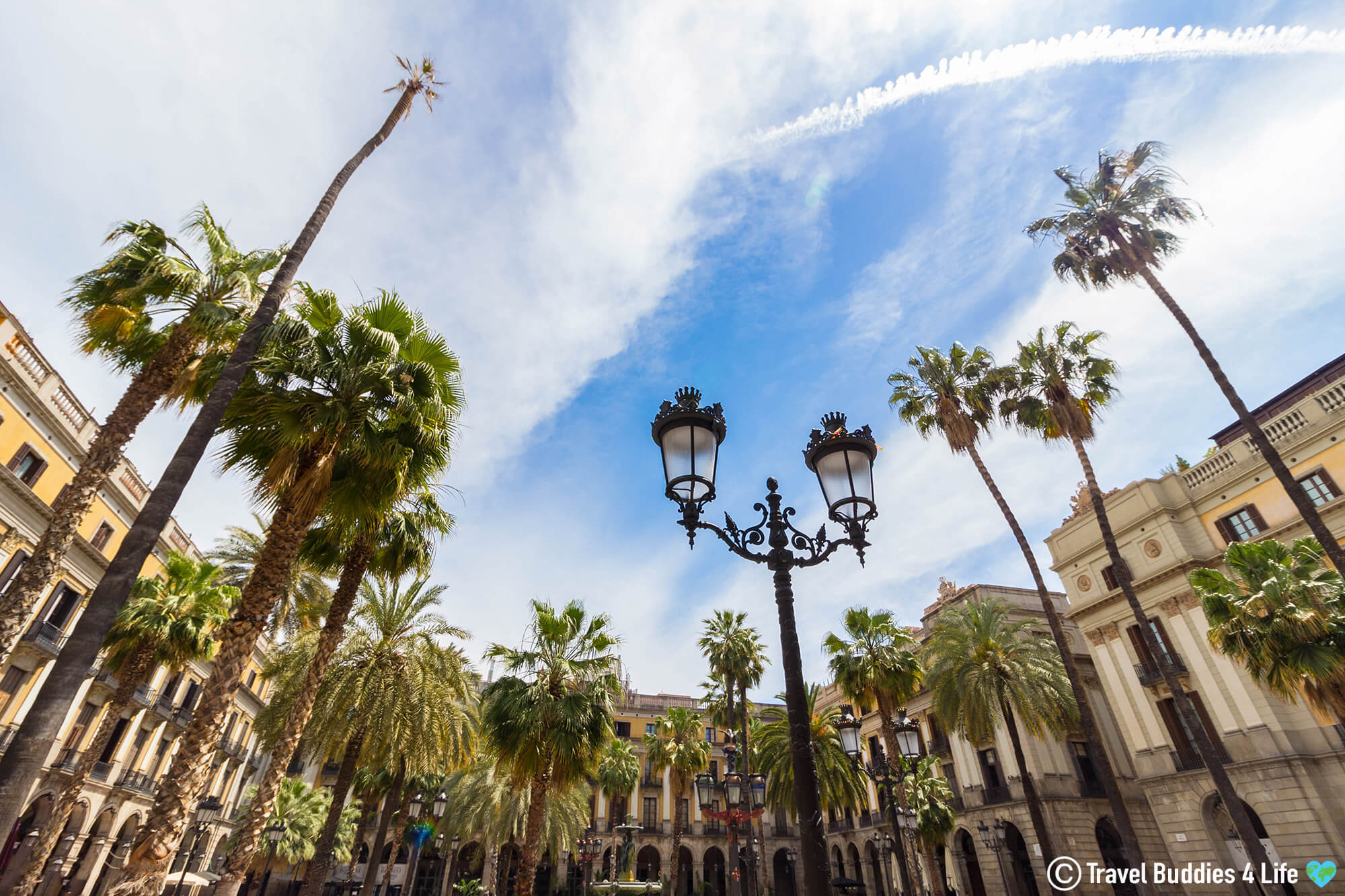 Güell Palace is literally 20 steps off of La Rambla into a side street. The Palace was designed by Gaudi in 1888 and is now a UNESCO site. The entrance to the building is especially impressive and probably the reason why I headed over to ask what was behind the iron entrance gates.

Lucky for us on the day we visited Barcelona, entrance to Palau Güell happened to be free, so we got to take a look around the mansion without paying the €12 tour price.

Interesting fact: During the Civil War the building was used by the police for torturing political prisoners.

The building, on the whole, was magnificent, but for us, the most impressive thing was the Doctor Seuss-like rooftop. The main roof was built in a wavy formation with colorful peaks and glass covered mosaics jetting out every which way. At some places, I would get that odd moment of vertigo trying to walk on this topsy-turvy mansion. 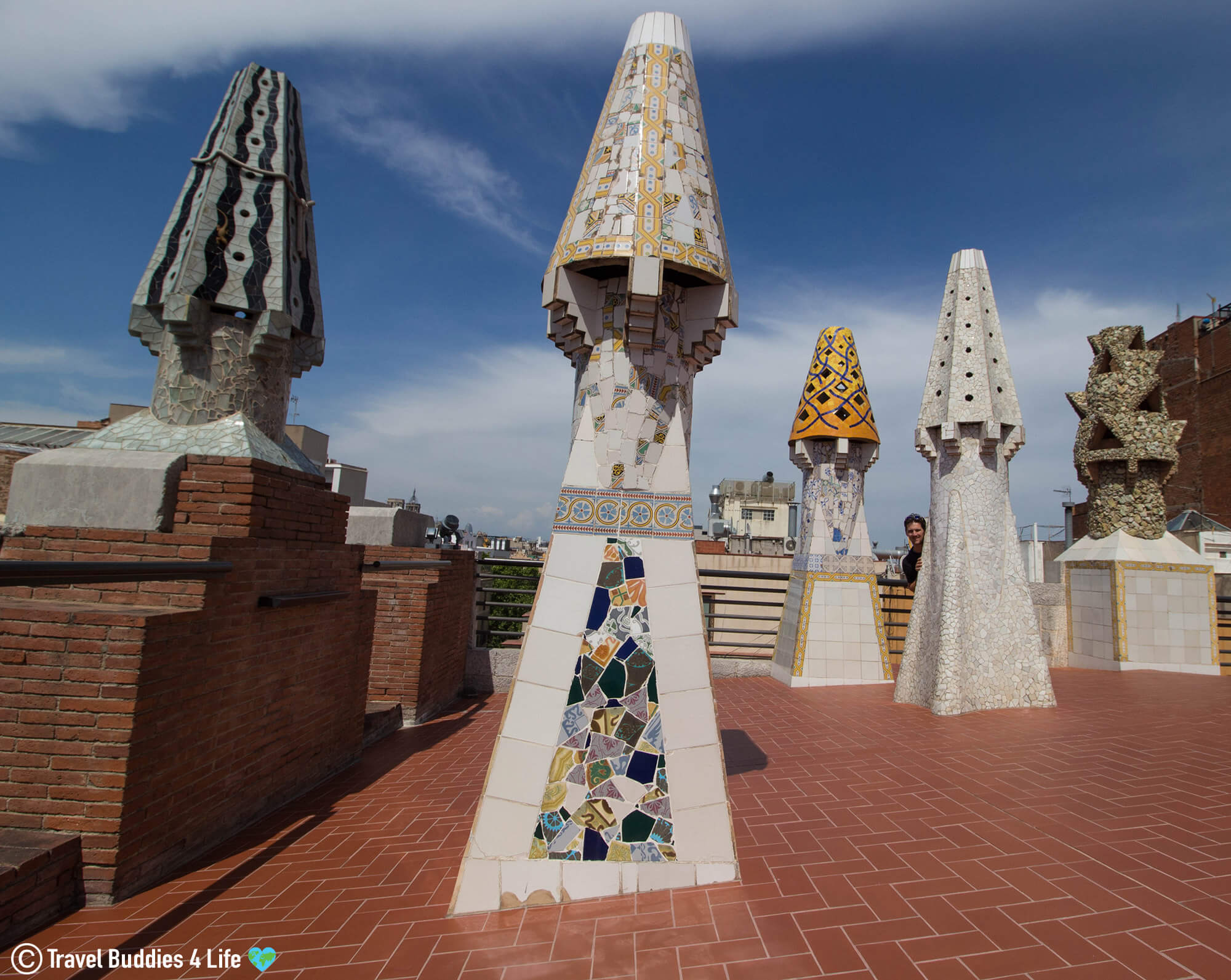 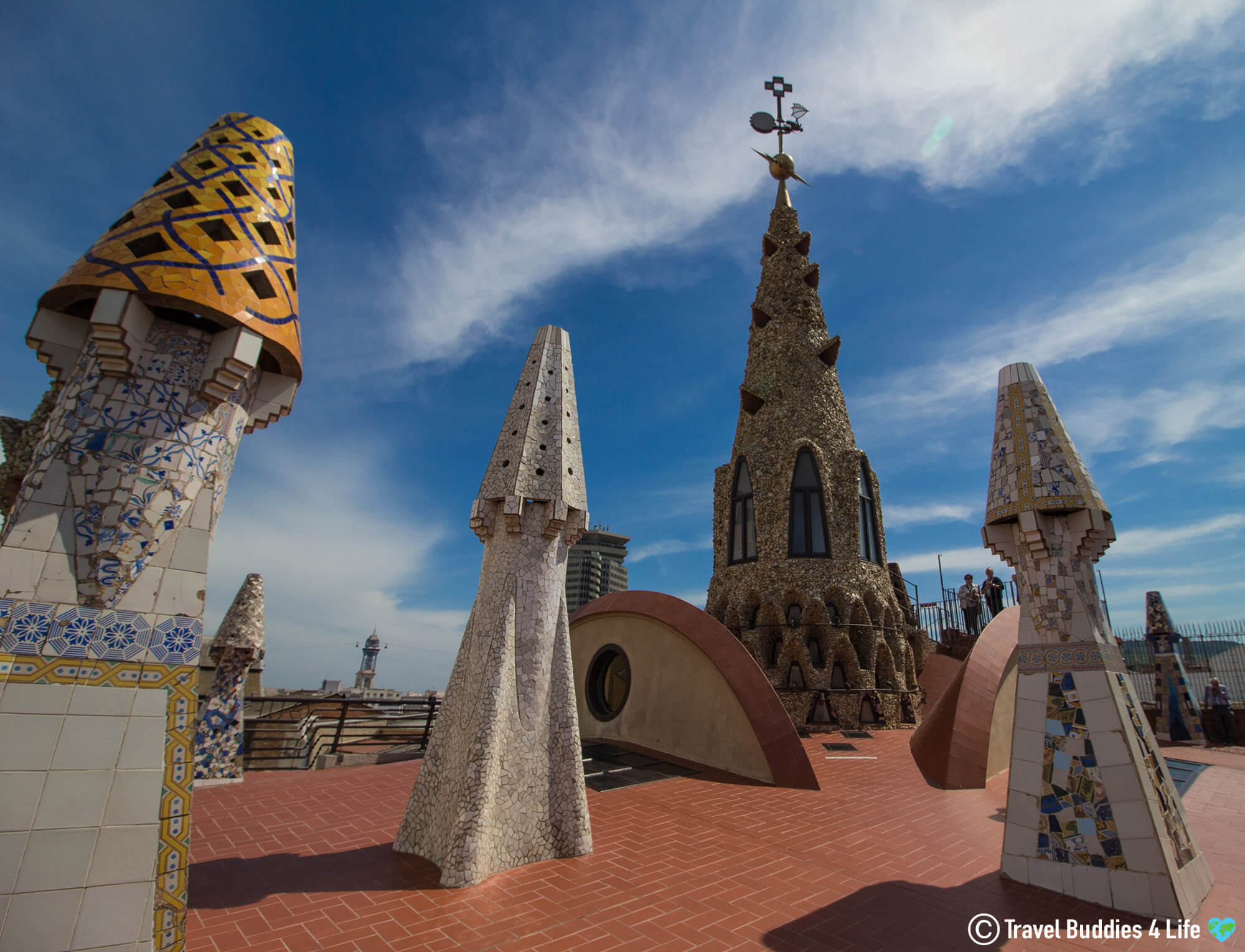 The last stop on our walking tour of Barcelona was at the Columbus monument at the end of La Rambla.

The display features a 60 meters wide stone base with a 60-meter iron column sticking high up in the air. The top has a 7.5-meter tall bronze figure of Christopher Columbus standing on top. This big monument is a tribute to Christopher Columbus for his discovery of the New World (America). Surrounding the statue, there are eight lions and eight bronze plaques with Columbus’s accomplishments on it.

More Historic Places in Barcelona worth Checking Out

For you museum buffs out there, if you are looking for more culturally inclined things to do, don’t worry Barcelona’s got you covered. Not too far from the La Rambla boulevard are a few fine museums to check out which are all within walking distance from one another: 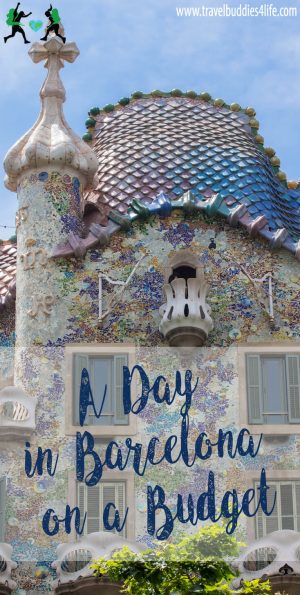