The quiet and coastal country of Slovenia is one of the lesser known European regions. Looking around at the landscape as we drove through made me feel very much like I was back home in Canada. A dense forest of trees could be seen almost everywhere, and the highways had shoulders broad enough to fit two vehicles side by side.

The weather in Slovenia had been dull, grey and rainy since we crossed the border. It was the most rain we’d seen since arriving in Europe a mere month ago. We went almost an entire week straight without seeing the sun.

But what would have been depressing for most, turned into a productive work week and eye-opening travel experience for Joey and me. We had arrived in this unheard country with no expectations and left a week later craving more. Slovenia is an outdoor enthusiast’s playground!

I am pleased to announce that we finally know what it is like to be earthworms.

During our stay in Slovenia’s Karst region, Joey and I got to spend some of our time exploring the Skocjanske James underground cave network (also known as the Škocjan Caves).

The Škocjan Caves are a unique natural phenomenon of the Karst region of Slovenia. The caves were created by an underground river springing from beneath the Snežnik plateau and then carving its way into the limestone rock surface of this mountainous region through years and years of erosion.

Skocjanske James has been a UNESCO world heritage site since 1986 and remains a renown region of Europe known for its exceptional archaeological finds, explorations and distinctive aboveground and subterranean karst phenomena.

Journey to the Center of the Earth in Slovenia

It took us about one hour to navigate the backroads of Slovenia and find our way to this UNESCO heritage site. The drive in an of itself was an easy one. Twisting and turning up and down the side of mountains, Slovenia’s rugged terrain and forested landscapes were well marked and only had a handful of main highways.

When we arrived at the location, we had about 30 minutes to kill before our guided tour departed for the caves. No problem! Joey and I ventured into the basement of the visitor’s museum and immersed ourselves in the pool of information on the cave system that we were about to bury ourselves in.

Before we departed for the cave, our guide gave us a short and not so sweet safety briefing. Unfortunately, the facility had some pretty strict rules surrounding the use of cameras and technological devices in the cave. 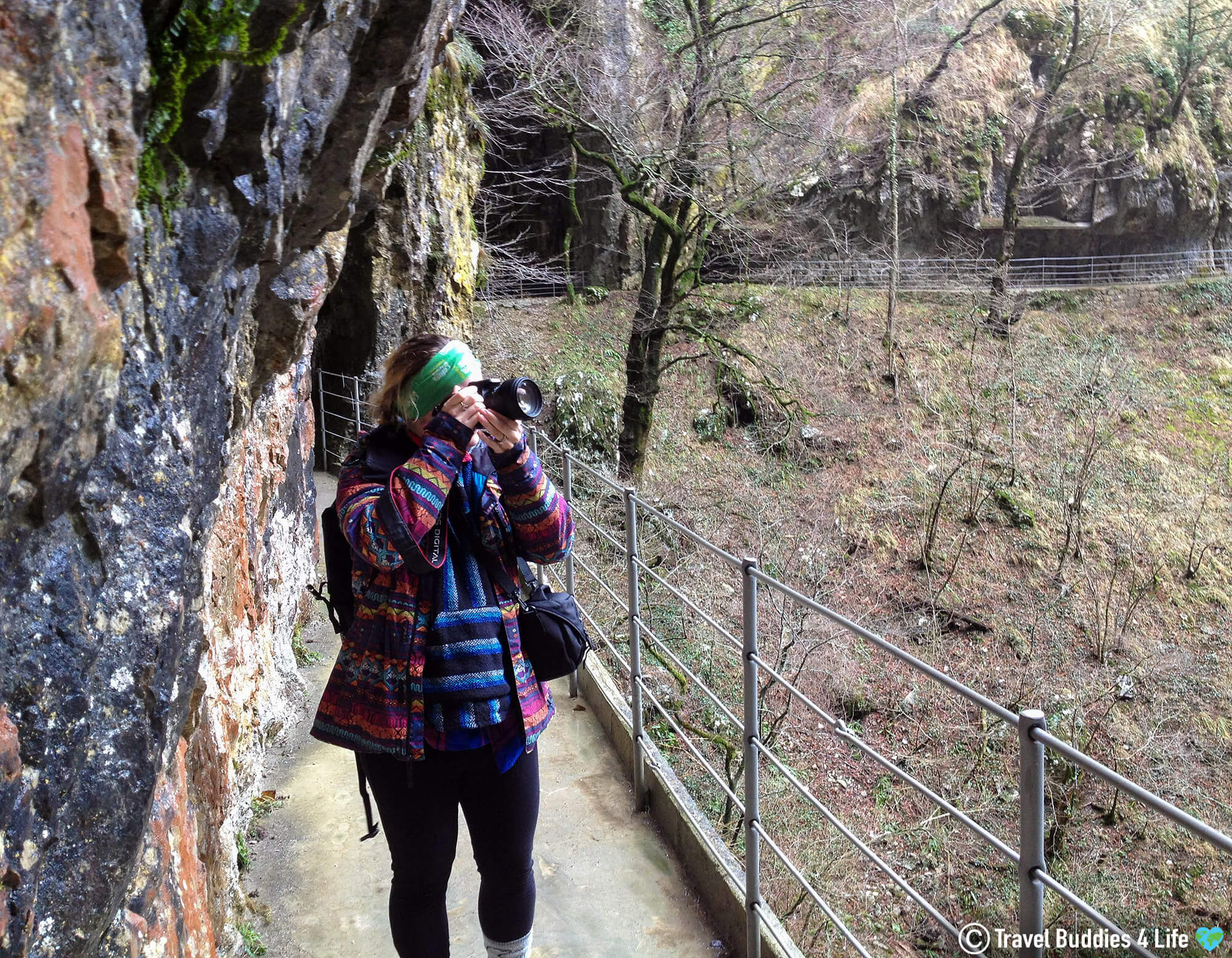 I was bummed out when the tour guide told us we wouldn’t be able to take any video or pictures once we were down in the cave.

Our group of 10 hiked for less than a kilometer when we arrived at the gated entrance. One by one we entered through the jail-like bars, kissing the forest and the bright sky goodbye and walked deep into the heart of the mountain. 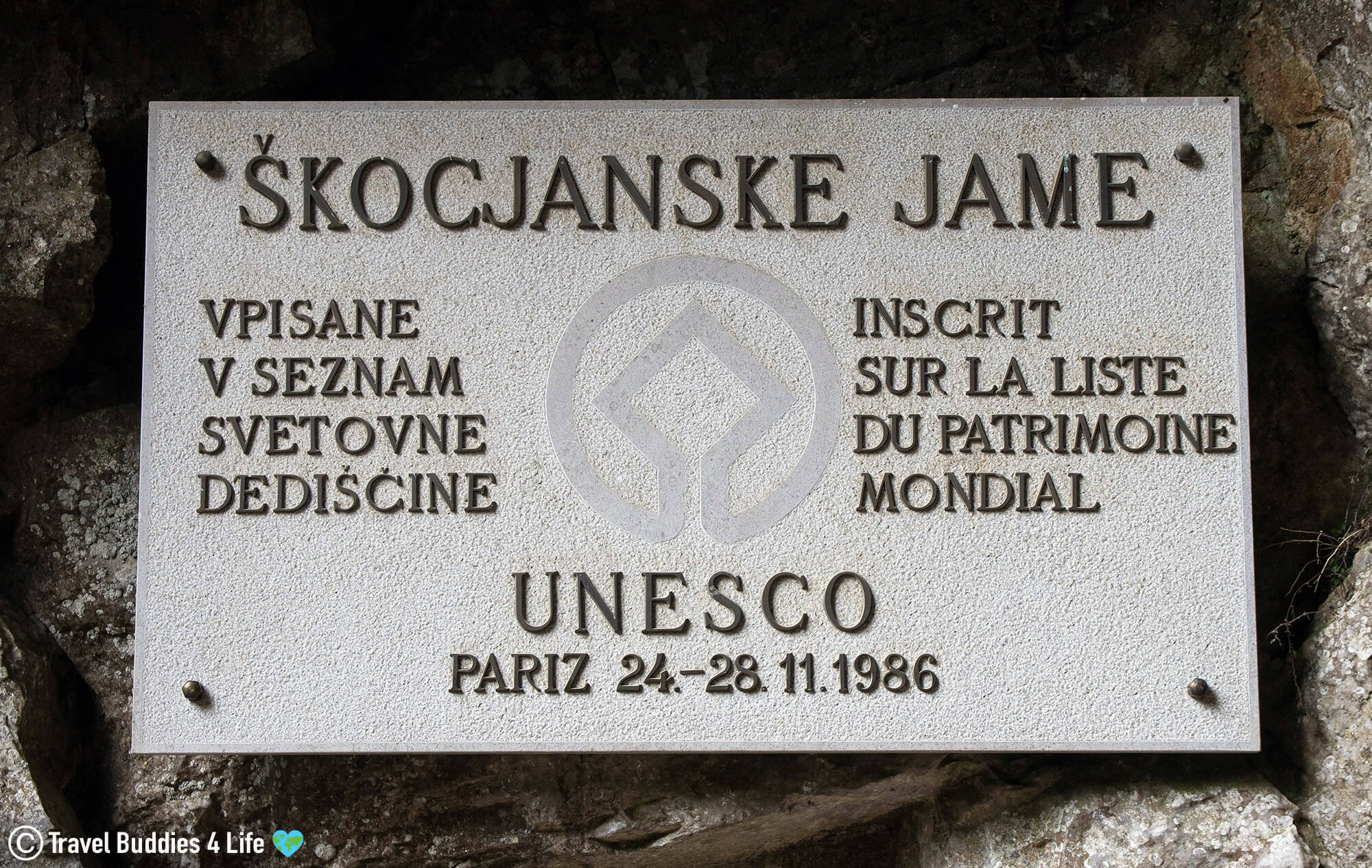 Descending into the Skocjanske James

Words cannot describe how amazing it was entering the velvet underground. Carved over the years by the underground Reca River, the Skocjanske James is a natural masterpiece hidden away in the bowels of the earth. I could instantaneously see why this cave is ranked as one of the most important in the world.

This particular microclimate created thanks to the underground river and cave, have given rise to a unique ecosystem allowing Mediterranean species and high altitude alpine species to grow side by side – something that is exceedingly rare in nature.

We started off in the Tiha Jama, the silent cave. As I looked around, I could see three hundred meter thick walls of limestone dripping with fragile icicle-like stalagmites and stalactites. It was pretty quiet with the occasional dripping of moisture from these pointy stalactites.

I felt like I was in Aladdin’s cave of wonders!

We walked over the Cerkvenik Bridge, suspended nearly 50 meters above the river into the second cave, the Tominceva Jama or Murmuring Cave. This cave was a lot noisier than the previous section mostly because it runs right alongside the thundering Reka river. It was so loud that it was impossible to hear each other talking.

As we walked through the black abyss of water and rapids flowing aimlessly through the cave, we arrived at the most extensive section; Martel’s Chamber. Measuring 308 meters long and 106 meters high this part of Skocjanske James is the largest discovered underground chamber in all of Europe. From the pathway, I looked down into the watery pit and could see the minuscule headlight of a distant caver climbing on the rocks below. Apparently, die-hard cavers can get special permits to explore and climb parts of the Skocjanske James that are off-the-beaten-path. 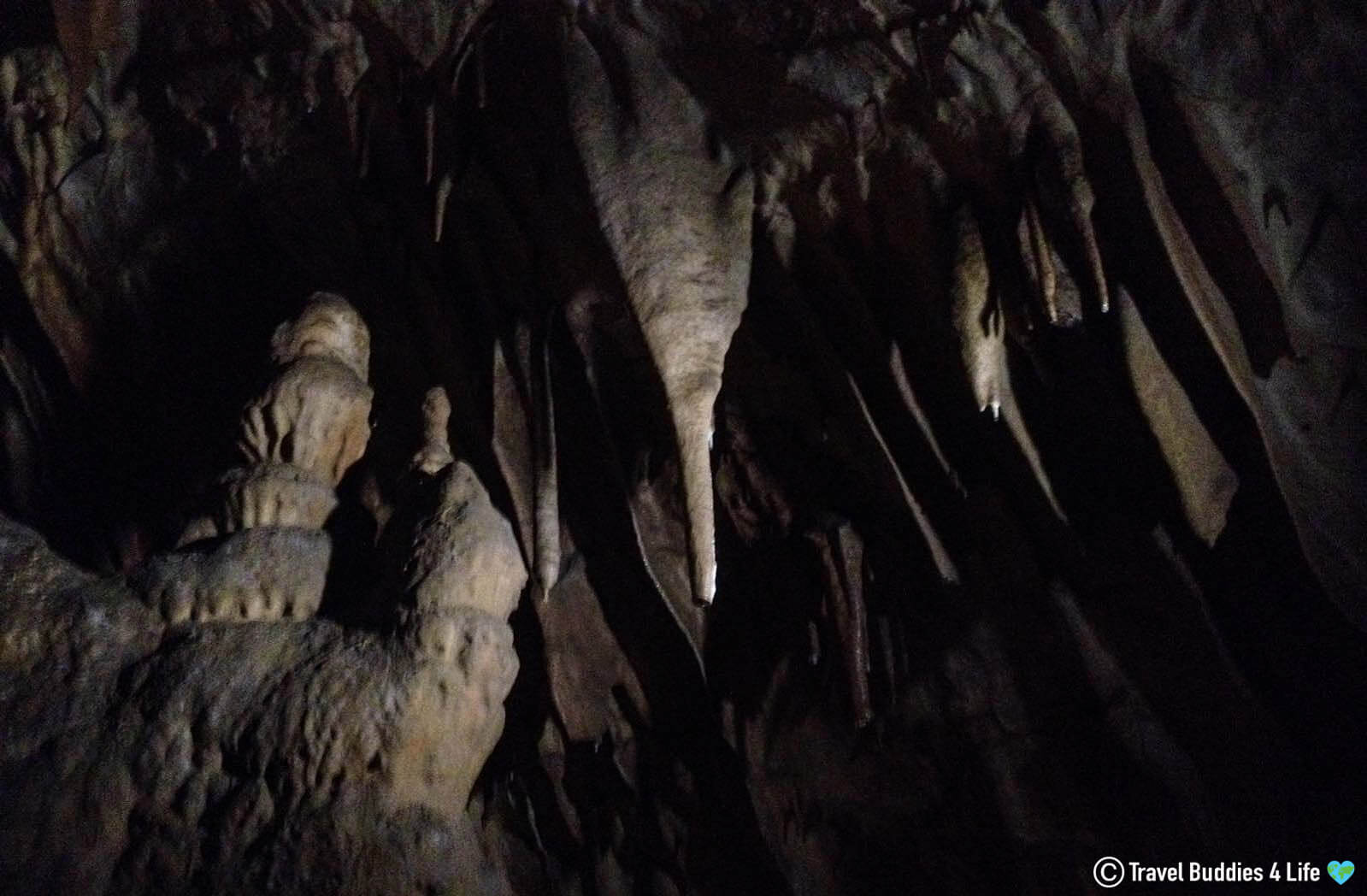 During our tour, I had to constantly remind myself to close my mouth to keep from drooling. Closing in on the home stretch of the tour we crossed the large natural bridge in the Big Collapse Doline (Velika dolina). After this, we slowly made our way out of the uncanny darkness and into the sunlight of the caves gaping mouth.

Prince Ali had emerged from the depths unscathed.

What you Need to Know about the Skocjanske James

For anyone itching to stroll through this cave system it is important to know that while it is impossible to allow tourists access to the entire 6,200 meters of the cave, there are two sections to the Skocjanske James that can be visited; path 1 and path 2. 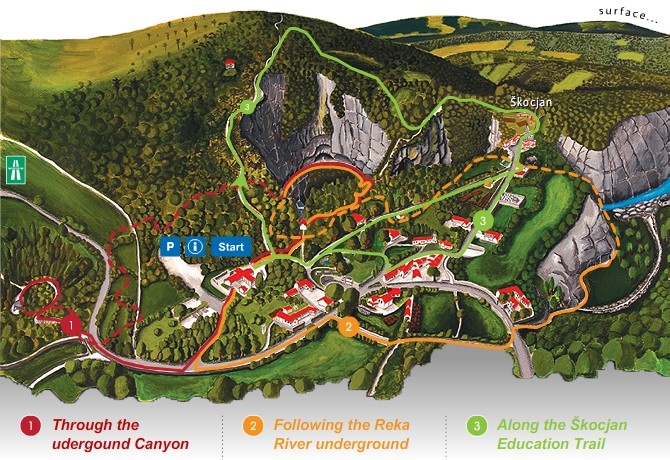 Path 1 takes you through Tiha Jama, the silent cave, across the Cerkvenik Bridge into the Tominceva Jama or murmuring cave and to the surface via the Big Collapse Doline (Velika dolina). This path can only be walked with a guide and is open year round.

Path 2 allows you to enter the cave through the natural entrance and takes you along the Reka river just above the water line. Along the way, you will see the Little Collapse Doline (Mala dolina), the Big Collapse Doline (Velika dolina) and the Tominc Cave (Tominceva jama). This path can be walked with or without a guide and is only open from April to October. What is neat about path 2, is that you will get to see the resident bats (Miniopterus schreibersii and Myotis capaccinii) that can number in the 1000’s living in this section of the cave.

Following our underground cave tour, Joey and I decided to do a small hike around the collapsed crater. It was foggy and wet, but that didn’t dampen our spirits. We hiked a good two kilometers to a lookout point where we had a bird’s eye view of the crater and the Reka river flowing out from its underground passage.

What an impressive gem of a cave tucked away in Slovenia’s Karst region!

When in Slovenia Make Sure to Visit the Skocjanske James Caves

It only took a single tour for me to realize that Slovenia’s underworld is almost as impressive as what is found above the surface.

I was more than impressed by the Skocjanske James cave tour. The tour lasted over three hours, and our guide was an encyclopedia of knowledge just waiting to unleash herself on our minds. Because we visited this section of the country in the winter time, we could only explore part 1 (the shortest walking tour) of the caves. I was a little disappointed at first because in this section we wouldn’t see any bats, but that was short lived. By the end of the tour I was left awestruck, and I really didn’t feel like I needed to see any bats, the cave had more than swept me off my feet. 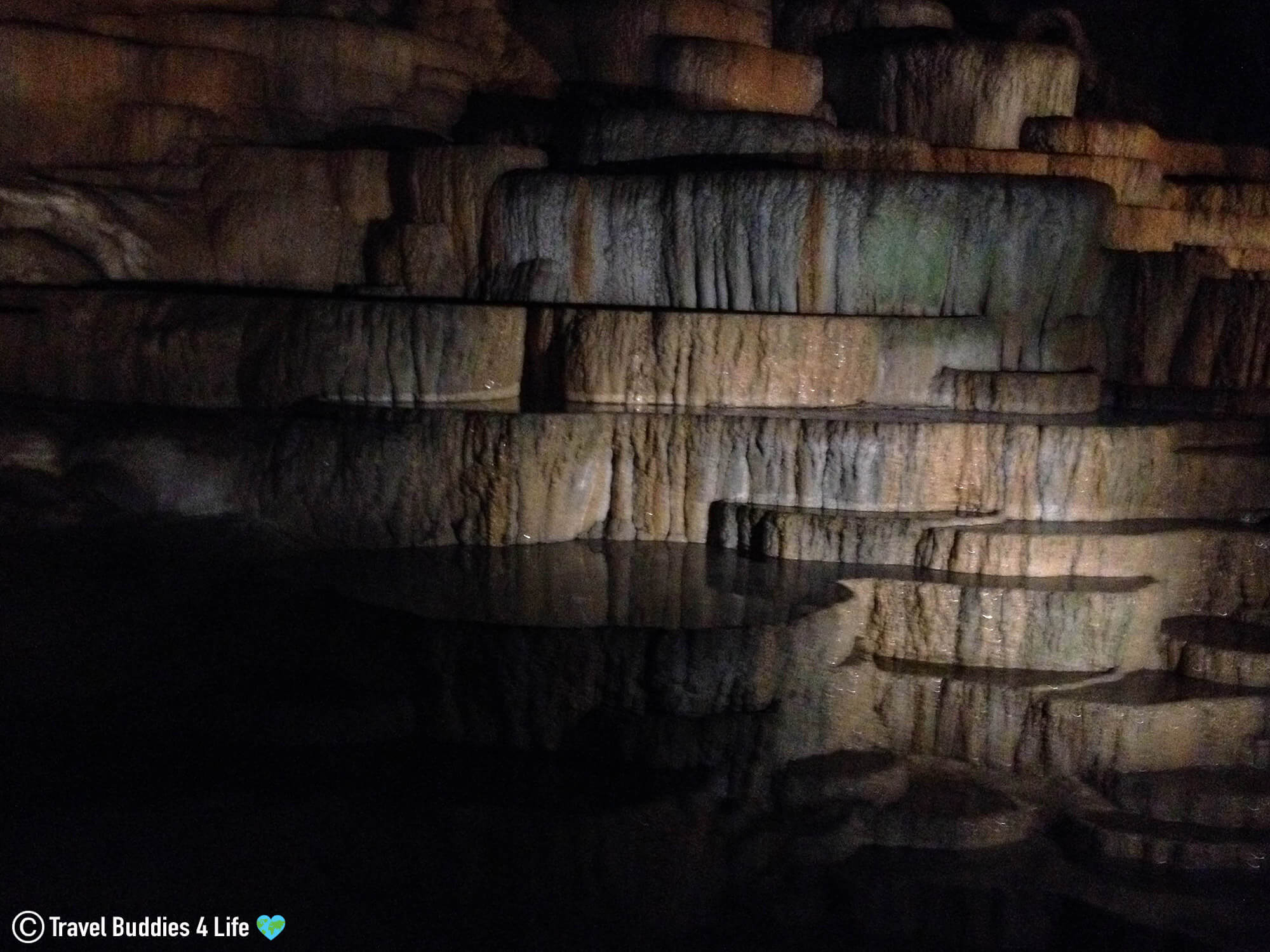 Have you ever been traveling in Slovenia? What was your favorite outdoor adventure to try?

Writers Note: A huge thank you to the Skocjanske Jame Park for the wonderful tour as well as for the map and photograph. While we were disappointed we couldn’t take our own pictures, we were thrilled to be able to use some of your images. 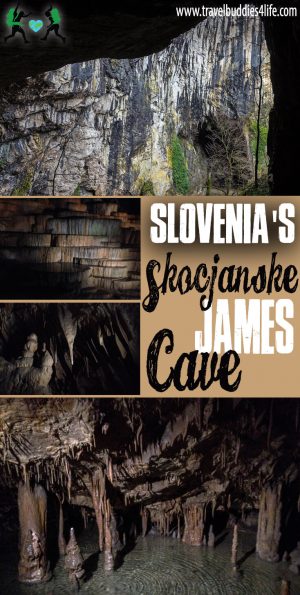