Mental instability is defined as being a behavioural or mental pattern that may cause suffering or the poor ability to function in life. What better way to ring in the New Year than to see how mentally unstable we really were.

My sister Nadine and I had been talking about doing a polar dip for a few years now. It’s one of those bucket list things that we have always wanted to do. For those of you who are unfamiliar with the polar dip, it is the act of submerging one’s self underwater during the height of winter purely for the you-only-live-once feeling. Every year, we snowmobile out into the middle of nowhere to spend New Years at a family cottage hidden deep in the forest of northern Ontario, talk about chopping a hole in the lake and then after all is said and done we end up being too preoccupied with our celebrations to actually follow through and make it happen. Well, that wasn’t the case this time…

We all woke up slightly hungover on New Year’s day. It had been a glorious night of food, fun and festivities. We had celebrated New Years not once but twice seeing as we weren’t ready at the stroke of midnight.

We headed down to the lake mid morning with an ax, pick ax and rake in hand. The time had come to make our polar dipping destiny a reality. So far winter had been pretty good to us. Christmas had been a white one and it had been cold enough for the past few weeks that a layer of ice had formed on the lake. Deciding to cut a large square in the ice close to the dock so that we could use the ladder to climb out, we plotted out our perimeter and began chopping away. It was wet, it was slushy and after an hour we had finally opened an area big enough for us to jump into. The only thing left to do was prepare for the ice bath to end all ice baths.

“I can’t believe this is finally happening,” was all that passed through my mind as we suited up in our bathing suits and gathered our towels. By this time the Harley clan, some close family friends, had arrived out at the cottage to spend New Year’s day with us and had been filled in on the day’s activities. It couldn’t have been more perfect; we now had two photographers, a GoPro videographers and a couple towel holder, we were set.

A Little Liquid Courage for the Road

A bottle of peppermint schnapps in hand, the time had come to make our way lakeside with our towels, bathing suits and big winter boots. It was windy and cold outside. The kind of cold that nipped at your skin and made you feel like you were being pinched. The closer I got to the lake the bigger the butterflies got in my stomach. We are actually doing this, we are actually doing this, my mind kept repeating like a broken record.

Bottoms up! Down goes the delicious peppermint shot as Nadine, Joey and I say our last Hail Mary’s before lining up along the edge of the ice. We had come to an agreement that I would be the first to jump, seen as I had pushed for this stupid idea in the first place, then Joey with Nadine bringing up the rear.

Camera’s rolling, photographers at the ready… 3, 2, 1, but when everyone hollered GO I couldn’t move. I was rooted to the spot unable to will myself to take the first leap and break the dark icy lake water in front of me. Both Joey and Nadine kept nudging and pushing me toward the hole, just go, do it, jump, all to no avail. Finally, Nadine grits her teeth and said: “Move out of the way, I can’t believe I’m doing this,” and without so much as a wink of hesitation cannon balls beneath the surface. Before I knew it Nadine was out of the water just as quickly as she had jumped in, grabbing a towel and running off the dock towards the camp. As she had been toweling off, Joey had made the jump. A bigger splash this time in and out just as quickly. In the span of less than two minutes my partners in crime had done their polar dip and now all heads turned to me. The best advice I can give anyone who is contemplating doing a polar dip is don’t think just do it. After the flurry of action that had just happened I didn’t have the time to think about how cold the water would be, what would happen if I couldn’t get out, would I be able to run all the way to the camp in my bare feet in the snow. I JUST JUMPED!

As if doing a polar dip once wasn’t good enough we decided to do it again the following day improving on our first attempt and making sure that the GoPro footage wouldn’t die halfway through this time.

Here are a couple of things we changed from the first polar dip to the second:

1. During our first polar dip attempt the three of us wore big snow boots down to the lake and ran back up in our bare feet. The second time we opted for crocs that could be worn going down and easily slipped back on for the race back up.

2. My sister and I sported socks on the first attempt so that we wouldn’t cut out feet walking on the ice or while climbing out. After having polar dipping once we quickly realized that socks don’t do anything except make a wimpy fashion statement and so we cut them out altogether.

3. Running 200 meters all the way up to camp was by far the worst part of the first polar dip. We could barely use our feet by the time we had arrived indoors. This time we would be traveling in style, with a couple of snowmobiles waiting for us to hop on and race up to the warmth of the cottage.

As successful as our first polar dip was, our second time was even more flawless. We got some great footage, had an easy time slipping on our crocs and enjoyed racing up the road to the cottage by snowmobile instead of on foot. Now that we are seasoned polar dipping veterans check out our list of important stuff to have when doing a polar dip.

Some people may wonder why would anyone in their right mind want to do a polar dip. The payoffs? Bragging rights obviously, the exhilarating feeling of having the guts to do something not everybody would do and hopefully a nice cup of hot chocolate and warm towel afterwards.

Having talked about polar dipping for years and wanting to do one since as far back as I can remember, Joey, Nadine and I are finally able to say we did it. An experience unlike any other, on January 1st 2017 we join an elite group of individuals when we fearlessly hopped below the surface of a frozen lake up in the middle-of-nowhere northern Ontario. 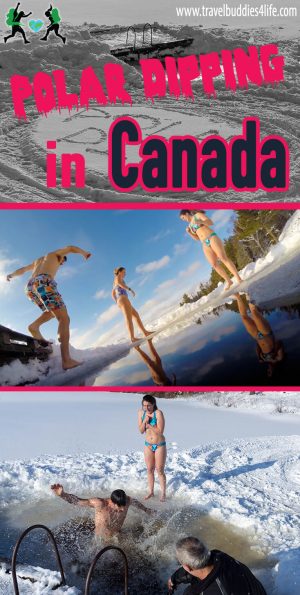