Waterfalls can be really distracting. We probably stopped about 10 times on our way out of Reykjavik to explore the cascading glacial water running from the Icelandic highlands towards the ocean. We spent so much time stopping for pictures, that we arrived to our accommodations for the evening late at night and had to set up our camping gear in the dark. 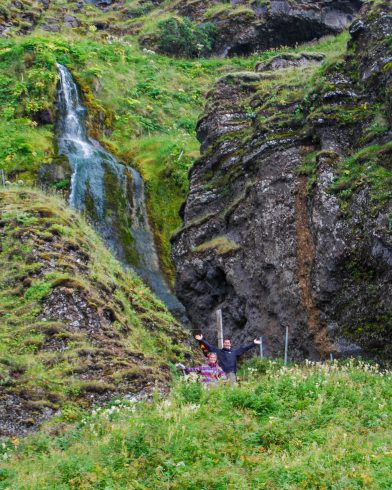 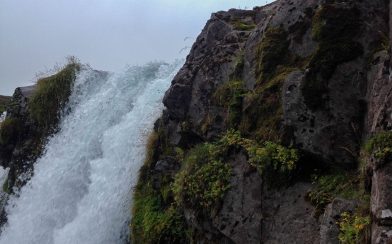 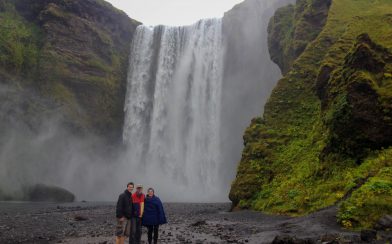 Iceland has waterfalls of all shapes and sizes. Small waterfalls are all over the landscape, trickling down the mountain in public viewing areas as well as in local backyards. The bigger and more beastly waterfalls are spectacular coming with extraordinary views and thick clouds of mist. One could travel to Iceland simply to look at waterfalls alone.

Here are some of the waterfalls we got to see during our visit:

The Seljalandsfoss is perhaps the most known and most photographed waterfall in all of Iceland. Found along the southern coast close to Þórsmörk Road 249, this waterfall shuttles runoff from the Eyjafjallajökull glacier over a 60 meter drop into the Seljalands river below. What makes this waterfall a hit with the tourists, is that visitors can not only appreciate its glory from the front, but they can also walk through a small cave behind it. Walking around in this area is truly an unquenchable adrenaline rush but can be a damp experience if you are not properly equipped. Thankfully we had our rain gear with us and the sheer power of the falls had us covered with mist in no time. 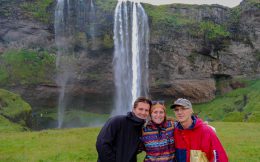 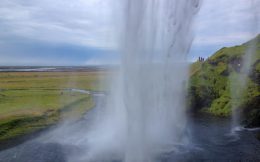 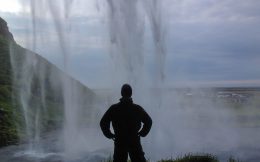 Not many tourist know, but just past the Seljalandsfoss is another breath taking waterfall called Gljúfrabúi. Camouflaged by the rugged landscape, this waterfall is literally 200 meters or a 5 minute walk on the footpath from the Seljalandsfoss. A small goat trail gives you a view of Gljúfrabúi from the top or you can make your way between the narrow rocks and get and see the view from of the base of the falls. You will definitely need a raincoat and boots if you’re hoping to get up close and personal with this hidden gem.

The 32 meter tiered cascade of the Gullfoss, is located 1.5 hours south-east of Reykjavik. Having the appearance of simply vanishing into the earth, the Gullfoss is fed by the Hvítá river which twists and turns southwards until plunges down a 3 steps staircase into the churning white water below. Called the Golden Falls, from the brown coloration glacial water typically has, on sunny days a rainbow can be seen shimmering over the mist of the falls. More than just a popular landmark, the Gullfoss is where Iceland‘s first environmentalist, Sigriður Tómasdóttir, vindicated for the importance of preserving nature, threatening to throw herself in the waterfall should the land turn into a power producing plant. 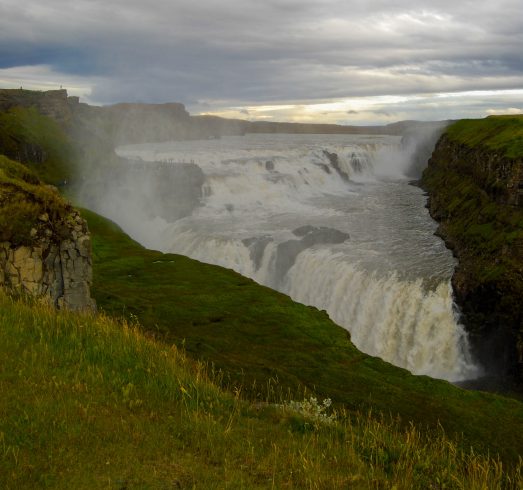 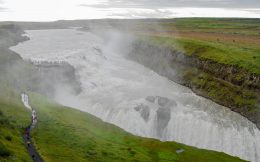 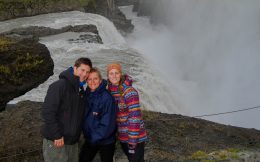 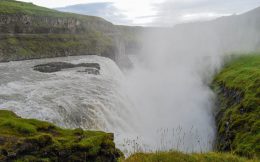 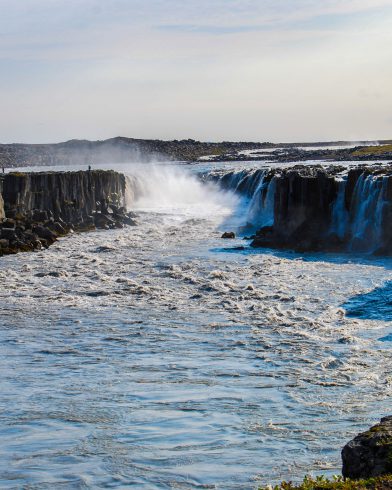 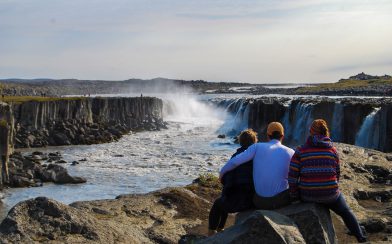 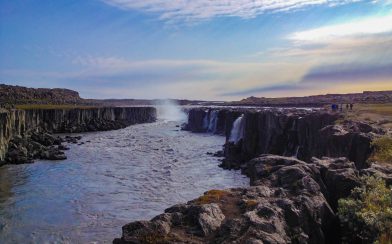 Found in Vatnajökull National Park, the Dettifoss is considered the most powerful waterfall in Europe, with a water volume discharge of 193m3/s. Located down river from the Selfoss and upriver from Hafragilsfoss waterfalls, the Dettifoss has a roaring drop of 44 meters into the Jökulsárgljúfur canyon. Collecting water in the northeast of Iceland, the Dettifoss waterfall is located close to Húsavík and Lake Mývatn. 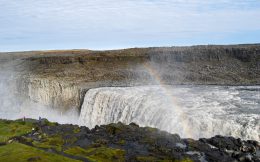 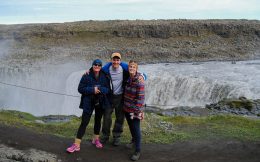 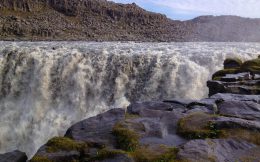 The Glymur is Iceland’s second highest waterfall having recently been surpassed by a newly measured waterfall near Morsárjökull in 2011. Nestled among some of Iceland‘s most beautiful fjords in the Botnsdalur valley, the Glymur falls from the Hvalvatn Lake, 198 meters down the Hvalfell mountain eventually making its way into the sea. A short hike to reach the base of this waterfall and marvel at it’s wonders, there is also a 7.5 kilometre hike will take you along the Botnsá river to some smaller waterfalls and lava caves. 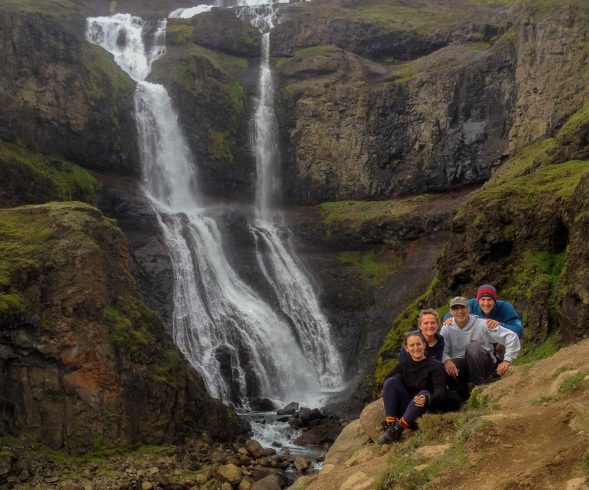 The Kirkjufellfoss waterfall may be only 5 meters tall but that doesn’t make it any less exquisite on the eyes. Situated on the north side of the Snæfellsnes Peninsula, this short waterfall’s name stands for “church mountain falls.” A big spot for photographers, the waterfall is right at the base of the Kirkjufell mountain, which from the right angle has the appearance of a witches hat. 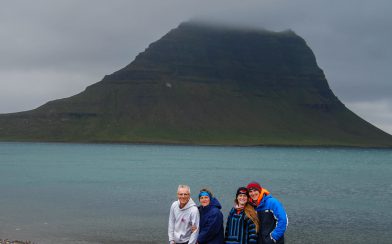 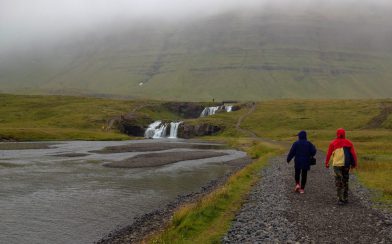 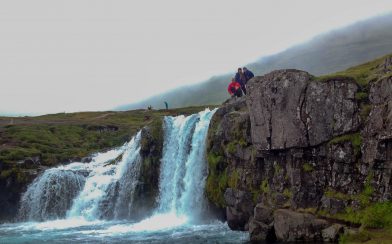 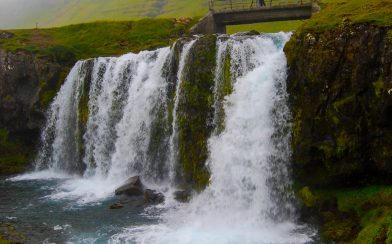 The Skógafoss waterfall is located in southern Iceland, separating the islands highlands from the coastal lowlands. A place of legends, the Skógafoss is rumoured to have hidden treasure behind it’s thundering wall of water, buried by the area’s first Viking settler, Þrasi Þórólfsson. The Skógafoss is a popular waterfall among tourists and has starred in movies such as Thor and the Secret life of Walter Mitty. Both a wide and lengthy waterfall measuring 25 meters across and 60 meters top to bottom, often times a single or double rainbow can be seen thanks to the spray produced by the falls. 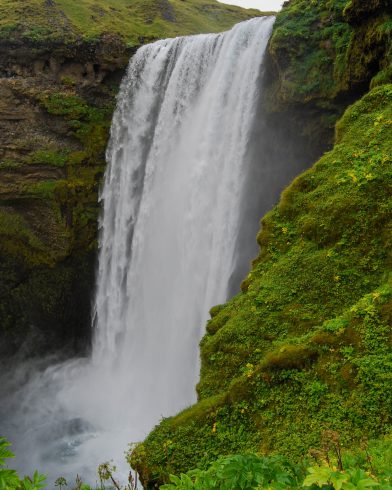 Of all the waterfalls that we had the chance to see my favourite was the Seljalandsfoss. The sheer size and magnificence of walking through the cave behind the falls will forever be etched into my brain. If you are planning on checking out the waterfalls of Iceland be warned, it’s a wet experience. Make sure to bring a raincoat, warm cloths and some good hiking boots to battle the elements.