Feeling the Heat in Masaya

A Masaya Volcano and Pottery Tour

Ever heard of the the city of Masaya and its surrounding volcano? Neither had I until I set foot in Nicaragua.

The city of Masaya is about 20 km south of Managua (the capital of Nicaragua). Masaya is Nicaragua’s third most populous city and gets its name from the active volcano that rests on its east geographic boundary.

The Masaya volcano is formed by the subduction of the Cocos tectonic plate with the Caribbean tectonic plate. A huge tourist attraction in this part of the country especially at night due to its exposed magma, Joey and I couldn’t miss a chance to see real lava in the flesh for the very first time.

In order to check out infamous Masaya volcano at night, Joey and I joined a day tour with a local Granada company. The day tour allowed us to overlook the Apoyo Laguna a lake filled volcanic crater, learn about pottery fabrication, visit the colourful Masaya markets and conclude at the volcano lava pits.

An Overview of Laguna Apoyo

The first stop on our agenda was the Laguna Apoyo. It was not our first visit to this dormant volcano turned lake. A few days prior to the tour, we had spent the day relaxing by the lake at the Monkey Hut and even took a dive in the volcanic crater. The pleasantly warm Apoyo lagoon, has waters that hover around 28°C giving bathers the feeling as if they are swimming in a natural bathtub. On the tour we didn’t stop for a swim, we stopped at the highest point enabling us to overview the calm lagoon water below. From the reserve lookout, we could see the pearly stillness of the lake dotted with kayakers, a picture perfect view. We walked along some of the dusty foot paths and took in the crater lake scenery before moving on to our next stop.

The Art of Pottery Making

In San Juan de Oriente, a small town just outside of Masaya, almost 90% of the villagers make a living from the art of spinning, crafting and painting ceramics. During the pottery tour, we visited a local shop where the owner showed us the pottery making process from the beginning to end. He was a wizard at manipulating and shaping the clay into a vase form and even gave me a shot at trying to spin my own pot. At first glance it looked easy watching him spin a vase in 2 minutes flat, but when it came my turn I had a hard time… Much harder. I was all smiles when I had finally managed to finish one pitiful palm size vase in triple the time.

Once the pottery spinners had created their the state of the art vases and figurines, they were left to dry for 24 to 48 hours. After extensive drying, the pottery was then to be painted, first with a primer and then coated with colors and carved to make masterpieces of all shapes and sizes. Looking through the rows upon rows of handcrafted ceramics, I can tell you that no two pieces of pottery were the same. The last step in the pottery making process was the glaze and final firing of the the pot in a stone oven. This step seals the decor and colour on the pottery making it durable and water safe.

It was interesting to learn about this historic Nicaraguan tradition that dates back 2500 years to the Spanish Conquest and once we’d check out the many street vendors with their own pottery creations for sale, we hopped back in the shuttle for our next destination.

Shopping at the Masaya Markets

It took a little strategic navigation to weave our way to the heart of Masaya, but in no time we were dropped off at the castle like entrance of the Masaya market place. Leather, spices, ceramics, hammocks and homemade trinkets, this place was the perfect spot to find that special souvenir to take home.

The Masaya market has seen everything over the years; from accidental fires to full fledged building renovations, there isn’t much this network of shops has not been through. A popular place for artisans and local craftsmen to display and sell their work, Nicaragua’s most famous market maintains the same role as it has over a century ago; to sell and trade.

Walking through the old brick arches that surround all the little shops that make up the Masaya market was like walking into a colourful fairytale. Every small store was equipped with more souvenirs than they could ever possibly hope to sell and store owners prowled outside their shop coaxing potential buyers to have a look at their merchandise. Joey and I roamed the market until it became dark, getting lost in the bright and bizarre artifacts. As night approached, we met our tour van at the medieval bricked entrance for the last stop of the day; the volcano.

Nighttime at the Masaya Volcano

We drove a mere 5 kilometers from the Masaya city center to arrive at Masaya Volcano National Park. I could tell we were getting close to an active volcano by the ash and haze that filled the air. A gray haze seemed to be everywhere and made me feel like I was seeing the world through a pair of slightly dirty glasses. The line up to visit the molten lava pit extended from the summit of the volcano down 2 kilometers of dirt road all the way to the highway exit ramp. Inch by inch our van made its way to the top with an average of thirty vehicles being allowed at the viewing point at one time for only 15 minutes. The first and largest nature reserve in Nicaragua, Masaya Volcano National Park is a volcano complex which includes 2 volcanoes, named Masaya and Nindiri, with a series of collapsed craters and cinder cones.

Donned the “Gates of Hell” by locals back in the 16th century, the Masaya volcano is a smoking mountain lined with jagged black rock and a fiery pit just waiting for the perfect time to erupt. It is not a question of if, it is a question of when. The large bubbling magma reservoir on the Masaya vents into the main crater called Santiago. This degassing pit is the one we had come to see.

Peaking over the edge you could feel the heat from the earth’s core radiating from the pit. To date we had climbed a few volcanos and checked out some venting sulfur fields, but this was our first real life glimpse of red hot lava. Even though it was a couple hundred meters away, Joey and I both could not get enough of watching this scorching liquid boil and splash against the volcanic walls.

Sometimes when the volcano is in a less active stage, visitors can hike around the volcano crater for a better view and even descend below and check out the hundreds of bats housed in the Tzinaconostoc Cave. Unfortunately leading up to our visit the volcano had been too active and visitors were limited seeing the lava from a designated area at 15 minute intervals due to the toxic sulfur dioxide gases.

We ended the tour on an adrenalin high, wound up and excited after feeling the Masaya heat. It had been a day of firsts; my first time trying to spin pottery, our first time seeing lava. Joey and I were very impressed with the 6 hour tour that cost us only $20 USD. Nicaragua is a country full of secrets, the city of Masaya being one of them. If you’re travelling to Nicaragua you must first consider making a pit stop in this region. An artistic hub and market city resting at the bottom of an active volcano, Masaya really is the place for any tourist to visit. 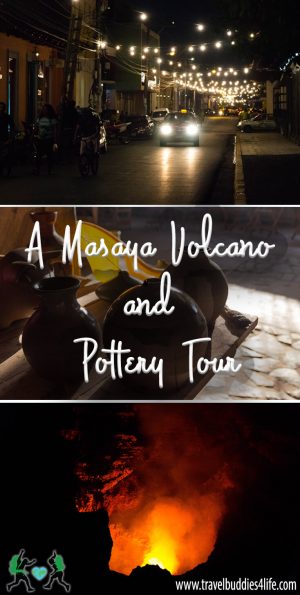