From Gouda with Love

When in the Netherlands, do as the Dutch do: eat lots of cheese. And where better to do this than in the city of Gouda!

The small city of Gouda is located in South Holland with a population of about 70,000 people. While it may be known for many things, Gouda is perhaps best known for the cheese it gets its name from. Funnily enough though, gouda cheese is, in fact, not made in the city at all, but rather in the surrounding regions.

When we arrived to the city in the late morning the first thing I saw was the cobblestone streets lined with tiny mom and pop shops. The city was brought to life by these local craftsman selling candles, smoking pipes, stroopwaffles and… you guessed it cheese of every flavour.

Wandering the back streets I saw cheese shop after cheese shop, their display windows stocked full of wax wheels making my mouth water. What I love most about the Dutch is that they always have cheese samples out for prospective buyers!!! Sufficient to say we entered a few of the shop, browsed around and tasted some of the cheese selections.

I tried herbed cheese, I tried spicy cheese, I tried pesto cheese, I even tried a purple block of cheese that was infused with lavender; how strange is that! I made 2 or 3 laps around the store sampling and resampling until I finally decided on a small block of dairy goodness to get. Take a look at some of the interesting cheeses we tried:

The Gouda Cheese Market we Missed

Joey’s aunt and I visited Gouda during the winter months. Unfortunately the well known cheese and craft market was closed down for the winter. If you are planning a trip to Gouda make sure to take into consideration this unique spring and summer market running from 10-1pm every Thursday from April to August. I’m told that it is an authentic experience worth witnessing. Just like in the olden days, dairy farmers and cheese traders come to the market and lobby for the best cheese prices sealing every deal with a traditional hand clapping.

The city of Gouda has seen everything over the years. From deadly plagues and fires to economic problems making it one of the poorest cities of the Netherlands in the 19th century. As tragic a past as Gouda had, you would never know it by touring the city nowadays. From what I could tell this happy cheese capital is a schoolyard of activity even in the bitter cold of winter.

If you are in the area make sure to stop in stroll the streets, take some pictures and most importantly taste lots of cheese! 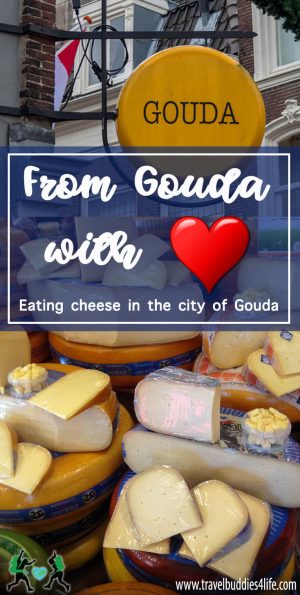