Getting Heat Exhaustion while Summiting a Volcano

Today was suppose to be simple, catch the chicken bus towards Rivas, get off the bus at Mombacho Volcano National Park and climb that bad boy to the summit. And that is how it went… well sort of.

The Mombacho Volcano, located about 10 kilometers outside of Granada, is what we would be climbing today. A 4,409 foot high basaltic stratovolcano with 4 large craters all covered in cloud forest, the name Mombacho means “Mother of our Land”. While not an extinct volcano Mombacho’s last eruption occurred in 1570, when the rock and lava spewed into Lake Nicaragua forming the Islets of Granada. 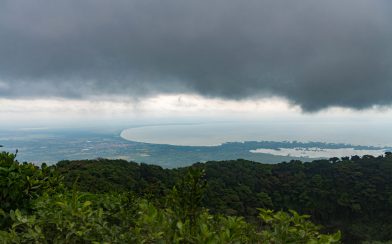 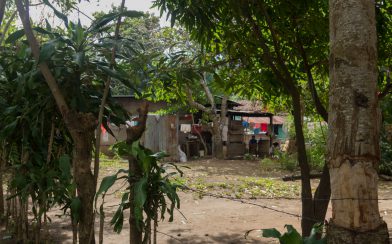 We started our day at 8AM which is a sleep in for many of the locals in this part of the world. Down here, with the heat of the day building as the sun creeps higher into the sky, most people like to greet the day at around 6AM. We made a quick breakfast and packed peanut butter and jelly sandwiches for lunch, grabbed our rain coats and lots of water and headed out the door not even a half an hour later.

Joey and I caught the chicken bus on the south-east side of Granada, past the hectic local markets. Chicken bus is a name given to the colourful Latin American public transportation buses, that everyone and their chickens use as a means of travel. When old school buses from North America are put into retirement, they are sent down to these countries and the old yellow school buses are painted and driven into disrepair. Sadly no one on our bus was transporting any live animals with them but we did have plenty of vendors walking up and down the aisles trying to sell merchandise. Having told the bus driver that we wanted to get off at the road leading to Mombacho Volcano National Park we didn’t need to worry too much about missing our stop. 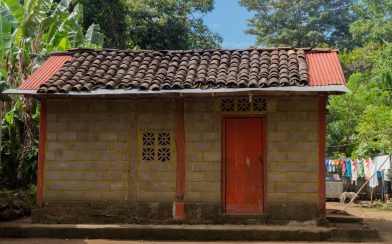 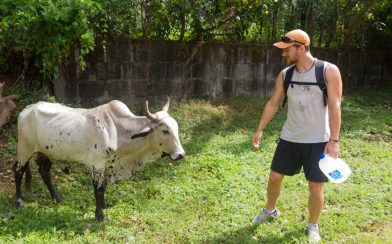 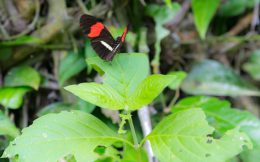 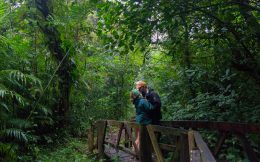 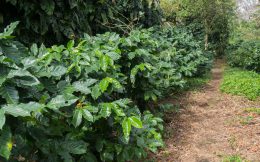 We got off at the bus stop and Joey changed from his flip flops to his hiking boot. About 10 different taxi drivers and tuk-tuks hackled us trying to get business and give us a ride to the top of the volcano. Once we had escaped their annoying clutches we followed the signs and entered the national park.

Our hike towards the volcano summit took us about 4 gruelling hours. The road uphill took us through towering coffee plantations, small villages, and cloud forests. Howler monkeys made their home in the trees above us and we stopped to call out to some along the way. It was amazing to hear how loud and ferocious they could sound if you got them riled up. 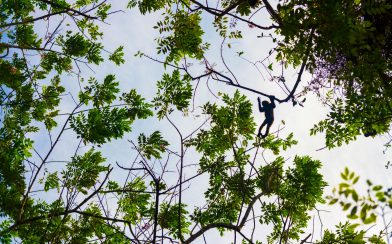 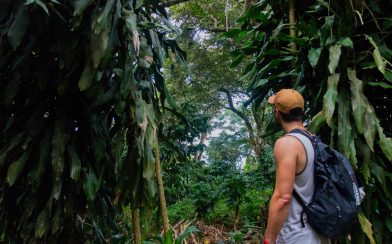 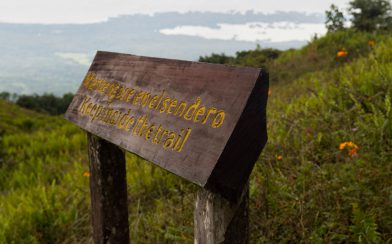 It was high noon when we reached the Mombacho Park visitor center. I wouldn’t say the center was at the summit (the reality is there are no trails that actually lead to the highest point of the volcano) but it was pretty darn close. A ranger greeted us while we were having lunch and gave us a little information about the area and the hiking trails to choose from. We decided to do the Crater Trail loop a 1.5 kilometer trail that would take us to a scenic overlook of the city of Granada and past fumaroles, volcanic openings from which sulphuric gases emerge. 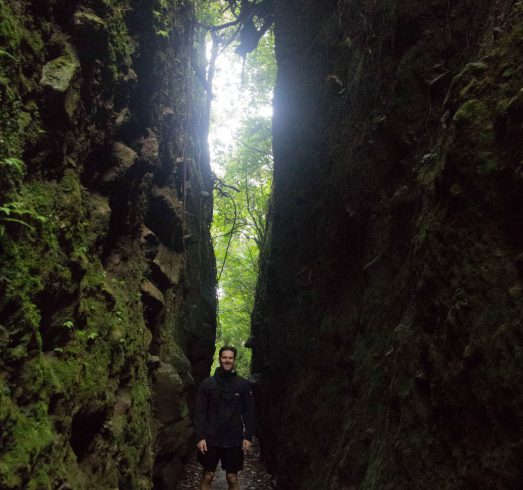 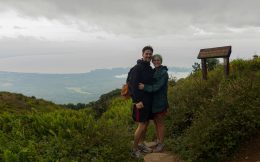 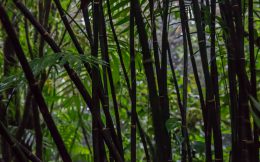 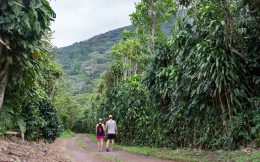 The weather was significantly different at the top of the Mombacho volcano than it had been below. The temperature had dropped quite a bit and it was much more humid. We were glad we had brought our rain coats as the hike took us 1.5 hours to complete and the wind made it a little chilly.

At 2PM it was time to start making our way back down Mombacho to the bus station. As hard as the way up the mountain was, that was nothing compared to how we felt going back down. By then we had been on our feet for 7 hours straight doing some pretty rigorous hiking. Our feet were screaming in pain and our legs wobbled with weakness as we baby stepped our way down the steep slippery incline. When we were about ¾ of the way down, a truck pulled up beside us. In flawless English the man driving offered us a ride to the base of the volcano. With two hitchhikers already in the truck bed, we took him up on his offer without hesitation. Not only were we lucky enough to score a ride to the bottom of the volcano but the man was also going into Granada and brought us all the way to town. 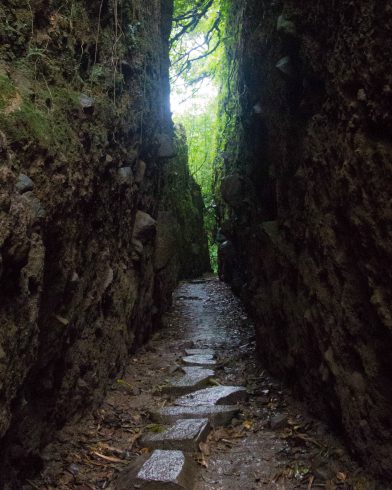 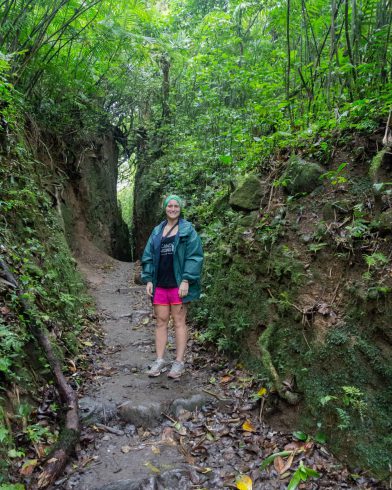 Joey and I were two sad sorry souls after our day on the mountain. Body aching and feet feeling like they were on fire we figured a good night’s rest was all we needed to rejuvenate our body, mind and souls. Unfortunately we hadn’t seen anything yet. 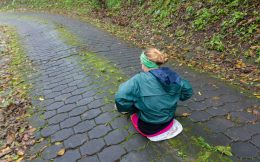 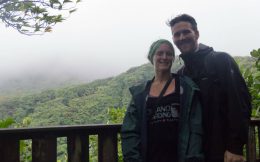 The true repercussions of the grueling hike came the following day. Personally I think we should have been a lot more scared than we were, but at the time we didn’t really know what was going on with our bodies. We both woke up that morning with fevers, nausea, headaches and severe muscle cramps. Ignoring our discomfort and trying to enjoy as much as we could in our dying days in Nicaragua we spent the day outside yet again, unknowingly making our symptoms progressively worse. Joey and I were pretty big train wrecks by early evening and were convinced that we had gotten food poisoning.

It was my nurse mom that came to our rescue and shed some light on our dizziness, muscle cramps, fever and nausea suggesting that we may have potentially given ourselves heat exhaustion. Sure enough, after cooling our bodies in a cold shower and consuming large amounts of water and gatorade our bodies slowly returned to normal.

After recovering from our unpleasant heat exhaustion experience Joey and I pondered how we could have missed putting 2 and 2 together. It had never even crossed our minds that we were suffering from a heat related illness. It got us wondering:

a) What is Heat Exhaustion?

Heat exhaustion is a heat related illness, often accompanied by dehydration, occurring when a person is exposed to high temperatures. It is not something to be taken lightly. If left untreated heat exhaustion can quickly escalate to heat stroke a condition that can lead to brain and organ damage and even cause death.

b) Signs and Symptoms of Heat Exhaustion:

c) How do you Treat for Heat Exhaustion?

The most efficient way to treat someone with heat exhaustion is to get then out of the heat and indoors. If getting indoors is not possible, finding a shaded and breezy area is the next best option. Hydration and bringing down the body’s core temperature is key for the individual suffering from heat exhaustion. Rehydrate with water and electrolyte filled sports drinks, while avoiding caffeine and alcoholic beverages. Immersing the victim in a cool shower, bath or sponge bath. If your victim does not feel relief from heat exhaustion within 1 hour seek medical attention. 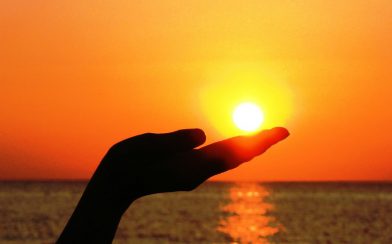 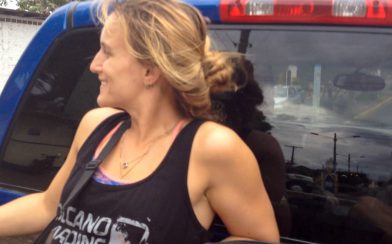 At some point in our lives we’ve all spend too much time in the sun. If we’ve learned anything from our Mombacho volcano hike it’s that it doesn’t need to be sunny for heat exhaustion to happen. A humidity of 60% or more is enough to hamper the body’s ability to cool itself through sweat evaporation. The humidity of climbing in the cloud forest is likely why we missed the signs of heat exhaustion.

In the summertime, fun in the sun is what all our bodies crave, but as we found out the hard way it is important to take precautions to avoid overheating and related illnesses. 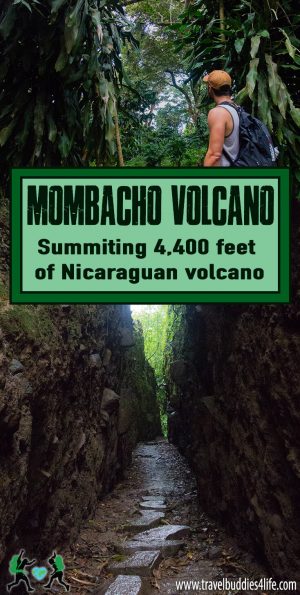