A Glimpse at the Sustainable Side of Iceland

Whether politicians and global leaders choose to admit it or not our planet is changing. Energy use, accounts for a significant amount of greenhouse gas emissions making their way into our atmosphere every day. In lieu of this global concern, the country of Iceland has been striving to do its part adopting a sustainable energy option and reducing its carbon footprint. Before I bore you with science let me inform you that Iceland is perhaps best known for its geothermal energy.

So what exactly is geothermal energy?

Four years in university and one minor in sustainability later and I have only grazed the surface of this topic.

The word geothermal comes from the Greek word geo meaning earth and therm meaning heat. Put together, geothermal is essentially heat that is generated and stored within the earth. Originating, from the beginnings of the planet, the idea behind geothermal energy, is that over the years radioactive materials decayed and condensed to form the earth’s core and geothermal energy is produced when that heat is transferred from the core to the surface of the earth. By tapping into hydrothermal convection systems this energy is captured where cool water seeps into the earth’s crust, heats up and rises to the surface as steam. Once at the surface the steam is easily harnessed by modern day machinery and used to drive steam turbines, that in turn fuel electric generators. Taking geothermal energy and converting it into usable energy, for heat and electricity, we have now created power that is affordable, renewable and environmentally sound.

Sounds easy right, so why isn’t everyone doing this?

This is where the tricky part comes in. In theory geothermal energy is everywhere, hidden in the core of the earth deep beneath our feet. In practice however, geothermal energy is only really accessible at seismically active “hot spots” such as tectonic plate boundaries. This is the main reason why not every country can access geothermal energy. Some countries aren’t situated near “hot spots,” where heat from the center of the earth comes close enough to the surface to enable cost effective drilling.

Iceland is perhaps one of the more volcanic region in the world. Straddling the Mid-Atlantic Ridge, where the North American and the European tectonic plates diverge about 2 centimeter per year, this country is a prime candidate for tapping into geothermal energy. At present, virtually every home in Iceland is heated with hot spring water from the volcano fields and geothermal power facilities produce 25% of the country’s total electricity. Though the hot spring water may be sustainable for the planet it is definitely not the most delicious water. You can literally smell the rotten egg sulfur in the water when you use a household faucet anywhere on the island. We brought lots of crystallized juice mixes to put in the water in an attempt to mask the awful taste.

We didn’t realize at the time but you can actually visit the Krafla power station and learn all about the geology, history and utilization of geothermal energy in Iceland. My engineer of a Dad would have really enjoyed touring this. For visitation hours and more information check out their website.

Everyone has a role to play in energy conservation. Because of its ideal location, Iceland meets the special conditions needed for geothermal energy production. By investing in geothermal energy, Icelandic residents are taking a big step in preserving the environment for their children and the generations to come. 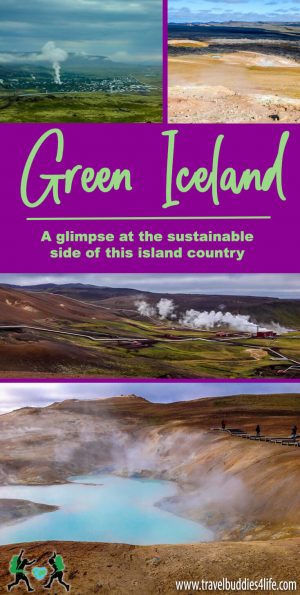