The Temple of Poseidon and its Archaeological Site

At the end of April we called in backup. My sister Nadine arrived guns blazing after a semester at school ready for a fun filled two weeks before starting her summer co-op.

I was beyond excited to see my sister after three months of being apart. We picked her up at the International Airport just outside of Athens and navigated back to our small town airbnb in the southern Attica region of Greece.

One nap and a couple hours of catching up later, we piled into our Honda mobile to make our way along Attica’s coastal road to Cape Sounion, at the southernmost tip of the Greek mainland. We were off to visit the famous temple of Poseidon, an architectural monument erected to honor the bad tempered Olympian and god of the sea.

As we drove the seaside winding road, the temple of Poseidon materialized in the distance, an archeological wonder at the cusp of the peninsula. The ancient greeks certainly knew how to pick a temple site. Staying true to his name, a weathered marble structure constructed at a cliff’s edge, rising up 200 feet and overlooking the blue waters of the Mediterranean.

The Temple Over the Years

According to archeological research the temple of Poseidon was built in the middle of the 5th century BC by an unknown architect. The site is said to be chosen because this was the first point that warriors and seafarers would pass on their journey home from exploration and war. Over the years this masterpiece has gone through reconstructions after being destroyed in the Greco-Persian War.

What can now be seen at the temple site is the remains of the rectangular building and 15 of the 34 columns still standing at 20 feet high. In order to preserve the fragile nature of the monument, security and barricades prevent visitors from entering the temple remains forcing tourists to appreciate the site from the outside. The five meter tall statue of Poseidon himself which used to stand at the heart of the temple, has now been moved to the Archaeological Museum of Athens for preservation.

Our Afternoon Chasing the Sunset

It took us about 30 minutes to get to the temple of Poseidon from our airbnb. When we arrived we wasted no time paying the 8€ entry fee (4€ if you are a student) and hiking up the dirt trails to the once glorified monument.

About 300 feet past the entrance gate we got our first peek at the remains of the temple of Poseidon. Towering above us the white marble of the monuments Doric columns stood etched in ancient graffiti. Oh what a sight it must have been back at the height of Greek antiquity, when men and women from all over would come and pay homage to the ruler of the sea. The wide open sea that surrounded the three sides of the temple seemed to carelessly stretch off into the horizon giving us a view fit for a king …or should I say a god.

All over the temple’s archeological site, dirt trails and information panels could be found giving tourists insight on life back when togas and mythological beasts ruled the country. We roamed and read the panels for a little while but it wasn’t long before we made our way down the steep cliff escarpment to the rocky waters edge for some real fun; a swim in Poseidon’s backyard.

It had only started to feel like summer in Greece the previous week, so the Mediterranean sea had not had a chance to warm up. Bitter cold and slightly uninviting we scouted out a prime spot to jump in. We were not the only souls out to brave the cold waters. As we contemplated our brain freeze a group of tattooed hippies had followed us down the escarpment and had stripped down to their underwear. Thank goodness we had been smart enough to pack our bathing suits, one of the scrawny hipsters had a ratty pair of boxer briefs so thin they would surely go see through the moment they got wet.

It took a good five minutes but we finally gritted our teeth and jumped in. Nadine even swam her way through a small cave we found in the rocks. It was a refreshing dip in Poseidon’s domain and we were pretty proud of our first swim of the summer. As we were drying off we found a huge gash on Nadine’s leg from her cave swim through. She had left a pretty big trail of blood from the water’s edge that didn’t seem to be letting up. Poseidon had demanded a blood sacrifice!

As the afternoon progressed to evening we slowly made our way back up to the temple, the highest point in the vicinity, for the sunset. Talk about relaxing, the rhythmic percussion of waves breaking on the shoreline was unforgettable and our faces glowed with the sun’s last rays. Behind the temple the sky was dyed pomegranate pink which faded to mauve as the sun melted away. Now I completely understood why our airbnb host had recommended visiting the temple of Poseidon in the late afternoon. What a great end to a first day with Nadine.

Is it Worth the Visit?

Located 60 kilometers south of Athens, the temple of Poseidon may be a tad out of the way for most tourists, but fortunately for us we had the means to get there. Though it doesn’t rank as beautiful as the monuments which make up the Acropolis, nor is it one of the most intact Greek temples, the beauty and the beaches in the vicinity make visiting Poseidon a worthwhile trip, especially for families looking to let their kids run free on the trails and play in the water. We had a beautiful afternoon swimming despite the cold, walking the trails and catching an unspoiled sunset over the Mediterranean. 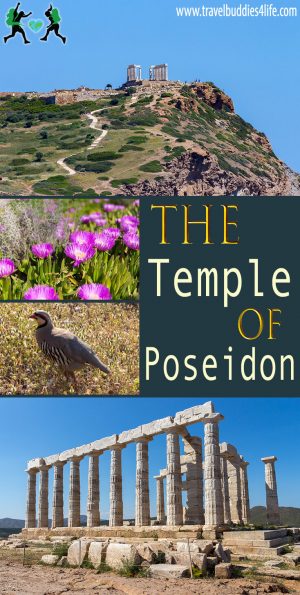