An All Inclusive Booze Cruise

Your first kiss, your first dog, your first time scuba diving… You never forget your firsts. For me this was my first time sailing and I couldn’t think of a more picture perfect place than in Santorini.

The beauty of the Greek island of Santorini is a head turner for any tourist. Its stark white buildings frosted with blue roofs are easily recognizable around the world. Sheer volcanic escarpments surrounded by the stunning Aegean Sea make it the top of anyone’s destination list.

Nadine, Joey and I had arrived on the island less than 24 hours ago with one thing in mind; some serious fun in the sun. We wasted no time scouting out the must-do’s and booking ourselves on an all inclusive catamaran booze cruise. Spiridakos Sailing Cruises was the company we decided to go with as they offered us a very competitive deal for 5 hours of unlimited beer and wine, a full BBQ onboard meal, towel and snorkeling equipment as well as transfers to and from our hotel.

Our boat was called the “Captain Leo” manned by a crew of four. The morning was perfect for a day on the water, we were picked up from our hotel by a shuttle and boarded Leo at 10 AM sharp. The booze cruise was in full effect the moment we stepped on and the staff poured us drinks before we had even left the harbour… It’s 5 o’clock somewhere right?!

Our boat had about 12 people aboard, a perfect number for meeting new faces and mingling. We met some rowdy ladies from Minnesota, a hip couple from the UK and nos amis françophones de Paris.

The Captain Leo sliced through the blue waters of the Aegean Sea as we distanced ourselves from the harbour. We passed rocky coastline, black sand beaches, red sand beaches and finally we made our way to the only white sand beach on Santorini, accessible only by water. The crew dropped anchor close to the eroded limestone beach allowing us to jump in and investigate the waters below. We donned masks and snorkels and leapt off the side of the boat into the chilly 12°C water. Small chunks of bread were tossed in the water enticing the little fishies that were at the bottom to come closer for a bite. Given the temperature of the water we lasted no more than 30 minutes snorkeling around. Bundled in our towels and drinking another round of beers to keep our booze jackets on the sailboat hauled in anchor and made waves towards the next stop.

The so Called “Hot Springs”

We rounded the tip of Santorini’s crescent shaped island around noon. In the distance we could see Santorini’s satellite islands; Thirasia, Aspronisi, Palea Kameni and Nea Kameni, the blown out pit of the once proud Thera volcano. The captain wasted no time in directing the ship’s bow towards the Thera pit, better known as caldera, where we would get to warm our bodies in some hot springs.

It was very easy to see where the entrance to the hot springs were. Several boats were anchored in the bay and tourists were swimming to and from the narrow inlet which lead to the geothermally heated water. The brave souls on our boat that could handle dousing their bodies in the cold water once again jumped in the stirred up and silty water.

When someone tells me hot springs – I immediately think of hot tub temperature water and I know I’m not the only one. I think everyone that had jumped from the boat had expected something decently warm that would wipe the chill from their bodies and rejuvenate them for the BBQ and trip back to port. Let’s just say that we were all very disappointed when we got to the end of the inlet and the most we could find was on teeny tiny corner of lukewarm water. It saddens me to say but my pee warms the water more than this sorry excuse for a hot spring.

Like a bunch of shipwrecked castaways we huddled together trying to contain the pitiful amounts of heat as best we could. Shivering with cold but unable to convince ourselves to make the long swim back to the boat we watched the many nimble billy goats scour the cliffs above us. Finally the crew signaled us back, and we had no choice but to swim back through the exceedingly cold water to our waiting boat.

While we had been freezing our butts off in the so called “hot springs” the crew on the boat had been slowly preparing for our BBQ feast! We sailed away from the business of the hot springs to a more secluded beach area where we would stop for lunchtime. “So when are we going to the hot springs?!” My goofball sister would ask every time we stopped at a new destination. This was the joke of the boat following our hot spring disappointment and even the crew had a chuckle at our good humour. When our feast was prepared we gathered around tables filled with delicious looking local food. The Greeks sure know how to eat! There was chicken, seafood, spaghetti and salads galore. Our famished group devoured the meal like hungry soldiers.

Nadine, Joey and I enjoyed basking in the lap of luxury, beer in one hand and cameras in the other on our way back to port. We relaxed in hammock like netting at the bow, we sat alongside the captain with the breeze flowing through our hair, we enjoyed the funky shaped rock formations that made up Santorini’s island coastline. As we neared the harbour a hilarious dance off kicked in with one of the other passing sailboats. Blasting music and perverted dance moves, our gang pulled out every trick in the books and we won the dance off hands down.

We had a rocking time on our five hour booze cruise. It was my first time sailing and I loved every second of it. There was plenty of sad faces when we pulled into the harbour. Slightly intoxicated and ready for a night on the town we boarded the shuttle for a short ride back to our hotel, guided by the one and only Nadine Perron.

It was a fantastic start to our four day island adventure; you’re doing us proud so far Santorini! 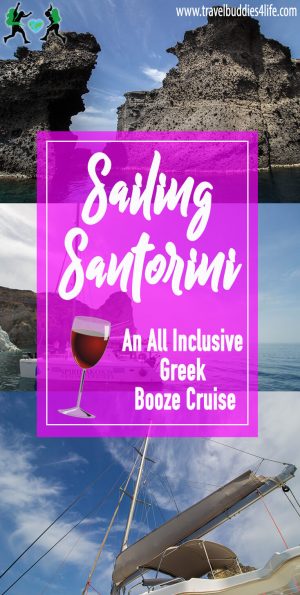