Today was a memorable day. Today we got our first glimpse at glaciers and icebergs!

Rewind to yesterday afternoon, on our way out of the capital Reykjavik. We had picked up our hippy mobile, demystified Iceland’s grocery stores and finally made it to route 1, the national ring road that encircles the country. There was nothing standing in our way from exploring the land of fire and ice.

Fast forward 24 hours and 320 kilometers later. We awoke in Skaftafell National Park to a crisp morning of fresh mountain air. Yesterday we had spent so much time checking out waterfalls that we had reached the campground in the inky blackness of the night and had to set up camp by headlight. You can imagine our surprise and delight when we woke up at the foot of a snow capped mountain which apparently we missed as we drove to the park. Things look so much different during the day. By lunchtime we were back on the road after a short but sweet morning hike. Our next pit stop; Jökulsárlón, one of Iceland’s greatest natural wonders.

Every spot in Iceland has a story and Jökulsárlón is no different. 370 kilometers east of Reykjavik, resting on the edge of Vatnajökull National Park, is Jökulsárlón, a glacial lake boasting 1000 year old ice, jagged domes and clear frigid waters spilling from an isolated inlet into the Atlantic ocean. Fed from the melting Breiðamerkurjökull glacier, an outlet of the Vatnajökull glacier, the calving chunks of ice break off of the Breiðamerkurjökull, fall into the lagoon and move towards the river mouth eventually making their way out into the ocean.

The lagoon many not be wide, but it is 250 meters deep, making it the deepest lake in the country. As if that wasn’t enough to put Jökulsárlón on the map, the lake is also famous for appearing in 4 Hollywood movies including; Batman Begins, Lara Croft: Tomb Raider and 2 James Bond movies.

Jökulsárlón’s icebergs colors range from milky white to bright blue depending on the air trapped inside and the reflection of the light on the ice crystals which make up it’s frozen structures. While walking along the black sand beach it is not uncommon to see playful seal heads popping up and down in the crystal clear water as they scour the lagoon for fish, nor is it uncommon to have icebergs washed up on the beach.

Though we didn’t try any of the tours, there are 2 types of boat tours that are offered at Jökulsárlón; the amphibian or the zodiac. While both boat tours offer 30-40 minute rides every half hour during peak tourist season (June, July and August), the zodiac tour is more expensive however it allows you to cover a bigger span of the lagoon and get much closer to the icebergs than on the amphibian.

It was our first time seeing icebergs in real life and I must say, I was totally blown away. The sights, the smells, the first time feeling will forever be etched in my memory.

Just like all natural attractions in Iceland, seeing this surreal place from land is completely free of charge and is well worth spending a few hours hiking the shoreline, admiring the beauty and maybe even grabbing a few ice blocks for your cooler if you need to keep things cold. 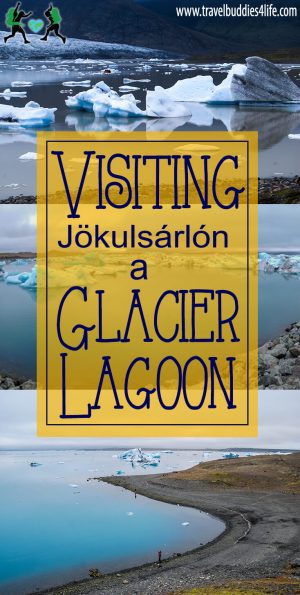