Joey is afraid of snakes, so naturally he would be the one that has the first encounter on our travels. Costa Rica has over 120 species of snakes 22 of which are poisonous. Online they say that your chances of encountering a snake in the wild is minimal and even less so for poisonous snakes. I guess chance was not on our side.

It was early evening and we were walking home to our accommodations just outside of town. At the equator the sun sets pretty quickly. Dusk turned to dark in as little as 10 minutes. By the time Joey and I arrived to our street it was nighttime. We had not even walked for five minutes on the sidewalk when I saw a snake go flying through the air and onto the road. The scaly creature had slithered out of the brush onto Joey’s foot and reflex had caused him to kick it off, a little harder then he wanted to.

Maybe it was because I had just been reading up on snakes and they said the first thing to do after being bitten is catch it or kill it for identification purposes (apparently you need to know what species you are bit by so you can inject the proper antivenom or the treatment could be lethal). Or maybe it was because I love looking at reptiles. Regardless, my first instinct was to chase after and investigate the snake. Black bands, red bands and yellow bands, as the snake slithered under the street light. My mind instantly knew the two species it could potentially be.

Mimicry is a trait that arises when a plant or animal imitates another organism to gain a survival advantage. This evolutionary trait can take the form of a behavior, scent, appearance or sound that a harmless species adapts in order to trick predators and competitors. One of the best examples of visual mimicry is its occurrence in snakes.

Coral snakes, milk snakes, scarlet snakes and king snakes are four very similar looking reptiles. The biggest differences between the four, one of them can kill you. These flashy colored red, black and yellow banded snakes are a perfect example of evolutionary biology. King, milk and scarlet snakes are all nonvenomous snakes that apart from their tri coloration and similar appearance to coral snakes are not otherwise dangerous to humans. What’s interesting is that most of these species are born mono- or bicolored and only develop their tricolor pigmentation later on in life. For example King snakes are born red and black, and only in areas where the coral snake is present do they develop a yellow pigmentation pattern.

There are many different varieties of coral snakes world wide. One thing they all have in common is their potent neurotoxic venom, that can take up to twelve hours to take effect and if left untreated can be fatal to humans. Coral snakes have small and inefficient fangs for venom delivery and hence most bites are considered “dry bites” (they do not actually inject venom into your system). Because these snakes are elusive and like to live in sparsely populated regions, very few bite fatalities are recorded on a yearly basis. Production of antivenom in the United-States has actually ceased because bites are so uncommon that making the antivenom is considered non-profitable for the government. It’s scary to think that soon there will be a coral snake antivenom shortage.

Coral snakes, Milk snakes, King snakes and Scarlet snakes though similar in appearance are quite easy to distinguish if you know what to look for. An easy rhyme to help you remember which one is safe and which one is dangerous is: when red touches yellow it kills a fellow, when red touches black it’s a friend of Jack’s. This rhyme refers to the red, black and yellow color pattern arising on the snakes bodies.

A comprehensive list all of the venomous snakes in Costa Rica:

Eyelash Palm Pit Viper (Bothriechis schlegelii): Don’t be fooled by their beautiful array of colors. From yellow and red to bright green, the eyelash pit viper gets its name from superciliary scales above their eyes. These eyelashes are thought to aid in the snake’s camouflage, breaking up their profile among the jungle vegetation where it hides.

Hognose Pit Viper (Porthidium nasutum): The name Hognose Pit Viper is named after its upturned snout which varies from being slightly to strongly upturned. Having a very monotoned color pattern of browns and grays, these pit viper snakes are relatively small in size.

Bothrops Asper Pit Viper (Bothrops asper): Also known as the fer-de-lance pit viper, this snake is an aggressive species responsible for the most human deaths related to the snake bites than any other species in the world. Sometimes called “the ultimate pit viper,” the Bothrops Aspers speed and proximity to humans is likely one of the main reasons why it has such a notorious streak with human envenomation.

False Fer-de-Lance (Xenodon rabdocephalus): Though this snake may look very similar to its counterpart the Bothrops Asper Pit Viper, its venom is significantly less dangerous. With a classification of being non-lethal lets hope if you ever come across a snake in Costa Rica it’s this guy and not its twin the fer-de-lance.

Striped Palm Pit Viper (Bothriechis lateralis): This pit viper comes in all hues of green with shockingly yellow eyes. Hiding out coiled in the greenery of trees this species prefers to avoid detection by staying camouflaged. The striped palm pit viper’s diet consists of birds, rodents, lizards and frogs.

Jumping Pit Viper (Atropoides nummifer, Atropoides picadoi): This short and stout viper gets its name from its supposed ability to leap at an attacker, some research however has proven this to be an exaggeration. Though the venom of this species is not fatal it can cause transient pain and mild swelling.

Godman’s Montane Pit Viper (Cerrophidion godmani): Ranging in the highlands of Mexico to Guatemala this snakes not only eats mice, lizards, frogs and birds, but also keeps a balanced diet by feasting on arachnids as well.

Sea Snakes (Hydrophis platurus): These snakes are found in tropical waters worldwide. Adapted for life in the water sea snakes have a flattened tail that allows for paddle like swimming and can filter 33% of its oxygen requirement through its skin.

The Bushmaster (Lachesis melanocephala, Lachesis stenophrys): Growing over four meters long, the bushmaster is the largest viper species in the world. Some researchers suggest that this snake produces a large amount of venom that is weak compared to other species in the pit viper family however the venom is delivered through huge fangs that can sometimes exceed 1 inch in length.

Mussurana (Clelia clelia, Clelia equatoriana): The mussurana is the snake hunter. Being immune to most snake venom, its favourite foods include pit vipers. This species of snake produces a small amount of venom that is not harmful to humans, however it prefers to kill its prey by constriction.

Vine Snake (Oxybelis aeneus, Oxybelis fulgidus): These snakes are a species of long slender arboreal critter that uses it’s tail to hold onto tree branches while catching its food. Vine snakes have a mild venom, non-fatal to humans, that is primarily used for capture and immobilization of prey.

Neotropical Rattlesnake (Crotalus durissus): Rattlesnakes get their name from the infamous rattle on the end of their tail. This species prefers dry, savanna like zones and has two distinct stripes starting at the base of the head. The Neotropical Rattler is the only rattlesnake specie found in Costa Rica.

Coral Snakes (Micrurus alleni, Micrurus nigrocinctus, Micrurus multifasciatus, Micrurus clarki, Micrurus mosquitensis, Micrurus mipartitus): With a small head and blunt tails the coral snake is shy by nature but extremely poisonous. A combination of red, black and yellow in coloration warn predators to stay away from this snake. When envenoming occurs, the longer these snakes keep their fangs in their prey the more poison is administered.

Remember snakes never purposely want to interact with humans, often times it is simply a case of wrong place at the wrong time. It is their natural instinct when threatened to defend themselves. They are probably just as scared of you as you are to them.

A few easy ways to avoid any unpleasant snake encounters:

1. Shuffle your feet on the ground when walking through dense foliage
2. Avoid high grass and marshy areas
3. Avoid walking at dusk and at night when snakes are most active
4. Wear high boots or jeans to cover the leg and ankle area, over 90% of all snake bites occur in this area

Stay safe and don’t taunt the slithering critters especially when in an unfamiliar country. 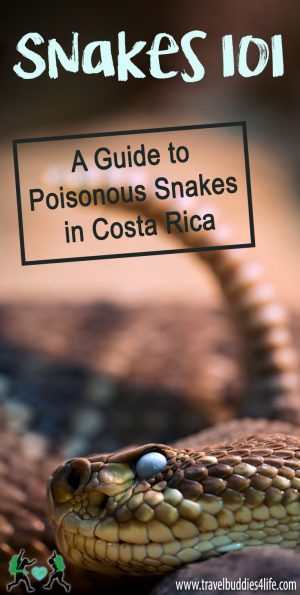