The Rainforest Bugs and Beasts

Some Cool Critters in the Cloud Forests of Monteverde

Bugs and little critters are fascinating to watch up close. A caterpillar morphing into a beautiful butterfly, a frog with enough poison on its body to kill 10 to 20 humans. So small and seemingly meaningless in such a big hub of a planet, they play an important role in the health and well being of our planet.

While touring Costa Rica with Mom and Dad, Joey and I visited almost every micro habitat imaginable; tropical rain forests, tropical dry forests, arid desert area, beaches, reefs, volcanoes. In the cloud forests of Monteverde, I had the opportunity to see some of these fascinating creatures that I had never seen before, in the wild, up close and personal.

What are cloud forests?

Cloud forests are unique habitats that are characterized by their high altitude, high humidity, cooler temperature (relative to rainforests) and abundance of mosses and ground vegetation. Having a wide distribution all over the planet, these habitats are fragile environments where climate change will certainly endanger these ecosystems. The Monteverde cloud forest is located at 4,600 feet and straddles the Tilarán Mountain range. As you climb the mountains, the warm trade winds that flow into the country from the northeast, cool and condense forming humidity and precipitation. This climatic phenomenon results in the haze and fog which give the cloud forests their renown name. Misty, humid and windy, the average yearly temperature in Monteverde hovers around 18°C, a somewhat chilling temperature once you have acclimatized to the 30°C weather in the valley.

Monteverde is found close to the town of Santa Helena, has no town center, is made up of mostly dirt roads and has 5,000 hectares of protected cloud forest reserve. Open year round from 7 AM to 4 PM, the Monteverde tourist trails extend into the protected cloud forest for up to 13 kilometers with 6 main trails that are well kept and easy to access. We spent 2 days hiking the cloud forests of Monteverde. We did a day hike, a guided night hike and a morning hike. Of the 3 hikes that we did, our most successful one was the morning hike. Given that we were the only ones staying in the lodge at the reserve, we made sure to hit the trails as soon as the facilities opened at 7 AM sharp. Being the first on the trails we saw a few interesting bugs but the highlight was the Agouti and the White Nosed Coati we saw.

Take a Look at the Creatures we Found in the Cloud Forests Around Costa Rica:

The mammal class include some of the largest animals on the planet with body types adapted to swim, climb, fly and live underground. Characterized by their hair, middle ear bone and mammary glands giving them the ability to feed their young milk, the largest orders of mammals include rodents, bats and soricomorpha.

An order of insects derived from ancient Greek meaning “scaly” and “wings” this group is the most widespread and easily recognized insect order in the world. Among the most successful group of insects encompassing butterflies and moths, Lepidoptera are found on all continents except Antarctica.

Probably one of the most feared order of insects, the 8 legged arachnids are a group of joint legged invertebrates that include your spiders, scorpions, ticks and mites. Though most arachnids are predators, they cannot consume solids and must therefore inject a digestive liquid into their prey turning it into a smoothie before consuming it.

An order of frogs, toads, salamanders and caecilians (limbless serpentine animals predominantly living underground), the name amphibian roughly means “both kinds of life,” referring to the orders ability to live on both land and in the water. Dating as far back as the Devonian period, amphibians use their skin as a respiratory surface with some smaller species almost entirely lacking lungs.

Originating an estimated 310–320 million years ago, cold blooded order of reptiles includes; turtles, lizards, snakes, tuatara (lizard like reptiles native to New Zealand), crocodiles and amphisbaenia (worm looking lizards). Although most reptiles have well adapted day vision that is better than most mammals, some species of snake also have an extra set of heat sensing visual organs that enable nocturnal hunting.

The closest relatives we have to the dinosaurs, birds are part of the group Avifauna which are defined by the presence of feathers, toothless beaks and ability to lay hard shelled eggs. From the teeny, tiny Helena hummingbird measuring 2 inches to the gargantuan 9 foot flightless ostrich, birds can be found on every single continent of the planet.

While some people go to the cloud forest to be immersed in nature, others go for the attractions. Serpentariums, insect museums and butterfly gardens, the area around Monteverde has countless options for capturing your imagination. This slowly disappearing green jewel of Costa Rica was made into a private nature reserve in 1972 by scientist George Powell and Quaker Wilford Guindon. Home to 3,021 known species of flora and fauna, this amazing place hold 2.5% of the world wide biodiversity and donates 100% of the entrance income to education, preservation and research.

What exactly is biodiversity?

Biodiversity is a very broad term that refers to the species richness and variability. The foundation upon which species, communities and ecosystems depend, biodiversity is crucial in preventing extinctions. Scientists estimate that there are between 3 to 30 million different species on the planet and that we have only identified 1.7 million of them. Studied on many different levels, nothing is more complex or dynamic than the variety of organisms that occupy our planet.

Where are the biggest biodiversity spots?

Even though across the globe, species richness tends to be higher in the tropics and lower in the polar regions, biodiversity is not evenly distributed. Things like; temperature, climate, geography, soil, presence of other animals, all play a key part in determining species hotspots. The Monteverde cloud forest reserve in Costa Rica is one such place.

How does biodiversity affect me?

If you think about it, biodiversity is what links everything on earth. The web of life is a complex network of relationships in which balance is what makes the world go around.

What happens to, for example, the chain links on a suspension bridge when they are removed? For the first little while it is very likely that nothing happens but that won’t last forever. Inevitably if we keep getting rid of the link holding the bridge together it is going to collapse.

Medicine, food, disease control, pollination… We all use biodiversity whether we realize it or not.

That endangered bat population that is currently having their habitat deforested; they are the last link standing between controlling the mosquito population and a large pandemic West Nile outbreak. Anyone who has ever gotten an injection in their lives, can thank the blue blood of the overexploited and endangered horseshoe crabs that protects from bacterial infections.

Just like before the collapse of a bridge, we are removing all the little pieces keeping our ecosystem together and one day it will collapse. No one knows when it is going happen, just that, given enough time it will. The question we need to ask ourselves when thinking of biodiversity; when will we stop taking away the links of our suspension bridge of life?

Scared yet? You should be.

Waste detoxification and decomposition, purification of air and water, nutrient cycling and aiding in soil fertility, the list of goods and services provided by the biodiversity of our planet is something that we have taken for granted. In the past, the well being of the planet is strongly linked with the health and prosperity of its inhabiting species. So if you think that losing biodiversity is no big deal, think again. The impending loss of biodiversity will inevitably take its toll on everyone.

What can I do?

1. Become a Knowledgeable Consumer: Avoiding products with palm oil, purchasing sustainable seafood, avoiding souvenirs made from endangered species. By understanding where everyday items come from and making an informed decision you are taking the small but necessary steps towards a better tomorrow.

2. Reduce, Reuse and Recycle: Cutting back on the amount of waste produced by sticking to the three R’s are simply yet effective first steps that don’t take long to incorporate into your daily routine. Small things like turning off the lights when you leave a room, biking to work instead of driving, fixing those ripped jeans instead of buying new ones, are all ways to help our planet.

3. Volunteer: Actions are louder than words and nothing speaks more than getting involved in a local organization, shelter or team to help raise public awareness. Education is the best way to spread the word and help shift people towards a large scale environmental movement.

Our planet is simply amazing. A network of relationships all interconnected through the chain of life, we live in a place that is one big hub of activity. From the bottom of the ocean to the the leafy greenery of Monteverde, let these amazing places inspire you to help join the fragile battle between nature and industry. 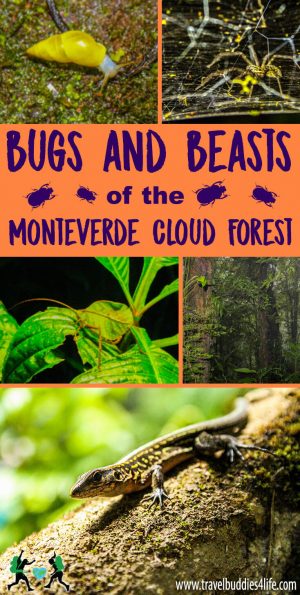