The drive from the Monteverde cloud forest to La Fortuna was pretty uneventful and for that we were grateful. So far horrendous roads, poor signage and barren unpopulated landscapes had become the norm for us driving in Costa Rica. It was bad enough that, at times, I even wondered if we would make it to our destination.

Fate smiled upon us on our way to La Fortuna when our maps brought us onto a paved road running around the edge of Lake Arenal. It was a spectacular drive and we were elated to follow this well-traveled road all the way to our hostel, with small patches of gravel here and there.

We weren’t prepared for the busy and developed town that greeted us after four and a half hours in the car. The small touristic city of La Fortuna is put on the map thanks to its youthful vibes and close proximity to an active volcano, making it a popular Costa Rican destination. La Fortuna was certainly a backpacker hotspot from what we could see. For years, the Arenal has been named one of the most active volcanoes in the world, until it mysteriously ceased erupting in 2010. As a result, La Fortuna has built a substantial tourism industry with visitors coming from all over to check out the Arenal.

La Fortuna left a pretty good first impression on us with an eclectic mix of restaurants lining the streets and the giant volcano lurking in the backdrop. We were pretty happy to find that people in this area spoke very good English and it wasn’t long before we were itching to try some of the outdoor activities.

The top 3 outdoor adventures you shouldn’t miss doing while in La Fortuna:

If you take delight in dramatically increasing your heart rate while climbing a volcanic mountain look no further than hiking the Cerro Chato Crater. This lesser known 3,740 foot volcano sits unassumingly in the shadow of the famous Arenal and has two peaks; Chatito (little Chato) and Espina (Thorn). The Cerro Chato Crater is steep, muddy and jungle ridden, taking an agile hiker 2.5 hours to climb it.
This hike should only be attempted by those in good physical condition. There are two ways to climb this volcano; one trail on the east side near the Catarata de la Fortuna costing $15 USD and another trail on the west side near the Arenal Observatory costing $10 USD. In its center the Cerro Chato Crater has a serene emerald lake in which hikers can cool off midway through their hike before the long climb back down.

We started our day early hoping to beat the sweltering heat of the day. Using the eastside trail near the Catarata de la Fortuna we paid our entry fee and started up the trail. For the first few kilometers we followed a dirt road, with a slight incline and a relatively easy footpath. It was so deceitful because of the strenuous vertical path that was to come. We reached the end of the dirt road pretty quickly and entered the canopy of the Cerro Chato’s jungle. Up, up and up, the dirty overgrown trail seemed to have no end. We climbed, we sweat and we got absolutely filthy before we reached the top. If you are planning on hiking this trail make sure to wear clothes and shoes you don’t mind getting muddy. We got pretty excited when we reached the summit of the volcano and enjoyed the best vantage point of the entire lake. Trees and shrubs covered the entire crater and nestled right at its heart was a peaceful green coloured lake. The hardest part of the hike was the last 200 meters of hazardous trail descending down to the lakes ground level. We had to use our hands and tree roots for maneuvering and I must say at this point it was more of a scramble than a hike.

At ground level the lake had a small bush trail that encircled its perimeter, and we followed the path until we found a clearing with a small rocky beach fit for swimming. The water was pretty chilly when we ran in and sometimes while swimming we could feel small fish poking at your skin. These fish pick and clean away any dead skin cells on your body and we stood in the water letting them give us mini pedicures.

As challenging as the Cerro Chato Crater trail was, it was a rewarding summit. I’m sure any hikers will agree. It was an amazing feeling to have climbed and conquered our first volcano.

La Catarata de la Fortuna is a 230 foot waterfall created by the volcanic eruption of the Cerro Chato Crater. Fed by the Arenal River which twists and turns through the rainforest, this white ribbon of water plunges over a rugged cliff onto an azure basin below. Given the city of La Fortuna’s popularity, it only makes sense that this cascade of water is probably Costa Rica’s most visited and well known waterfall. The cost to enter the Catarata de la Fortuna is around $15 USD per person. Once you enter the park there is a 500 meter walk down a set of steep but well maintained stairs to reach the swimming hole. There is an area for swimmers to wade into the pool and the powerful flow of the water gets stronger the closer you get to the bottom of the falls.

We didn’t get to spend as much time at this waterfall as we wanted. After a full day on the Cerro Chato Crater we wanted to clean ourselves in the falls but didn’t have much time as the park closed at 5PM. We wasted no time sprinting down the stairs to the rocky entry point, ripping off our clothes and stumbling into the refreshing pool. The rocks we pretty slippery and were sharp on our bare feet so if you have water shoes or keens make sure to bring them along when bathing in this area. Sinking into the churning pool we floated in the mist and spray of la Catarata de la Fortuna. Swimming next to this monstrous waterfall really makes you feel so small and insignificant against the forces of nature. The water was much chillier than we expected and the setting sun could no longer warm us with its golden rays.

I’ll never forget as we were drying off, all the flash flood danger signs planted around the waterfall warning that if the waters of la Catarata turn brown there could be a flash flood coming. Fortunately the rainy season was long gone and we hadn’t had any bad weather to worry about the dangers of a flood.

On a hot day in La Fortuna, a visit to the Catarata de la Fortuna is an absolute must. We may have only spent an hour swimming and relaxing at the base of the la Fortuna waterfall but the sights and smells of frolicking around in the cold water lasted much longer.

When I think of volcanoes, Costa Rica’s Arenal Volcano immediately comes to my mind. The symmetrical cone shaped body of this 5, 437 foot tall dormant beauty is a picture perfect masterpiece. The Arenal is a stratovolcano, built upon successive layers of ash, rock and lava. Located a little more than six kilometers from the La Fortuna city center, the volcano has 29,692 acre of National Park that protects both the Arenal and Chato volcano and offers hiking trails and observational points.

The Arenal Volcano has been a red hot mountain of activity spewing ash, rocks and lighting up the night sky for over 30 years. People from all over would make their way to the city of La Fortuna just to catch a glimpse of this rare phenomenon. In 2010, the volcanic activity of the Arenal suddenly stopped and now only on occasion does this sleeping volcano emit rumbles and small puffs of steam.

It was mom’s birthday when we first arrived in La Fortuna and the only thing she wanted to do after our long drive was sit back with a nice view of the sunset over the volcano and drink a glass of wine.

Most of the time the peak of the Arenal volcano tends to be a magnet for clouds (or that’s at least what we have been told by a few locals). Luck seemed to be on our side the day we arrived. The weather was perfect, the sky was blue and there wasn’t a cloud in sight. It took a little detective work and some asking around, but in the dying moments of the day we found a good vantage point and the birthday girl got exactly what she had hoped for. We stopped in at the Sky Adventures Park Restaurant that was close to closing for the evening but allowed us to order a few drinks. We were the only people in the building and had front row seats to an imposingly beautiful sunset and view. What was great about this spot is that by simply ordering a drink we could hang out on the observatory like balcony and enjoy a free pass at the Arenal basking in the setting sun’s golden rays.

La Fortuna is a well-known tourist area in Costa Rica, filled with neat outdoor adventures just waiting to be discovered. Our stay may have been short but that didn’t stop us from trying to explore every nook and cranny of this region. Volcanoes, jungle hikes and waterfalls…when I look back at pictures I can enjoy every moment on repeat in my mind. 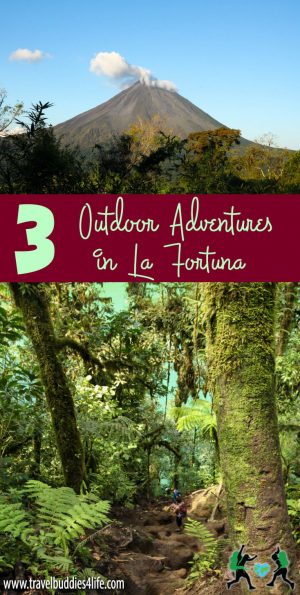