I’ve seen my fair share of spectacular sunsets thus far in my life and there is no place more fitting to watch the sunset than on a beach. From the many sunsets I have seen, none can compare to the color spectacle offered in Costa Rica.

Sunset at the Condo

It was a bit of a learning curve for Joey and me the first few weeks in Costa Rica. Close to the equator, sunsets have a tendency to happen really quickly, something we were not use to. It was unreal how in less than half an hour the day can go from feeling like mid-afternoon to nighttime. We witnessed our first sunset from the pool of the condo. The sky was illuminated in fiery red and orange tones and by the time we realized it was sunset we didn’t have time to run two kilometers down the road to see it on the beach.

On our way to have dinner at one of the restaurants in town a few evenings later, Joey and I lucked out. We realized that it was the dying hours of the day. From the road we could see spectacular orange and pink colours so we sprinted to the Playa del Coco for an unobstructed view. We were not alone when we arrived. Many of the locals, with their families, had gathered to share in the peace and tranquility of the setting sun painting its colours in the sky.

Sunset from the Hill

It took us a few wrong turns and some backtracking, but eventually Joey and I found a way to drive up the top of a hill overlooking the town of Playa del Coco. The incline was steep and rocky and we needed to take a bit of a run at it with the car but we managed to make it to the top in one piece with enough time to spare to get cozy for the sunset. It may not have been one of the better sunsets we had seen thus far, but watching the orange ball of fire sink below the jungle horizon was still a special moment where the universe just seemed to stand still, if only for a second.

The volcano sunset was probably one of my favourite series of sunsets which we caught back to back during our stay in La Fortuna. There was no better way to end the day than to watch as the golden sun disappeared behind the perfect silhouette of the Arenal volcano. We watched it from a restaurant while sipping wine on my mom’s birthday evening and we caught it on the fly while driving home from our Cerro Chato Crater and waterfall adventure the following evening.

Beach Side Sunset with Mom and Dad

On Mom and Dad’s last day in Costa Rica we were fortunate enough to make it out to the Playa del Coco beach for a walk early enough to find a great spot to catch a beach side sunset. We spent a couple hours walking up and down the beach as the waves lapped at our feet. We tried getting comfortable at a few different spots finally settling on the pier as the air hummed and the last rays of sun lay claim on the horizon. Even after the sun setting, the sky held some magnificent colours and Joey and I goofed around jumping off the pier while experimenting with my camera.

I may be slightly obsessed with sunsets but in one short word, they are…EPIC. Nowhere will you find something so breathtaking as watching the big eastern sun dip below the earth’s surface. They are stunning, they are majestic, they are free, they are the perfect end to a perfect day. 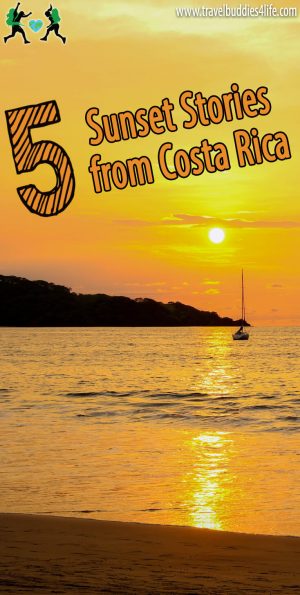