Netherlands: A Horizon of Windmills

The Kinderdijk - My Favourite Place in the Netherlands

It’s hard to believe the last time I was wandering the streets of the Netherlands was three years ago when Joey and I had first gotten engaged. But alas, the time has a way of escaping us.

Our plane touched down at the Amsterdam airport on January 9th after a red-eye Icelandair flight from Pearson International in Toronto. We were freshly married and had scarcely returned to Canada from Central America for Christmas. Following the holiday celebrations, we put ourselves back on the road, this time in Europe, to live our nomadic life.

Of course a trip to the Netherlands isn’t complete without a stop to visit my all-time favourite touristic spot – the Kinderdijk. 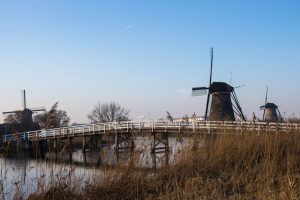 If you have never been to the Kinderdijk, they can be described as the collision of nature and Dutch ingenuity.

The Netherlands, or as some call it “Low Country,” lies well beneath sea level. If nature were to be allowed to run wild, more than 40% of the region would be under the sea. As you can imagine this is a big problem for a country looking to lay its roots and develop. To combat nature’s water forces, windmills and dykes were invented to keep the Netherlands dry. In doing so they unintentionally became an iconic symbol representing the Dutch. 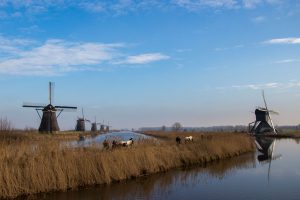 Kinderdijk has been UNESCO World Heritage since 1997. This unique complex of windmills and pumping stations cannot be found anywhere else in the world.

Many years ago, what is now the town of the Kinderdijk, was a peat bog sandwiched between raging rivers and the sea. Settlers who wanted to build homes and farm the fertile swamplands began to construct dykes, water barriers, to keep the river and seawater out. The problem – rainwater and groundwater still flooded the inside of the establishment and needed to be removed. The solution; the birth of the first windmill prototype.

The construction of the Kinderdijk began in the 1740s and has been keeping Dutch people’s feet dry since the middle ages. Some of the windmills still that were built during this time stand strong today. At the height of South Holland’s productivity, there were 150 windmills in the Kinderdijk region. 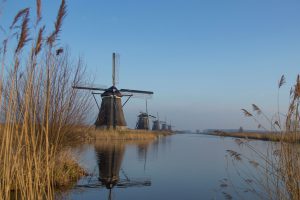 Today there are only 19 windmills remaining along the horizon of the Kinderdijk. All 19 mills are still fully functional and on breezy days their blades can be seen in full rotation. It’s a spectacular sight to see an age-old invention going strong!

Why Kinderdijk is the Best

The Kinderdijk definitely goes down as one of my favorite Dutch destinations ever. Nowhere in the Netherlands can you find so many windmills so close together in one location. There’s something about the place that always makes me smile.

Visit the site for a walk, boat ride or bike on some of the best cycling trails of the country. For €7.00 tourists can visit the Kinderdijk UNESCO World Heritage site and learn all about the history of irrigation all the while hearing the clanking of the spinning mills in the background.

You’d have to have een klap van de molen to not to visit this surreal place. It’s a pretty and relaxing atmosphere! The ambiance of birds, reeds and wide open green spaces is an experience worth relishing. It is also a prime example of man working together with wind and water in a tribute to an ancient tradition and has put the Netherlands on the map. 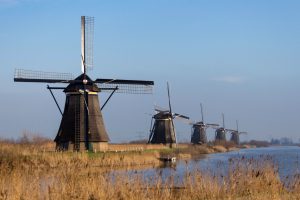 Have you been to the windmills of the Kinderrdijk? What did you think of this epic place?