How to Survive a Hurricane

The Arrival of Hurricane Otto Late in the Season

We had only been in Nicaragua for a couple of weeks when the government issued a country wide hurricane warning. It was the end of November and a hurricane reaching land this far south, this late in the season was one for the record books. Otto, was a tropical storm turned category 2 hurricane, anticipated to make landfall in Central America between Nicaragua and Costa Rica. He would be the first hurricane to ever hit land this far south, and we would be right in the middle of it.

For those who don’t have a science background let me offer you a little insight about how the ocean and climate interact:

In spite of being called Earth, our little planet is actually made up of only 30% land. The rest of our home is covered by water. This water is essential in keeping the planet alive by maintaining the Earth’s habitable temperatures. By absorbing the sun’s rays during the day and releasing the heat overnight, the ocean’s continually store and redistribute (through its currents) heat all over the globe. While oceans not only act as the planets furnace, they also play a role in shaping the weather.

Hurricanes, cyclones and typhoons are the perfect example of weather occurrences that take thermal energy from the water and turn it into mechanical energy in the shape of wind and wave surges. Beginning as tropical storms in the ocean, these three types of weather disturbances are born from low pressure systems feeding off of tropical surface waters of 80ºF or warmer. As warm moist water is absorbed by the tropical storm, the system grows and begins to rotate forming mass convection with an eye in the center. Once the hurricane, cyclone or typhoon moves over land, it can no longer be fuelled by the warm ocean water and gradually loses steam and dissipates. This is why these large scale storms disappear as they move inland.

Given that Otto was approaching from the Atlantic ocean, he was deemed a hurricane by climatologists. The coastal communities of northern Costa Rica and southern Nicaragua that were located in the storm’s path were evacuated by the government to safe and higher grounds. What we didn’t know at the time, was even small cities like Laguna Apoyo, located about 10 minutes outside of Granada, were being relocated into the city for safety reasons. Being sheltered by Lake Nicaragua, Granada is located on the opposite side from where the hurricane would be coming from and we were pretty confident that the hurricane would be reduced to a minor tropical storm by the time it hit us. Granada’s biggest cause for concern would be flood warnings, mudslide warnings and power outages.

Hurricane Otto hit land on american thanksgiving with 177 kilometers per hour winds. Thankfully not very many lives were lost and the extent of the damage was some minor flooding in low lying areas and some destroyed coffee crops. As the storm passed over land it veered towards the south and missing Lake Nicaragua and the area we resided in almost completely. As the storm moved across the country, the class 2 hurricane downgraded to a tropical storm before reaching the cold waters of the Pacific where it would dissipated completely. The most Joey and I saw of Otto was one miserable evening of rain.

Know the Lingo: What is the difference between a hurricane, typhoon and cyclone?

In terms of weather phenomenon hurricanes, typhoons and cyclones can all be considered the same thing; really, really bad tropical storms with sustained winds of 119 kilometers per hour or more. These sometimes catastrophic occurrences, most of the time include torrential rain, high winds, storm surges and flooding. The difference between the three types of storms arises in where they originate, hence why climatologists give them different names.

Nicaragua and Costa Rica was touched by a category 2 hurricane, what exactly does that mean?

Hurricanes can be classified on a universal scale that was developed by a meteorologist and wind engineer. This scale is called the Saffir-Simpson Hurricane Wind Scale named after the two scientists that invented it. The scales goal is to classify hurricanes based on their sustained wind speed.

What’s in a name?

Naming hurricanes has been going on for a long time. The hurricane that touched down November 24th 2016 was named hurricane Otto. As unique as the name is I’m sure you are wondering what exactly that means. In the past, hurricanes use to be named after the patron saint on the day at which they occurred. Presently the naming system is on a six year rotating schedule starting with the first hurricane of the year being given a name that begins with the letter A. The only time a hurricane name is retired is if the storm has been particularly catastrophic causing massive damage and loss of life. Hurricane Otto would have been the 15th hurricane that year, and given that the storm was not severe at all, the name will be used again in 2022 if that season see’s 15 or more hurricanes.

1. Stay Informed: Keep your radio, tv and internet close at hand. By staying on top of local news and weather updates you can keep track of how sever the hurricane is becoming and prepare yourself and your family accordingly.

2. Secure your Home: Preparing your home to meet the wrath of a hurricane can be labor intensive so make sure to do so well in advance. Securing your home includes; using storm shutters (if you do not have storm shutters bolting plywood over your windows should do the trick), storing or securing all loose outdoor material and elevating anything off the basement floor in case of flooding.

3. Stock Up: Hope for the best but prepare for the worst. A hurricane could leave entire residential areas isolated and without water for months on end. Make sure to stalk up on enough food and water to last at minimum several weeks. It’s better to be safe than sorry.

4. Alternate Power: With hurricanes comes the potential to be stuck without power for a prolonged period of time. Having a generator, wood stove, camping stove, batteries or glow sticks on hand can make the world of difference to a stranded victim.

5. Have an Evacuation Plan: Always be ready in case the storm requires evacuation. Having a go bag prepared with the bare essentials and ensuring you have a full tank of gas is crucial in ensuring hurricane safety. Always follow city and government evacuation recommendations so that you don’t become another hurricane statistic.

Just like any other natural phenomena, hurricanes can be unpredictable and destructive. Though we may not be able to predict when and where hurricanes will make landfall, science is advanced enough to give us fair warning. Averaging six hurricanes per year, preparation and planning is key to staying safe on the Atlantic side of Central America between the months of June 1st to November 30th. 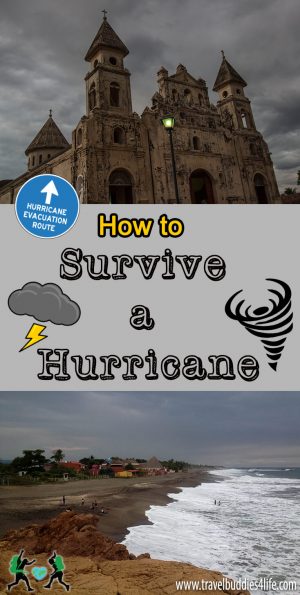