Our Very Own Ant Farm

The Ants go Marching 1 by 1

When I think about going on a picnic, the word “ants” tends to cross my mind and that is exactly what took over our kitchen in one night.

There are about 47 species of leaf chewing ants worldwide belonging to the genera Atta and Acromyrmex.
Exclusively found in South America, Central America, Mexico and parts of the USA, leaf-cutter ants are powerful six legged creatures that can carry more than 5000 times their body weight.

It is probably one of the grossest experiences that we have had to date in Central America. We had been comfortably living at our airbnb in Granada, Nicaragua for over a week. That evening I had harmlessly cut up some cantaloup and pineapple for a post dinner snack. Without so much as a second thought I left the dishes in the sink for the night and boy was that a big mistake. The next morning I awoke to make breakfast only to find our kitchen sink, garbage can and kitchen floor swarming with over a 100 larger than life, leaf-cutter ants preying on the uneaten fruit scraps. It took 2 days before we finally got our kitchen back to normal and even then my overactive imagination could still feel the ants crawling on my legs and feet.

Apart from humans, leaf-cutter ants form the largest and most complex animal societies on earth. A society that depends on group integration and division of labour, a leaf-cutter ant colony is divided into 5 different classes or castes of ants: the queen, the minimes, the minors, the mediae and the majors. The minimes are the smallest of the ant workers that tend to the growth of the brood or the fungus gardens. With a head width of less than 1 millimeter in diameter, think of the minimes as at the bottom of the societal ant food chain. Next up are the minors, the safeguards and first line of defence against any enemies that threaten the ants foraging terrains. Continuously patrolling the surrounding terrain the minors are a little bigger than the minimes and have slightly larger numbers in and around foraging columns. After the minors come the mediae. The mediae are the generalized foragers of the ant colony. It’s these guys that do the grunt work, cutting the leaves and bringing the fragments back to the nest. The major are the soldiers of the ant colony, defending the nest from intruders. Being the largest worker ant of the 5 classes, recent evidence indicates that the majors sometimes participate in other activities such as clearing the main foraging trails and carrying bulk items back to the nest. The last and most important role in a leaf-cutter colony is that of the queen ant. The queen ant is typically the mother of all other ants in that colony. Without her the colony would not exist. The largest ant with the longest lifespan of any known insect, the queen ant’s sole function is to reproduce. This beastly lady rarely leaves the underground nests that can span more than 30 meters in length and reach 9 meters in depth.

Humans have been farming for over 7,000 years, ants have been doing the same for much longer. As much as people think that leaf-cutter ants cut, carry and eat the leaves they so adamantly harvest, they actually couldn’t be more mistaken. The various foliage leaves are cut and transported back to the ants underground homes where they are then grinded and then inoculated allowing ant-fungus to grow. This fabricated ant-fungus is part of the Lepiotaceae family and some colonies even go as far as to creating ventilation systems that maintain fresh air flow over the fungi. With waste management being key in colony longevity, leaf-cutter ants have a mutualistic relationship with the ant-fungus. The mutualistic relationship is born because the ants need the fungi to feed their colony and in turn the fungi need the leaf-cutter ants, and the bacteria that lives on their skin, to combat invading disease and pests in order to stay alive. Apart from humans, leaf-cutter ants are the only other animal species that “make” their own food.

Apart from being a major pest in the agricultural world with an entire colony being able to defoliate a citrus tree in a single day, leaf cutter ants also have large and powerful mandibles that vibrate and even cut through leather, it’s no wonder that this species of ants can pack a pretty nasty bite should you get in their way. Joey and I were pretty lucky that we didn’t get any of our tiny kitchen visitors on our feet or legs when I came across the infestation. Sufficient to say, that was the last time I bought pineapple or cantaloup during our stay in Nicaragua. 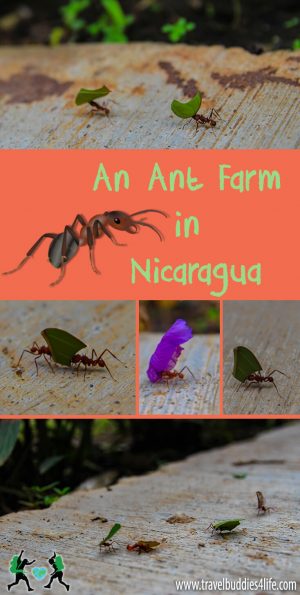