A Week on the Slopes in Flaine

When traveling to France many people fall in love with Paris. Not me. I left my heart in Flaine.

The Ski Village of Flaine

The small ski village of Flaine, France is nestled high up in the Alp mountain range. The highest peak in the area, and in all of Europe, is Mont Blanc standing at 4,808 m (15,774 ft) tall. Being first and foremost a ski and snowboard destination, Flaine is part of the Haute Savoie region. One hundred and forty kilometers of trails make up the slopes of Flaine broken down into: 7 green, 29 blue, 23 red and 5 black. The region gets most of its snow thanks to its high altitude and mostly northern facing slopes and many people call this area of the Alps the “Snowy bowl” because it has the best snowfall records in Europe.

The village of Flaine opened in 1968 and is essentially two centers connected by a lift; Flaine Forum and Flaine Forêt, the latter being the busier of the two. Night clubs, resorts, and restaurants can be found all over this “family friendly” village and travellers will be pleased to know that crime is virtually non-existent here.

Flaine is part of a larger ski linked area, in fact it is the 4th largest in France; Grand massif. This area encompasses Flaine, Les Carroz, Morillon, Samoens and Sixt-Fer-à-Cheval. The massive slopes and panoramic views of this ski region have been captivating winter sport enthusiasts since 1983.

I was pretty excited for our action packed week of snowboarding with Purplesnow, a Dutch winter sport travel company. It would be my european initiation into the adrenaline-fuelled world of snowboarding. Accommodations, rentals, gondola passes, Joey and I didn’t need to lift a finger, Purplesnow took care of everything.

After a long day on the road we arrived in the ski village of Flaine in the early evening. We had travelled from the northern part of France all the way down to where Switzerland hooks into this french country by means of Geneva. Throughout the entire day we watched cities and busy highways dissipate into towering snow capped mountains scattered with quaint villages. Our car climbed and descended dizzying heights as we drove into the heart of the french Alps.

As soon as we arrived in Flaine Forêt, we were greeted by staff who flawlessly checked us into our apartment for the week. From our apartment balcony we had a front row view of the mountains raising up 360° around us. Hats off to Purplesnow they sure know how to pick a room with a view! The following morning we were equipped with our lift passes and rentals. In no time we were on the slopes!

We couldn’t have picked a better day to kick off our vacation. The sun was shining and there was nothing but blue skies above us. Right off the bat the sheer amount of people zig zagging this way and that was intimidating. It took Joey and I some time to get our bearings. This was by far the biggest collection of mountains I had ever been snowboarding on.

We took the closest chair lift we could find and thankfully the wait wasn’t a long one. The lift took us up, up and up into the snow covered mountain. I felt like Princess Elsa riding off into my snow kingdom surrounded by ice crystals and powder.

I was a little shaky getting off the lift still trying to find my snowboard legs. Joey made sure I didn’t take a tumble. We parked ourselves at one of the trail maps to plot out our morning routes. The mountain had pistes from beginner to expert and I certainly did not want to get caught on any double black diamonds (the most advanced trails). Our first run went better than expected, we descended at a decent pace with no bails. It was just like going out for the first bike ride of the season, my body remembered all the twist, turns and most importantly how to stop.

Smiles frozen on our faces things got easier the more runs we did. By the afternoon we lost track of how many runs we had done and eventually made our way for a hot chocolate at one of the slope side bars.

Day 2, 3, 4 and 5 were much the same chills and thrills. We whizzed down steep slopes, got stuck on flat slopes, got lost, ended up on a mogul course, we even watched as a helicopter air evacuated an injured skier from the remote areas of the mountain. In the evenings we enjoyed some apres ski drinks and hot tubbing at the apartments pool facilities. We also explored a little of Flaines restaurants and nightlife. On our final evening we ate some of the best burgers I have ever tasted and danced up a storm at one of the pub bars in Flaine Forum.

We played hard on the hills for five days straight. By the end of the week our legs were numb and achy. On the last day in Flaine our Purplesnow group headed up to the highest peak for a group photo with the stunning mountain backdrop.

It was a fitting end to an epic Purplesnow winter sport adventure!

From the bottom of the ocean to the top of the #Alps, life is all good in the #snowboarding hood. #Traveling with #purplesnow to the majestic #montblanc in #france. 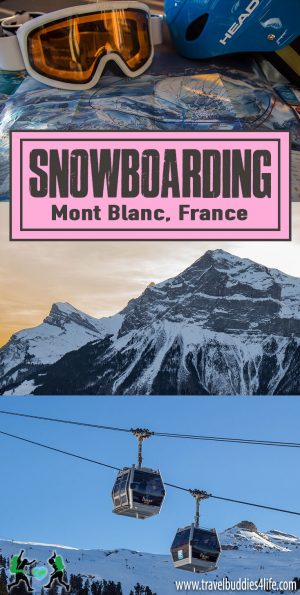