This is not a bucket list to be tackled by the faint-hearted traveller. 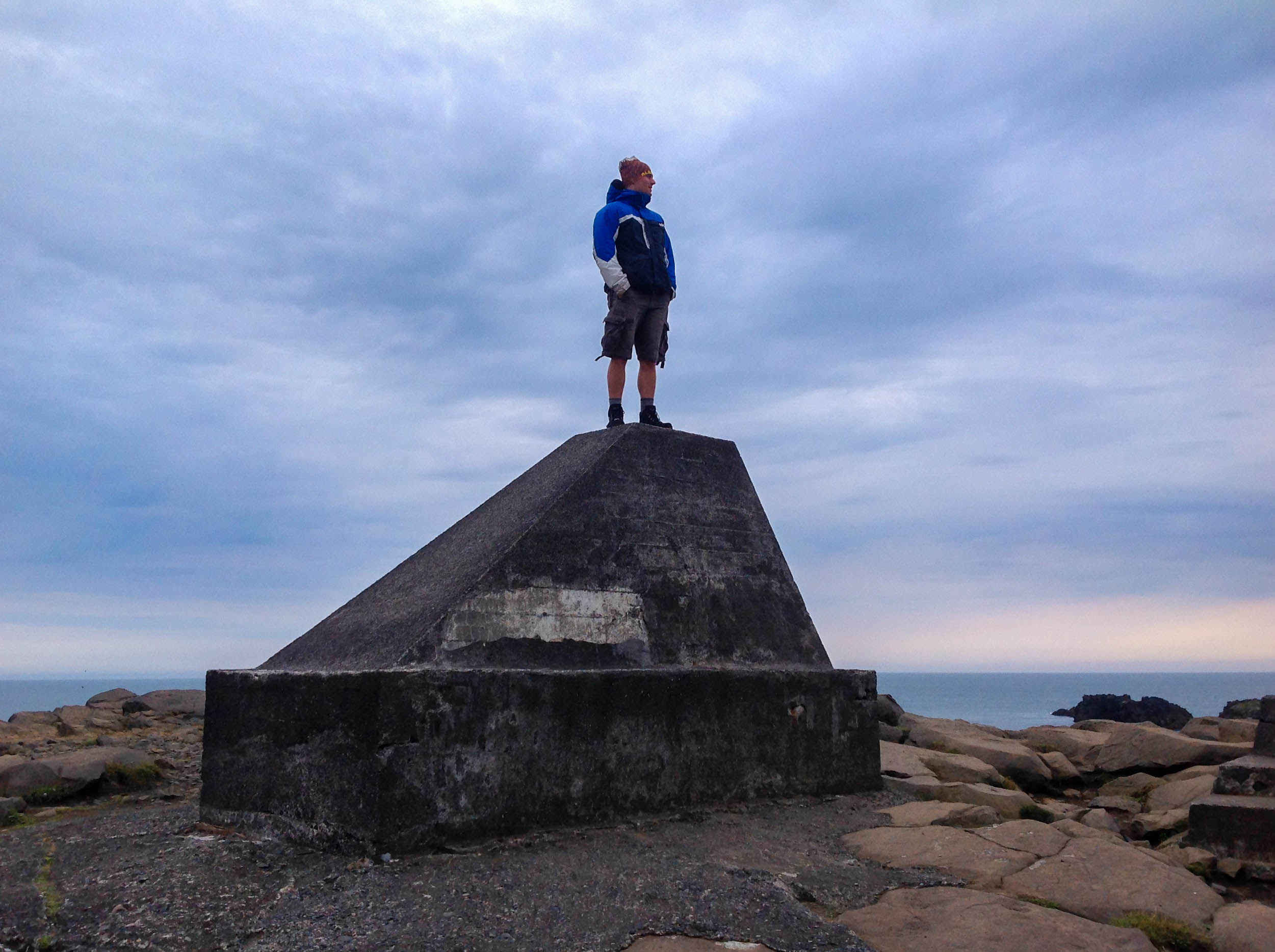 Hot pots are one of the best ways to warm your body against the unforgiving Icelandic weather. You can find hot pots all over Iceland thanks to it’s geologically active location. Hot pots occur when geothermally heated groundwater rises to the surface of earths crust. While some of this heated ground water is safe for bathing, others can be dangerously hot. Not only are hot pots enjoyable and therapeutic but some researchers claim they also have medicinal value due to their high concentrations of minerals.

During our travels, we found this really useful website that highlights all the hot pots found on the island: www.hotpoticeland.com.

Hiking in Iceland’s unspoiled nature is a treat in an of itself, but you haven’t really lived until you have hiked on a volcano. We had a very busy schedule when we toured Iceland, and though we hiked lava fields, sulfur fields and giant craters we didn’t manage to tackle a volcano. All over the island, you will find many tour guides offering volcano hiking trips and you can also find maps to take these trips on your own. Be warned that the weather can be very unforgiving in this country, especially in the highlands (the central region of Iceland’s island only accessible by off-roading). Pack smart and be prepared for any kind of temperature. 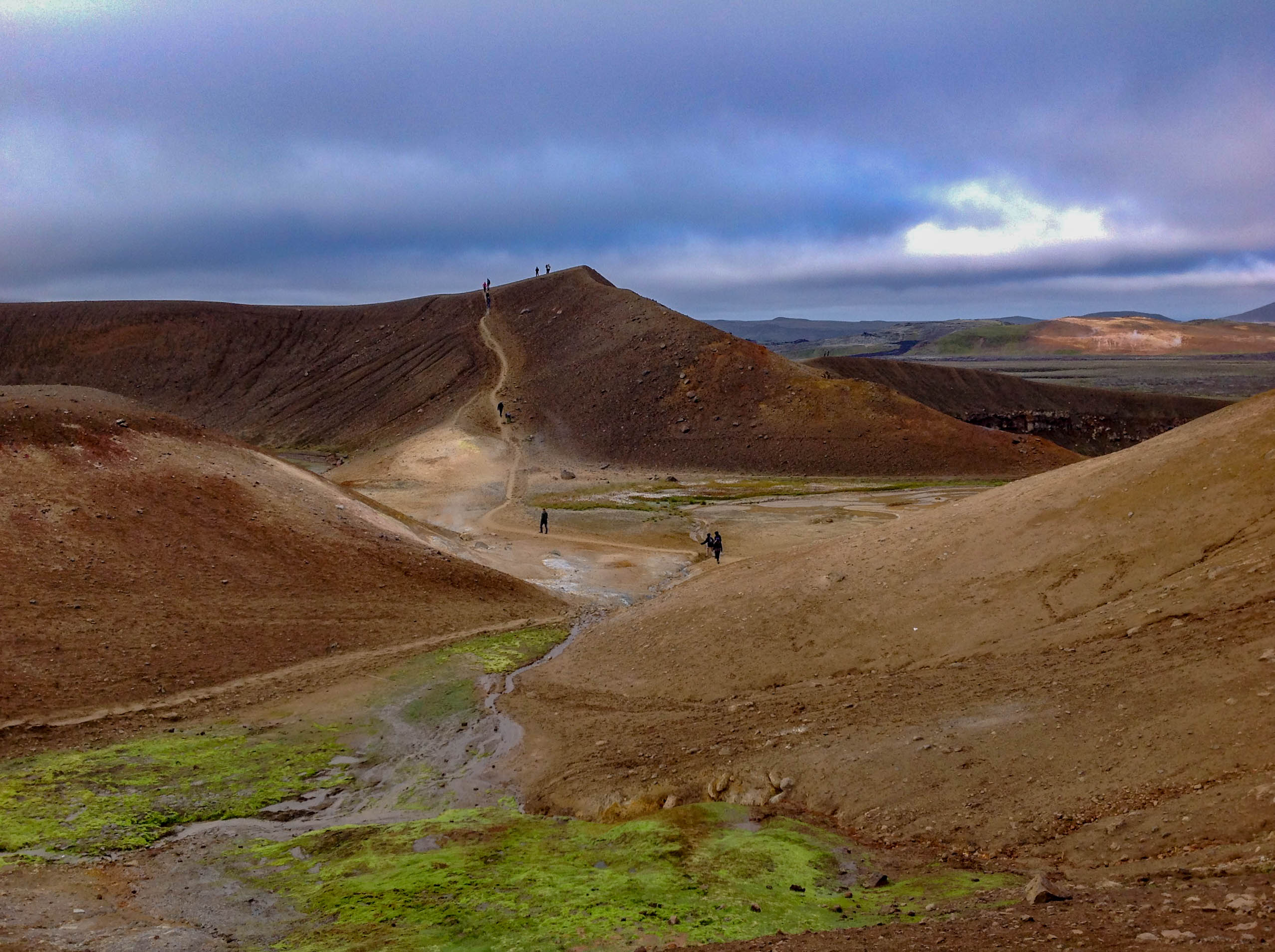 Three things run through my mind at this very moment. ONE: spot a sheep, TWO: sneak up on the sheep and THREE: jump on the back and ride the sheep. It is not a widely known fact that for every three sheep in Iceland there is one person on the island. Icelandic sheep is a breed of domestic sheep. Generally left unshorn for the winter, the sheep in Iceland are very cold hardy. The wool of these sheep is dual-coated and come in white, browns, greys and blacks. Before the trip I always thought of sheep as soft creatures that would lay out in the pastures day in and day out feeding on grass. I never realized how quick and agile this creature could be. As much as the sheep pepper the continent in every spot I looked, no matter how hard I tried I could not get close enough to jump on one’s back, even just for five seconds. Next time we make a trip to Iceland I vow that I will not let this animals get the better of me!

Icelandic language is a beautiful yet challenging language to learn; it has been pretty much untouched since the middle ages. With roots still predominant from Norse or Viking dialect, this language is currently considered and Indo-European language. Though the locals learn English and one other Scandinavian language while in school, nothing beats hearing locals speak their mother tongue so unchanged through time and rich in history. 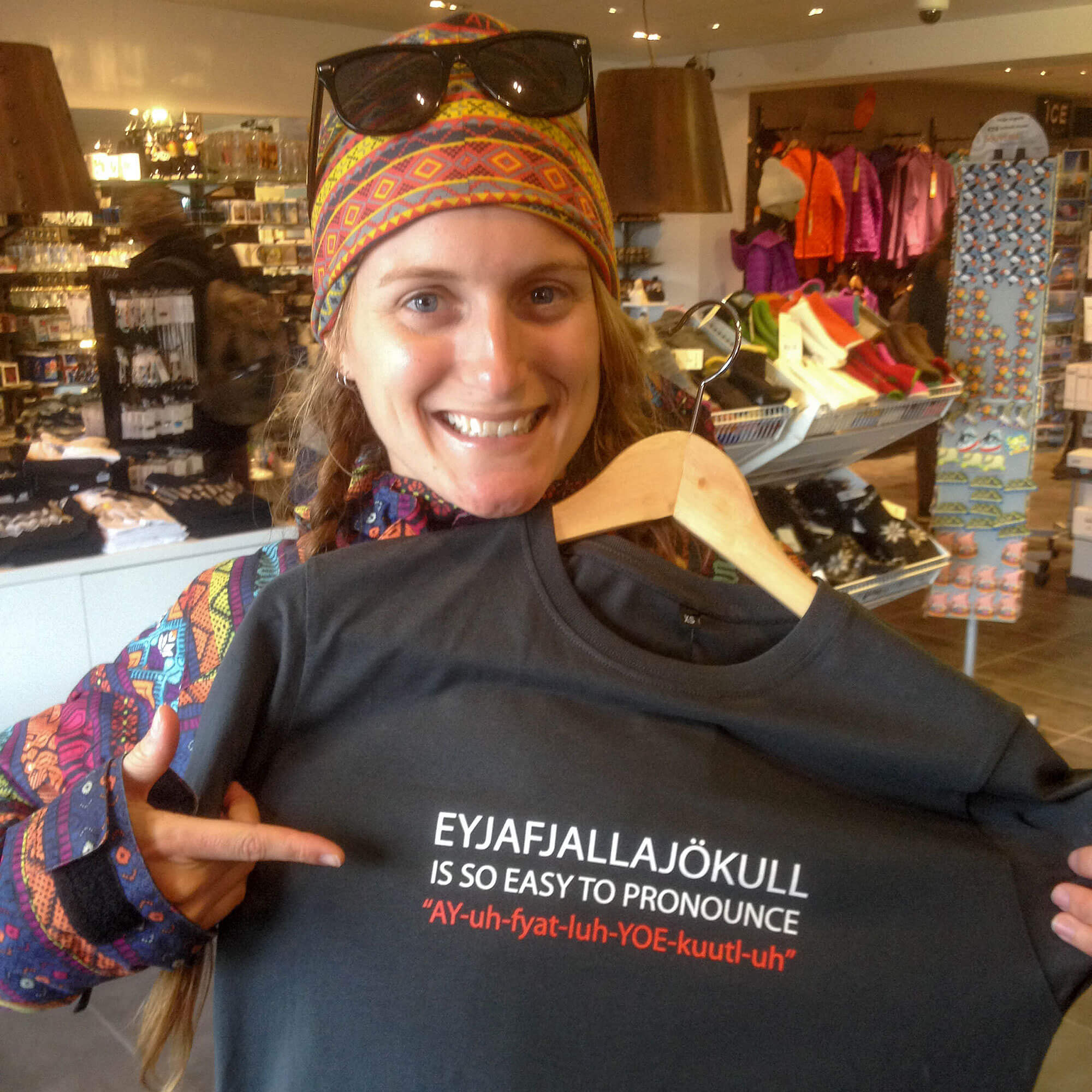 Said to be the best hot dog vendor in the world, the Bæjarins Beztu Pylsur chain has been in operation since 1937. Located in the heart of Iceland’s capital Reykjavik, tourists are often introduced to these hot dogs as the “Icelandic national food.” With famous figures like Bill Clinton and Charlie Sheen having tasted these wieners, it’s no wonder they are so popular with tourists and Icelanders alike. For more information visit the Bæjarins Beztu Pylsur website.

6. Drink the Crystal Clear Water from a Glacier

The human body is made up of 75% water. Having said this, good old H₂O is without question the most important thing we consume. Free of pipe contaminants and free of contraceptives, that don’t fully get filtered out of tap water, glacial water is one of the purest forms of water we can drink. Iceland has about 13 glaciers or ice caps covering about 11.1% of the country. Probably one of the most famous glaciers in Iceland is the Snæfellsjökull. Considered to be an enormous source of energy and often visited by those with an interest in the spiritual and supernatural, it’s main claim to fame was in the popular novel “Journey to the Center of the Earth”. Our beverage of choice however was the Langjökull Glacier. The second largest glacier in Iceland, Langjökull melts, is filtered through the lava stone and supplies a water filled tectonic crack with crystal clear water. While diving the Silfra a famous landmark in Þingvellir National Park, it was a no-brainer to take a few good gulps of water as my mouth got dry (which it often does while breathing compressed air). The water was deliciously cold but oh so refreshing.

The ever elusive northern lights are a phenomenon that typically occur in Iceland between the months of September to mid April. As much as this rare phenomenon is one of the main reasons tourists visit Iceland, there appearance is unfortunately impossible to predict. Dark nights with little to no cloud covering is the best chance to catch a glimpse of these beauties dancing in the sky. We visited Iceland in September. Much to my disappointment, the fall is usually very rainy and overcast in this country. Sure the Aurora Borealis may be there but good luck seeing them through the thick cloud covering. We unfortunately didn’t get to witness the northern lights during our two week tour on the island.

8. Witness the Explosion of a Geysir

The word geyser arises from the old Icelandic word geysa, which means “to gush”. Geysers are a fairly rare phenomenon, needing a specific set of hydrogeological conditions for their formation. Geysers are typically located in a volcanically active area and arise when surface water works its way down into a geyser feeder channel and heats up due to its proximity to hot rocks and magma. When the water temperature builds enough pressure and exceeds the boiling point, a super heated column of steam is sent through the fissure to the earth’s surface causing a jet like eruption. 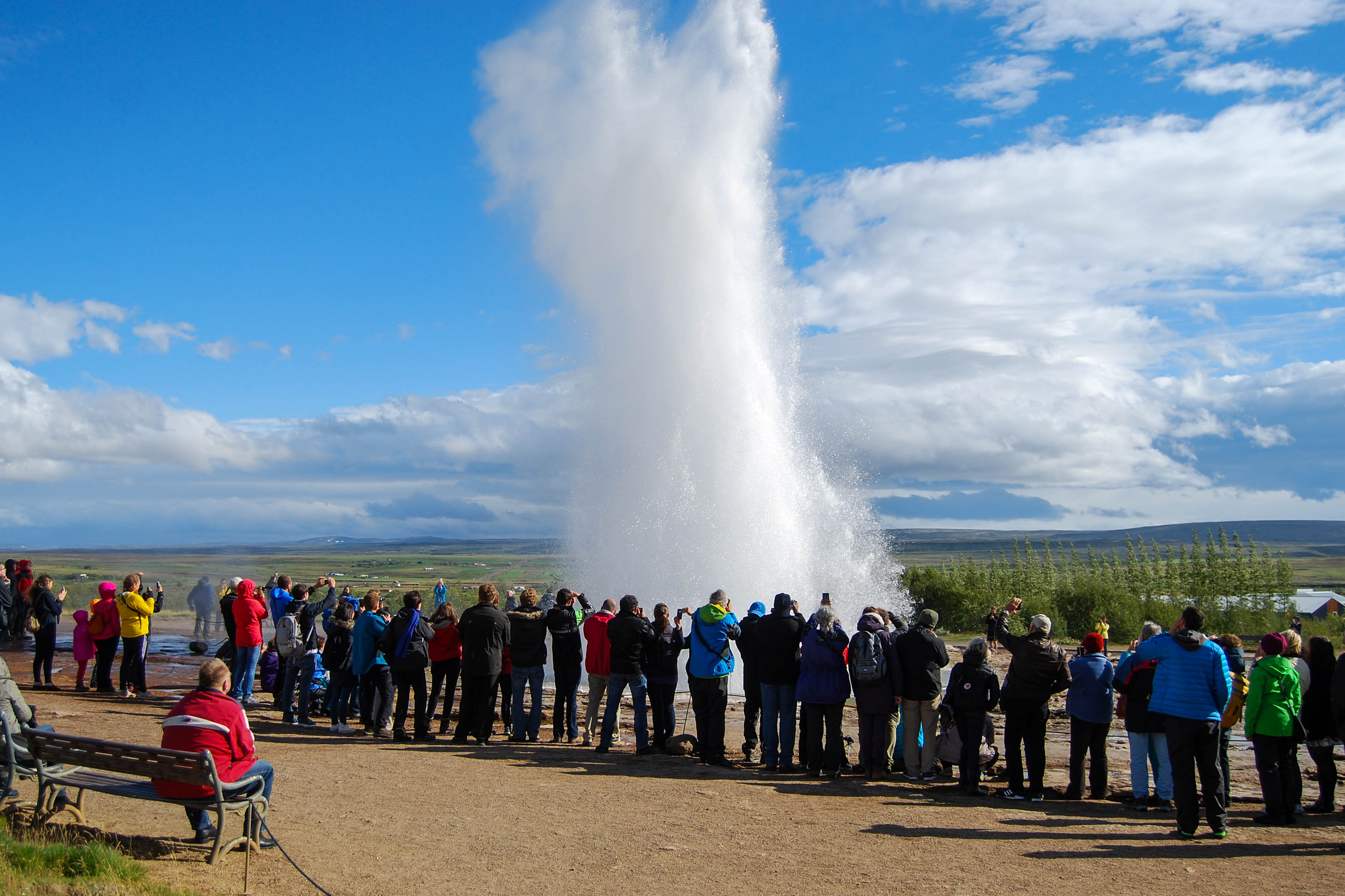 On our last day in Iceland we travelled to Haukadalur to see our first geysers. It was easy to tell we had arrived by the unpleasant rotten egg smell that overpowers the senses. With geothermal fields that cover about a 3 km² surface, we hiked around dormant geyser’s and bubbling mud pots until we arrived at the main attraction. Currently Iceland’s most active geyser, the Strokkur spouts a hot water cone of 10-20 meters high every ten minutes. Standing there with our camera’s waiting for this unpredictable spout to take place was a little like waiting for lightning to strike in a thunderstorm, you know it will happen you just don’t know when. 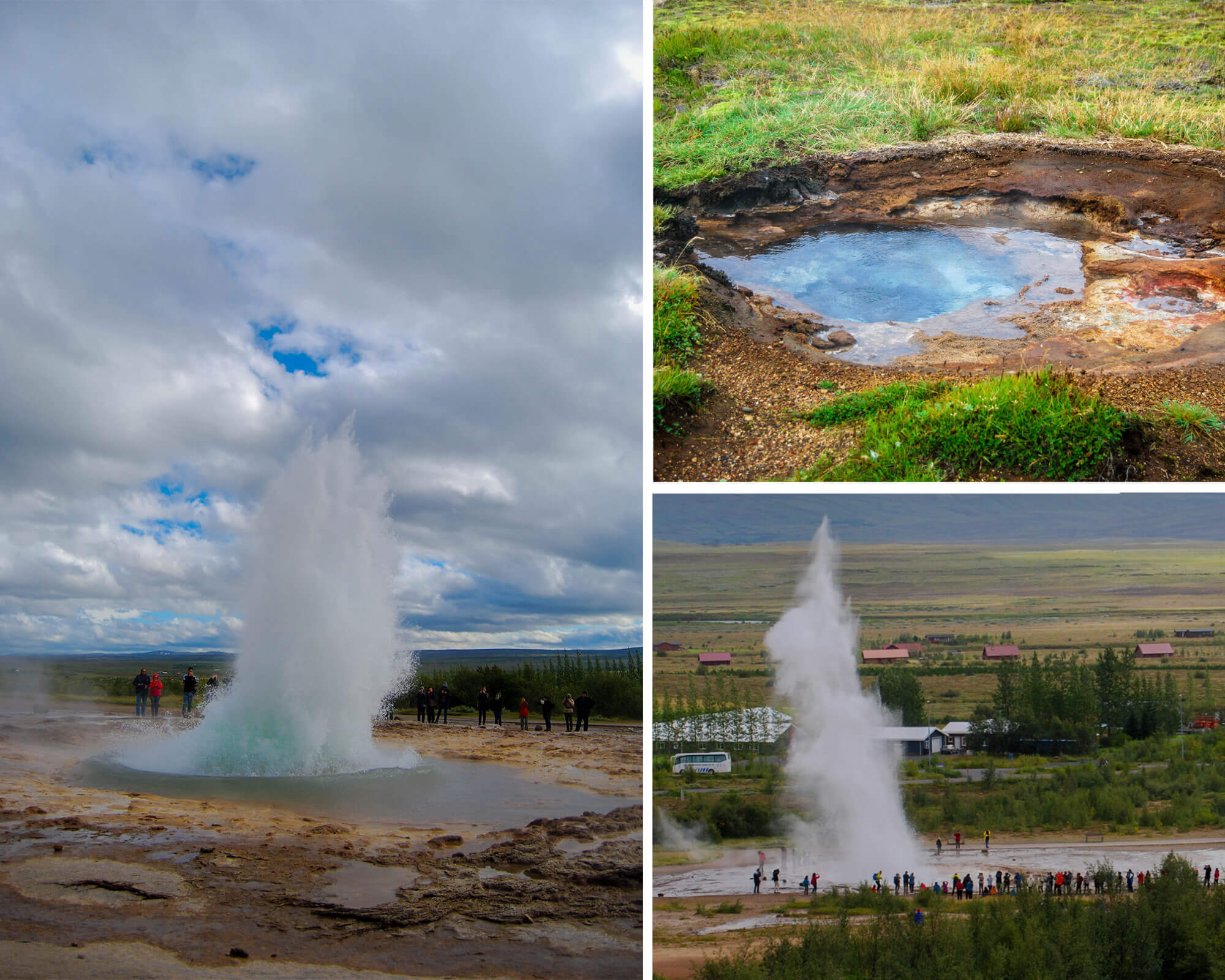 Formed by light reflecting, refracting and dispersing off of water, rainbows are a meteorological phenomena that cause a multicolored array to appear in the sky. Observable whenever their is water droplets in the air and sunlight shining, rainbow have a color spectrum of red, orange, yellow, green, blue, indigo and violet. Given the many waterfalls in Iceland and the ever changing weather, this country is a prime spot for getting some serious rainbow photographs and maybe if you’re lucky seeing a double one.

Enjoy and get ready to dive into extreme Iceland!

For us, we visited the country in September, and while most of our time in Iceland was spend in the rain, that certainly did not dampen our spirits (although sometimes it did come very close).

For your trip to this isolated northern country, here is a little teaser at the fun things that await you on your travels. There is not time like the present to cross off items on your bucket list. 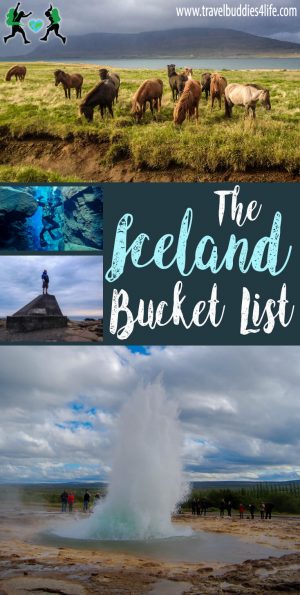