The Land of Vikings

There is a magical place where fire and ice meet. Shaped by the forces of nature, Iceland, an island hub between Europe and North America, is slowly becoming a popular tourist destination for avid outdoor enthusiasts. Located just a hop, skip and jump from the Arctic circle, this country prides itself on green power and sustainability, tapping into mother nature’s geothermal energy.

Though Iceland may be well known for its volcanoes, glaciers and woollen sweaters, it is perhaps best known for its historic persona; the Vikings. Vikings were Norse seafarers, living between the 8th and 11th centuries, who raided and traded from northern Europe all the way to the Middle East and Central Asia. Vikings were able to expand and explore such a vast amount of territory thanks to their advanced seafaring skills demonstrated by one of their greatest nautical inventions; the longship, a vessel designed for speed and agility.

It is estimated that in 874 is when the first recorded settlement in Iceland occurred. Discovered accidentally by Naddoodd, a viking sailing from Norway to the Faroe Islands, Iceland’s population became mostly Norwegian folk fleeing the country or looking for new territory to build farms.

It has been about a year since Joey and I set foot in Iceland. Previously we had arrived on a layover, needing to kill 8 hours on our way from Europe back to Canada. Arriving solely in summer clothes, we were exposed to the harsh elements even at the tail end of summer. Soaking our cold bodies in the Blue Lagoon was where we spend most of our layover, and from our first experience, we were hooked.

On our second time visiting Iceland we were better prepared and brought along my parents. A red-eye from Toronto Airport directly to Keflavík via Icelandair was our choice of flight. Actually, it was one of our only choices of flight considering Icelandair is one of the few companies that fly in and out of this remote northern country. We landed close to the capital city Reykjavik and made our way through customs. Unsealed fluids are not permitted in the country and we didn’t want to lose our spot in the long customs cue so we had to chug every single nalgene bottle of water we had in a span of 15 minutes (a note to the readers: we did not leave the airport without going to the bathroom, especially with my Dad who has a bladder the size of a peanut). Once at border security the most they asked us was for our passports. To Joey’s dismay, he did not get an Icelandic passport stamp like the rest of us due to his Dutch citizenship.

We checked into our elevator-less hostel in the wee hours of the morning, after a 45 minute shuttle bus ride into Reykjavik. At this point we had all been awake for more than 24 hours and our brains were processing things a little more slowly than usual. Getting the key to our room on the top floor, the four of us dragged our copious amounts of luggage and our butts up to bed to catch a few hours of Z’s.

The alarm woke us from our slumber in what seemed like mere minutes (it was really several hours later). We were rejuvenated by the nap and some coffee (drank from bowls because we had no mugs) and it was time to explore. Our first order of business was finding a grocery store for lunch and supper that night.
The hostel, was a fair walk from downtown so we made sure to put on comfortable shoes. On our way into town we passed by Reykjavik‘s waterfront. A popular draw to this waterfront is an abstract silver art sculpture of a viking ship. Built by sculptor Jón Gunnar Árnason this art piece represent the promise of undiscovered territory, a dream of hope, progress and freedom for Iceland. Donned the Sun Voyager, this ship is located right beside the water and towered several feet over visitors. It won’t surprise you to know that, like two kids on a jungle gym, Joey and I climbed all over this sculpture trying to get as high up as we could for a picture while mom and dad watched on.

An hour later, Joey and I quit horsing around on the silver ship and we moved on to check out the heart of the city. We toured churches, museums and gift shops before finally locating a supermarket. It took some Nancy Drew detective work to figure out the contents of some of the products, and Joey’s math wizard brain to convert the currency so we knew how much we were spending, but we finally left with enough food to satisfy our hunger for the next few days. That evening Mom made us a great microwave meal and we all went to bed early so that we would wake up bright-eyed and bushy tailed for our adventures planned the next day. 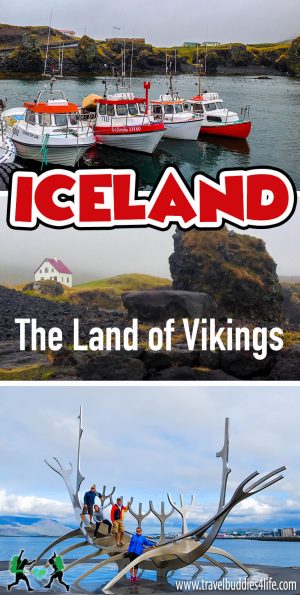