Recklessly Flying Down a Volcano at Over 45 Kilometers per Hour

Put on your hiking boots, goggles and one piece crash suit, this weekend we traveled to Léon and learned to volcano board.

A Look into the History of Volcano Boarding

The art of volcano boarding was invented by Australian Darryn Webb. Following a sever bike crash by the french sportsman Eric Barone, who attempted a record breaking 107 kilometers per hour descent of the Cerro Negro, Webb saw the potential to invent something great. Many mattresses, mini fridge doors and even upside down picnic tables later, the ambitious Australian settled for a simple piece of plywood reinforced with metal and Formica (a New Zealand brand of laminated plastic).

It took about ten years for the sport of volcano boarding to emerge as a main attraction and transform the sleepy city of Léon into a tourist hot spot and looking back after having tried the sport, it’s no secret why.

Though there are a few volcanos in and around Leon that are well suited for volcano boarding, none compare to the Cerro Negro, the birthplace of volcano boarding. Born in 1850, the Cerro Negro is Central America’s youngest and most active volcano. The name Cerro Negro, literally translates to Black Hill, and fittingly describes this black mount of volcanic ash and rock standing out like a sore thumb amid the the green farm land and vegetation in its surroundings. Don’t let the seemingly inactive mount fool you, the Cerro Negro is actually a basaltic cinder volcano, part of the volcanic chain that creates the famous Pacific Ring of Fire. What’s cool about these cinder cone volcanos is that when they erupt, lava explodes from the bottom consequentially making them higher with every emission.

A Breakdown of the Volcano Boarding Sled

Volcano boards are a very simplistic design built for durability and speed when flying across sharp volcanic rocks. Functioning like a sled in the winter time, each board is built like a wooden toboggan coated with a durable metal base. On the bottom, there is a thin strip of formica plastic glued to its metal surface around the area where your butt would be sitting. This plastic is one of the more important parts of the volcano board and is replaced every tour to give volcano boarders extra speed. At the front of the board there is a secured rope for your hands to use for maneuvering and balance.

Joey and Ali Take to the Hill

It had been a long and sleepless night for us at Bigfoot Hostel. Trying to catch some Z’s in our private room that was hotter than a sauna before our day of volcano boarding had been fruitless. We ended up getting moved into the men’s dorm room which was much cooler.

Our adventure started at 9 am sharp after we had gotten our safety briefing. Our rowdy group of 30 packed into the back of a tractor trailer for the 1 hour backcountry drive to the Cerro Negro. It was a wild ride as we passed down treacherous dirt roads, took out overhanging trees branches and spooked cattle at every turn. In the center of the trailer our guides had a large speaker blasting some hip hop tunes getting our group ready for an adrenaline filled day.

At the base of the Cerro Negro we donned backpacks holding protective goggles and a hideous orange jumpsuit, grabbed our bulky wooden boards and began the 728 meter ascent. The climb took about 45 minutes, the first section weaving around boulders and rubble. Those in our group who weren’t fit enough to carry their sleighs could hire locals for $5 USD to carry their boards to the top of the volcano. We passed along steep narrow ridges and colourful smoking craters. The higher we climbed over the bizarre landscape the better the view of the Nicaraguan farmland.

Even after having recently completed an Ironman and being at the peak of our physical fitness, Joey and I still huffed and puffed our way to the top. It was far windier at the summit than it had been on the ground and swirls of fine black ash that made up the bulk of the hill blew into our faces with the passing breeze. One by one the people in our group descended, some a lot quicker than others. It didn’t take long for us to realize that volcano boarding is a lot more challenging than it appears. There is a method to this madness.

When it came time for my turn I was amped and ready to go. I parked my butt on the back portion of my sleigh, the section which offered the least amount of resistance thanks to the plastic strip, grabbed the front rope evenly with my hands and lifted my feet. JERONIMOOOOOOO!

The first part of the descent went relatively slowly. I was getting used to steering the board with my feet and the slope was only slightly inclined. At about the halfway mark that changed. The slightly inclined slope became very inclined and I could feel the sharp volcanic stones flying everywhere. It was dusty, dirty and total rock chaos. I could feel my shoes filling with ash and my hair covered in sand. As ugly as the jumpsuit was, in that moment I was very grateful for it protecting my skin from the jagged rocks.

At the base of the steep slope I whizzed by one of the Bigfoot staff who was standing front and center with a speed gun. With every passing volcano border he shot and recorded their speed. I certainly wasn’t going to break any in house speed records that day, but I was still going pretty fast. The guides clocked me in at 50 kilometers per hour, the second fastest female of the day.

Joey was the last volcano border from our team to tackle the hill. Watching him from the bottom I could tell he was hungry for some serious speed. About 20 feet from the speed gun he lost control of his sleigh and did a double barrel roll bail into the rocky powder. Body still intact and unscathed, much to my relief, Joey unfortunately did not get a very notable speed. Once we’d changed out of the jumpsuit and cleaned the sand from every exposed part of our body, we boarded the tractor trailer where our volcano boarding guides were waiting for us with nice cold beer and a snack to conclude the day. What a rush!

A thrill seeker at heart, after having tried volcano boarding on the Cerro Negro and loving every second of it (even the exerting climb) I would recommend any traveler vacationing to Nicaragua to put this activity on their list. It may sound like an odd pastime but there is nothing more freeing and intimidating than flying down a volcano at over 45 kilometers per hour. 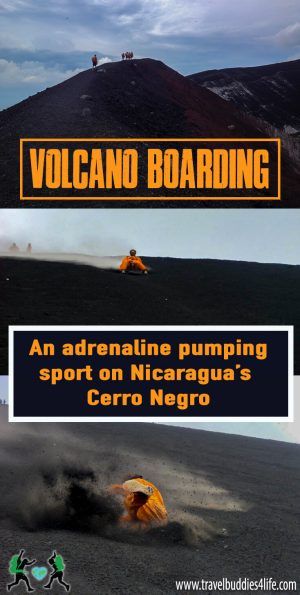