Crossing the Border from Costa Rica to Nicaragua

Vamanos Costa Rica! We bid Costa Rica farewell on a beautiful sunny morning and moved onward and forward to our new home for the next month; Granada, Nicaragua. The trip was a long day and all I could do was hope that finding and checking into our Airbnb would be easier than the last.

Costa Rica and Nicaragua are neighboring countries found just north of the equator. From Playa del Coco it would take us about 5 hours by vehicle to travel to Granada, Nicaragua. Seeing many Costa Rican tours companies bringing vacationers to Nicaragua for the day, I imagined that crossing the border between these two countries would be easy enough.

Checking out of Costa Rica

For all those who are naive like me NEWS FLASH; leaving Costa Rica via ground transportation wasn’t as easy as I’d imagined it.

Getting ourselves checked out of Costa Rica was a process involving many separate pit stops and sketchy little offices. One office to pay our exit taxes, one to verify and prove that we had payed our exit taxes, another office to declare our goods and finally the last office to get that ever elusive passport stamped. I’m sure it took us the better part of an hour to simply leave the country.

We thought getting out of Costa Rica was bad. That was nothing compared to getting into Nicaragua… This country has one of the stricter border controls of Central America.

The Peñas Blancas border crossing is the only official entry point between Costa Rica and Nicaragua. It is considered the gateway separating North America and South America via the Pan American Highway. Because of this, it is also the single largest drug transit point between continents. On a good day the border crossing is about a two hour inconvenience. I guess we fell way short of a good day. When we arrived the Peñas Blancas border was crawling with police, military and border security.

There were 4 stages involved in passing from Costa Rica to Nicaragua via the Peñas Blancas border crossing:

1. Decontamination Station: The very first step in getting from our familiar territory of Costa Rica into the strange and daunting land of the Nico’s was passing through a decontamination station. It was nerve wracking to have men in full face masks and jumpsuits advance on our car and vigorously hose it down. Our driver was pretty fearless as he drove through this chemical car wash and out the other end into a wide open parking lot full of trucks, panhandlers and people bustling around trying to sell souvenirs.

2. Passport Inspection: The make it or break it part of our vacation. We had our entire trip planned, we had everything paid for. Now the moment of truth; when we would actually figure out if Nicaragua would allow us to enter their country. I always get antsy during this process, handing over our passports, unsure of whether to smile or frown, while they size us up and decide if I should be welcomed with open arms or cavity searched.

3. VISA Purchase/Entry Fees: Next we were pointed to a little ticket booth at the opposite end of the customs office. Not knowing what the customs agent had mumbled in rapid Spanish, we were pretty fortunate to have our driver translated and tell us we needed to pay the guy in the booth a few bucks for a visa certificate. From our understanding we would need to keep this VISA with us and return it to customs when we left the country a month later.

After purchasing our VISA we were told to wait in the car while our drive sorted out the inspection papers, we assumed we were out of the woods. Think we were finally done? Think again. About an hour later, out came our driver with a customs agent interested in seeing what was in the trunk of our car. And just like that we were back inside the customs office…

4. Luggage Inspection: The final stage of our border inspection process was having our baggage inspected. We grabbed our 4 large bags and lugged them into the station. There they were sent through an X-ray scanner. I felt like we were at the airport. Having all our work laptops, extra screens and camping gear with us, the border police requested to open and search everything. It was a real mess. Because we had brought so much computer equipment with us, we were very close to getting charged an import tax, but luckily got by on only a warning.

When all was said and done and we had officially made it past the border, our driver told us to keep our passports handy. About 10 minutes down the road we quickly figure out why. Seven heavily armed military men stopped our vehicle to quickly check our passport stamps and VISA’s ensuring we had legally entered the country. These random check points occurred repeatedly over the next 50 kilometers. I think we were stopped about five times. Once we had traveled far enough into Nicaragua the heavy security died out and we were home free.

It wasn’t long before our vehicle was speeding past horse drawn wagons and random animals grazing alongside the road. Moving from one country to the other was like night and day. Where Costa Rica is one of the more expensive places to live, Nicaragua is the second most impoverished country in Central America, and you could immediately see it. People were desperate for money selling everything from mangoes to origami palm fronds.

To our relief finding our Airbnb went flawlessly and apart from the small language barrier with our host (she didn’t speak an ounce of English) we settled into our new home in no time. Relieved to have made it into the country and exhausted after a long hot day in transit we packed it in early that night.

Way to leave your mark Peñas Blancas. For a border I had never hear about, it sure was one that I will never forget! 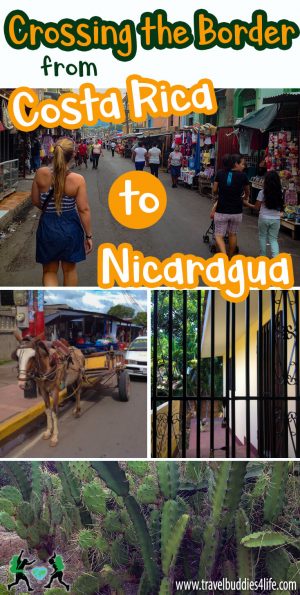