Cloaked in the jungle forests of Tenorio Volcano National Park, the enchanting blue waters of the Río Celeste river spill into one of the most magical waterfalls that I have ever seen. You almost need to see it to believe it.

As badly as I wanted to hike to the Río Celeste, it was certainly no walk in the park getting there. For one we had really picked the wrong type of vehicle to rent for some of the dizzying back roads we took. For anyone traveling to Costa Rica, you will certainly want to check out our blog post dealing with getting around Costa Rica.

Despite being a big tourist destination the road to the Río Celeste was truly atrocious. Rough, deserted and broken roads spilled out before us as we tried to make our way to the national park. Time and time again Mom, Dad and I had to hop out of the car and trek up the hills on foot while Joey climbed, tires spinning and rocks flying everywhere. Somewhere along the way Dad and I even jumped in the SUV of a local family and got transported several kilometers over some pretty unforgiving terrain. Thus making our own dinky car lighter with just that extra bit of ground clearance.

At high noon we passed into Tenorio Volcano National Park and arrived at the parking lot for the Río Celeste hiking trail. We were literally in the middle of nowhere; off the grid with nothing but jungle for miles.

A Little Bit About the Río Celeste

The name Río Celeste, translates from Spanish to mean light blue river. According to local legend the river and waterfall gets it extraordinary azul colour from God washing his brush in the river after painting the sky blue. Modern science has come up with another explanation; mie scattering a phenomenon we had witnessed before in the Iceland hot springs. A mineral composed of aluminum, silicon and oxygen found suspended in the river, reflects light from the sun in such a way that to the human eye the water has a blue colour. Scientists have attributed the estranged coloration of the Río Celeste not because of chemistry but because of optics.

Still stiff and sore from our hiking escapades in La Fortuna, we put one foot in front of the other after we payed the $12 USD per person entrance fee for the park. There are 2 trails to get to the Río Celeste waterfall; a 1.5 kilometer hike and a moderately challenging 7.5 kilometer hike. We had parked at the entrance to the shorter and less intensive hike.

The first part of the hiking trail in relatively flat and well kept. The four of us breezed through the path and bridges, stopping at the panoramic lookout to see some interesting cloud forest critters. The closer to the waterfall we got, the more challenging the trail became. We were lucky that it hadn’t just rained; the mud and loose dirt would have been pretty messy.

We walked and walked for 20 minutes, arriving at a fork in the trail taking us down to the waterfall or up to the lagoon and river confluence. The decision was unanimous; we descend 250 steep steps towards the Río Celeste waterfall. While the trail does not allow you to go right to the base of the waterfall and swimming is not permitted, the small viewing platform hanging along the rocky cliff brought us close enough that we could feel the mist spraying off the 60 foot (20 m) waterfall. It was a savoury view. We spent a good 20 minutes watching 14 kilometers of river plummet down creating into one of the best waterfalls Costa Rica has to offer before making our way back up the steps.

At the top we followed the second fork in the road taking us across rickety old bridges and even deeper into the forest. We slowly and steadily climbed up, following the jewel colour river to the first point of interest (after the waterfall obviously). Laguna Azul or the blue lagoon was a calm and quiet pool of water surrounded by lush green vegetation. We stopped here for some lunch and to appreciate the enchanting surroundings of forest and water coming together. To me the peaceful area had a magical sensation about it, and made me think of a mermaid lagoon like the one in Peter Pan.

With full stomachs, we were back on the trail hiking further to the next site “the Borbollones”, also known as the hot springs. As much as they are called hot springs these are not the kind of hot springs you are permitted to swim in. Unfortunately in the boundaries of the National Park no swimming is permitted in the Río Celeste river. Approaching this region we could smell the classic odor of offgassing sulfur. As we closed in on the hot springs we could see the bubbling mud and heated water in the river below.

The last location our hike brought us to was the section of the trail where the two rivers merge together called Los Teñidero. Here we saw the Quebrada Agria (Sour Creek) and Río Buena Vista (Good View River), mix together and flow into the famous blue river known as the Río Celeste. Apart the two rivers are crystal clear but when both come together the combination of trace minerals found in both rivers causes the unique coloration from Los Teñidero onwards. What a neat natural phenomenon!

It may have been a little out of the way but the Río Celeste waterfall was on my Costa Rican sightseeing list and anyone visiting the northern region of Costa Rica should try and do the same. The jungle hike and waterfall in my opinion was better than the Monteverde cloud forest.

When gearing up for an adventure at the Río Celeste don’t forget to pack:

On top of making sure you have the right gear keep in mind that when hiking the Río Celeste there are 5 points of interest you want to make sure you see; the lookout, the waterfall, the blue lagoon, the thermal springs and the convergence of the two rivers.

It was brutal trying to get to Tenorio Volcano National Park to hike the Río Celeste but I am glad the pitiful roadways didn’t impede our exploration. I can now understand why this waterfall is one of Costa Rica’s pride and joy. After a long day on our feet we piled in the car around supper time to continue our drive home to Playa del Coco.

Adios Río Celeste, it’s been fun but it’s time to head back to civilization! 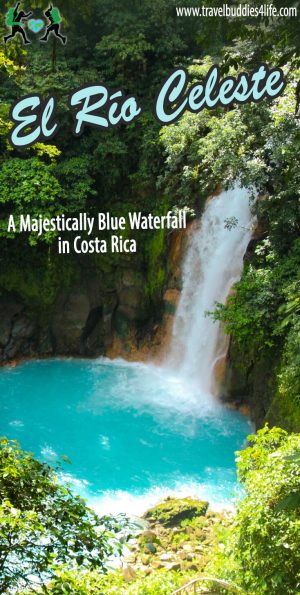