Greece: A Day at an Olympic Stadium

Traveling sports fans rejoice, Athens is not all mythology and ancient ruins! If you’re looking to fill that athletic void during your Greek vacation, head to central Athens and make a pit stop at the Panathenaic Stadium. 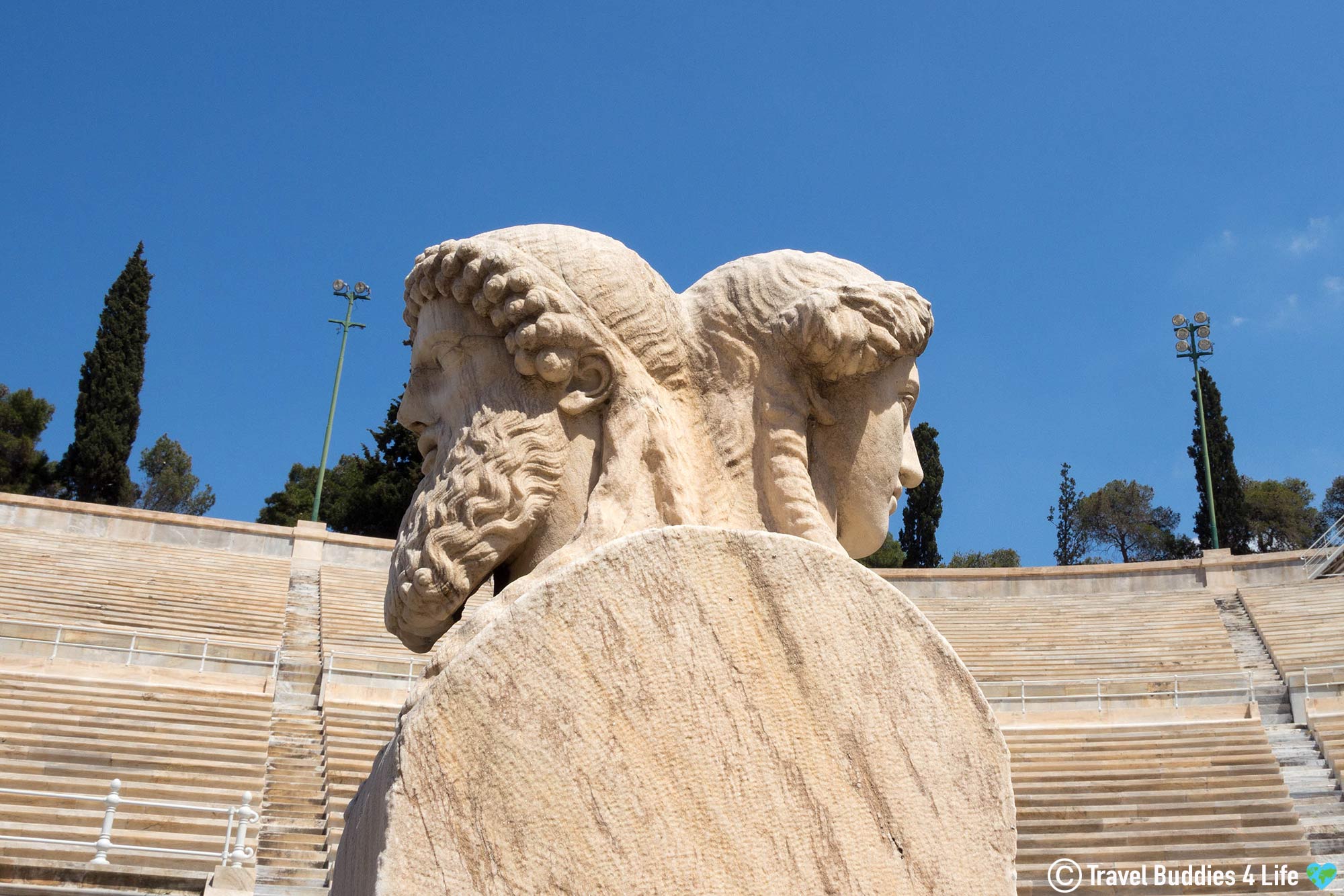 The Panathenaic Stadium is a Greek sports stadium that was used for many centuries to host games in which nude male athletes competed in track events or athletics championships as we would call them today.

This stadium has left its mark on the athletic world as being the only sports stadium built entirely out of marble. Over the centuries it has gone through several reconstructions each more glorifying than the last. What started out as a primitive wooden stadium in which nude men competed in basic track and field events, has been reconstructed into a beautiful white athletic compound, the marble used in the construction coming from the nearby mountain; Mount Pendeli.

A stadium unlike any other, this arena is not only significant for the city of Athens itself but for the whole of Greece. On March 24 1896, the Panathenaic stadium hosted the first modern Olympic Games. People traveled from far and wide to watch elite athletes compete in athletics, gymnastics, weightlifting and wrestling. The Olympic Games became a smashing success and an instant worldwide tradition.

The games returned to Athens in 2004. In order to pay homage to this cultural milestone for the Olympic Games, the stadium was used for the archery events and as the finishing point for the men’s and women’s marathons. 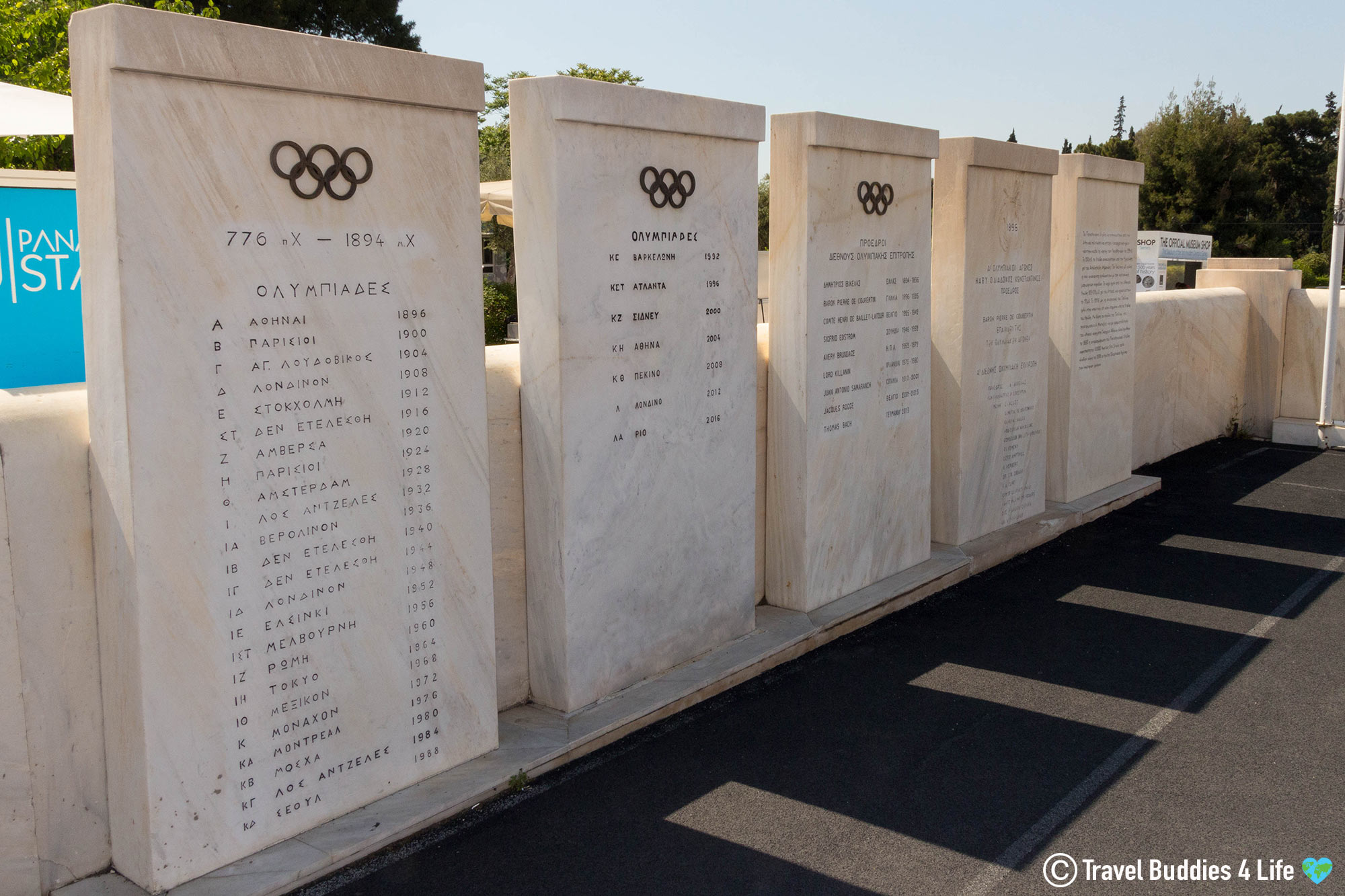 Though the Olympic flame was first introduced to the 1928 games in Amsterdam, the symbolic meaning behind this ritual does stem back to Greek origins. The flame is said to be an icon with divine connotations, representing the theft of fire from the king of the Greek gods; Zeus by Prometheus.

Now every two years, during the summer and winter Olympics, the Olympic torch is lit at the opening ceremonies and kept burning during the entire 2 weeks of games. The Olympic flame always begins its journey a few months before the games from the Panathenaic Stadium to the host country, traveling a route that symbolizes worldly achievements. 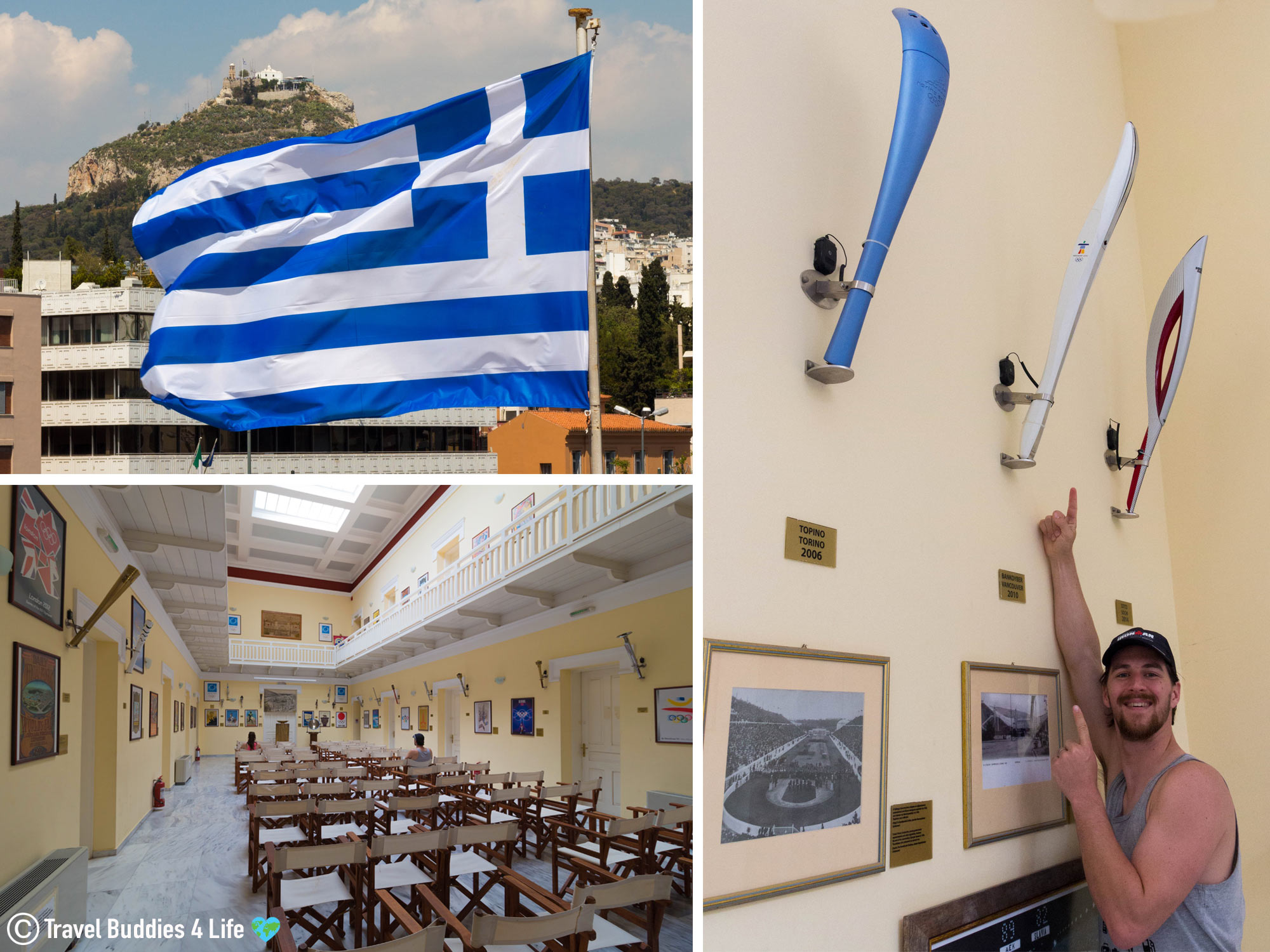 Being true athletes at heart Joey, Nadine and I spent the better part of our day at the Panathenaic stadium. When we weren’t listening to our audio guides sucking up some of the history, we were climbing the steep marble stairs for a picture-perfect view or racing each other around the rubbery track.

In spite of only being April, it was a HOT day. We would have roasted had it not been for the sunscreen we sloped on in the morning and the bottles of water we had remembered to bring.

In the summertime, the marble stadium gets incredibly hot. In order to beat the heat try to arrange your visit in the morning or late afternoon.

The only shaded area of the stadium was an access tunnel in the back left corner of the track. The dark tunnel is carved through solid rock and leads visitors to the inside of the mountain. In the ancient days women would perform rituals and celebrations to the Goddess Hera in this tunnel. Flash forward to this day and age, the tunnel now opens up to a beautiful room displaying intricately decorated torches from the various Olympics over the years. It was incredible to appreciate all the unique spots the games have been held over the years.

We finished our visit with a customary podium picture, with the glorious 50,000 seater Panathenaic stadium in the backdrop. We could almost hear the imaginary cheers of our adoring fans. It was an Olympian’s dream! 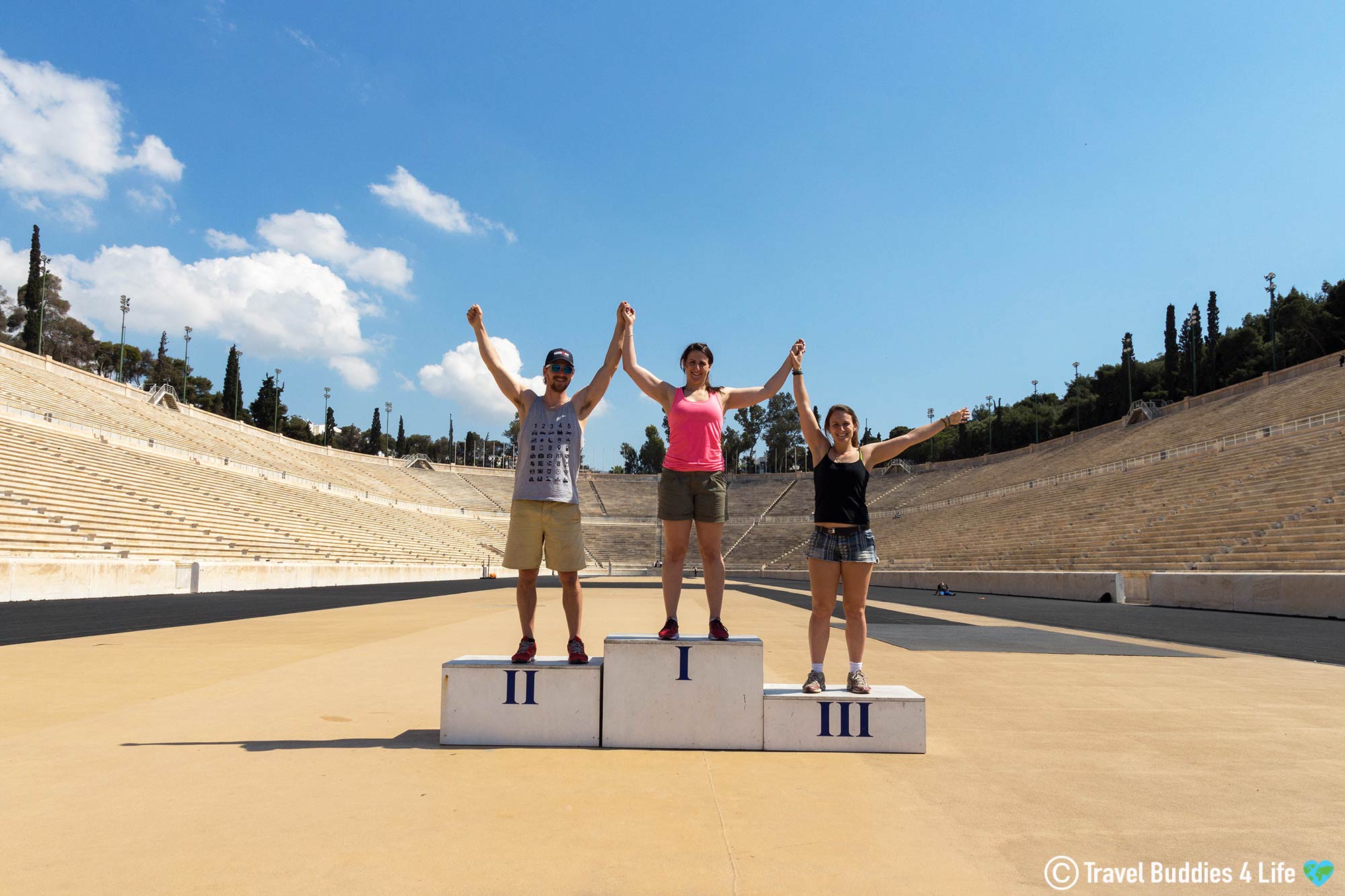 Panathenaic stadium’s days of hosting the Olympic games may have come and gone, but that doesn’t make it any less fabulous to visit. The stadium is an arena unlike any other and standing in this piece of athletic history where the best of the best came to compete was an indescribable feeling.

Make sure to put this place on your Greece tourist list! 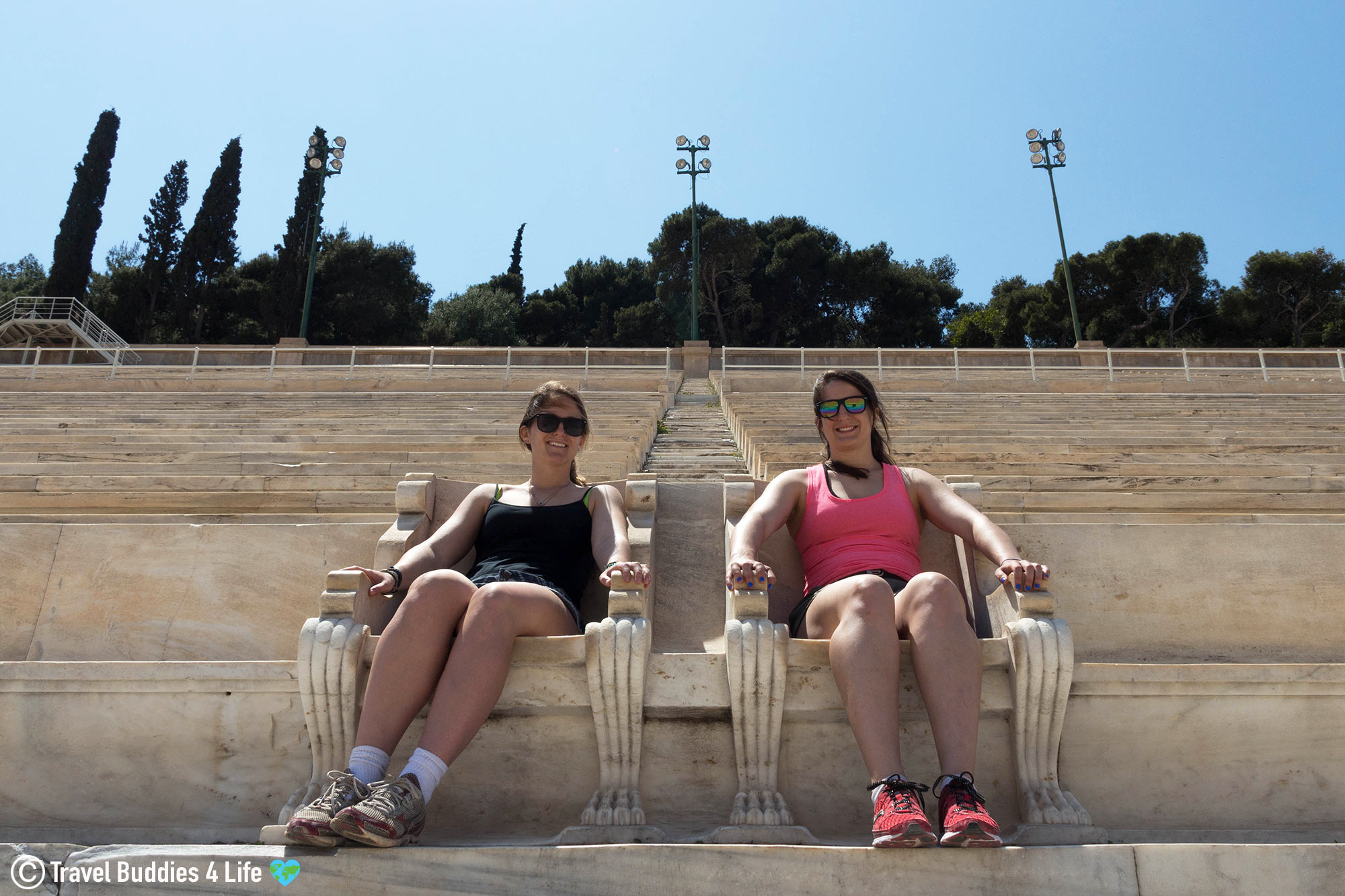 Have you been to the Panathenaic stadium? Did you have fun racing around the track pretending you were an elite Olympic athlete? 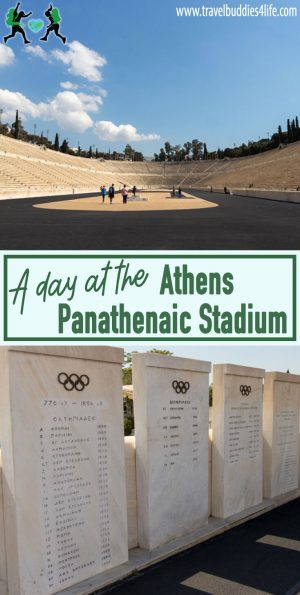