Lucky us; tourist season was just coming to a close. As one of the most iconic landmarks in the world, we had been prepared to battle swarms of people and line up for a few hours to get to the top of the Eiffel Tower. Built in 1889, by senior engineers Maurice Koechlin and Emile Nouguler, the tower is the tallest structure in Paris. It is rumoured that the major inspiration for this structure came from the lattice Observatory built in New York City in 1853. 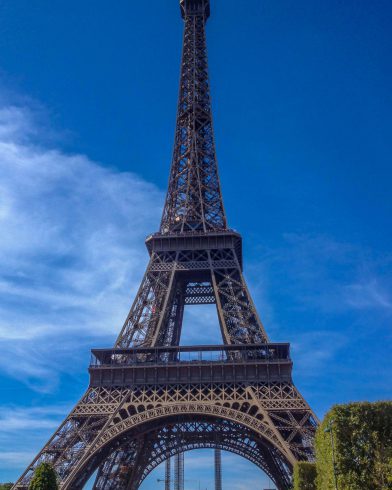 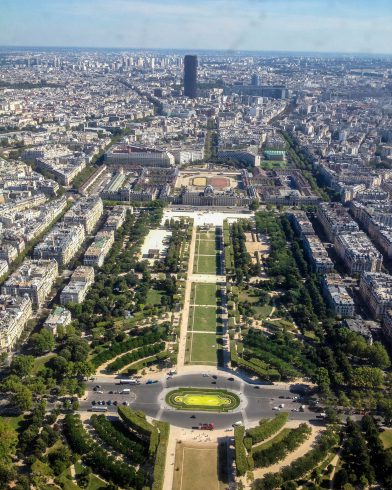 Before my visit to the capital city of France, I had expected to be able to gaze at the tower from anywhere on the streets of Paris. I’m sure I am not the only one with that preconceived notion. Boy was I wrong! It was a shock and a surprised that, in spite of its height, the tower can really only be seen from a few blocks away.

When we arrived at the large expanse of green area running from the Eiffel to the military school called les Champs de Mars. It was early morning and we could hardly believe our good fortune, only a handful of people mingled at the bottom of the lattice like structure. All we had to do was buy our tickets and we could pretty much begin our 324 meter hike to the top. The Eiffel tower has three levels for visitors to explore, with restaurants located on the first two levels and a champagne bar and office (of Gustave the towers creator) at the top. We were really happy that we were both young. The tower had a special rate for tourists aged 12-24 years (okay, so we may have lied a teeny tiny bit about Joey’s age). The tickets to climb to the second floor cost €5.00 each. From the second floor, the only way to get to the top is by taking an elevator. Not being the kind of people that do anything half way, we spent an additional €14.50 to take the lift to the top. 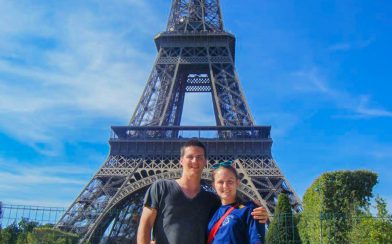 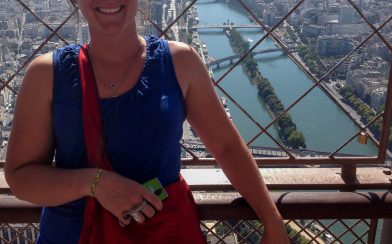 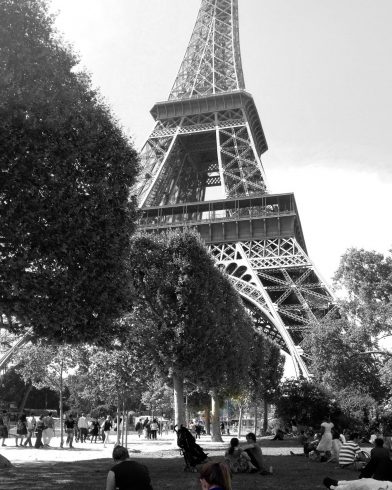 We began our climb, to the first level, through the open lattice structure; the sun beaming down on us. Joey is not a fan of heights and was originally not going to come with me. After a lot of convincing, I talked him into doing it. We had barely made it up forty feet and I could hear the curses flying already. As we climbed past the city buildings of Paris, I could feel the wind picking up. They say that sometimes on really windy days you can even feel the tower swaying ever so slightly. Thanks god, for Joey’s sake, that it was not a windy day. We took one long break on the first floor to check out the miniature toy cars and buildings below through binoculars before finally making it to the second floor! Joey confessed to me later that he was really close to calling it quits at the first level and sending me up on my own. On the second floor the first thing we saw was a pay phone, which we seriously considered giving both our parents a quick call while gazing out onto the incredible Paris skyline. 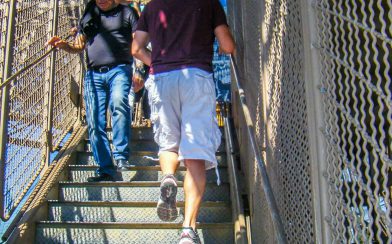 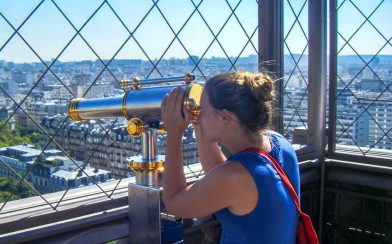 To ease Joey’s tension we stopped at an ice cream parlor before taking the elevators to the top. We shared a bowl of my favourite flavor of ice cream; chocolate (Joey is such a sweetheart). Watching tourists pack into the glass elevators and be lifted towards the peak of the tower did not instill very much confidence in Joey as we waited in the long line. When our turn came, we were stuffed into the glass box like sardines. I got a spot right beside the window giving me a bird’s eye view of Paris and surrounding area. The elevator lurched to life, and gave even me a butterfly in the tummy sensation, as we were pulled higher and higher. It was probably for the best that Joey was stuck inside the sea of people and not able to look down, even I had the slight feeling of vertigo as the buildings and streets shrank in size.

By 10AM we had finally made it to the top. Looking up, as I got off the elevator, all I could see was the towers steel grey lattice separating us from the blue robin’s egg sky. Looking down the Seine River split the busy streets below. Words cannot describe the million dollar smile Joey had on his face when he looked out onto the city from the platform. For someone who is afraid of heights, he had gritted his teeth and made it. After spending about an hour at the top, it was time to head down and get some lunch. As expected, it was a much faster climb down taking us about half the time, and Joey had no problems with the height (he was use to it by now). As we arrived at the bottom the non existent line up from this morning had turned into a swarm of tourists, waiting to make their way up the Eiffel Tower. Looking at each other we smiled thinking the same thing; sometimes it pays to be the early bird. 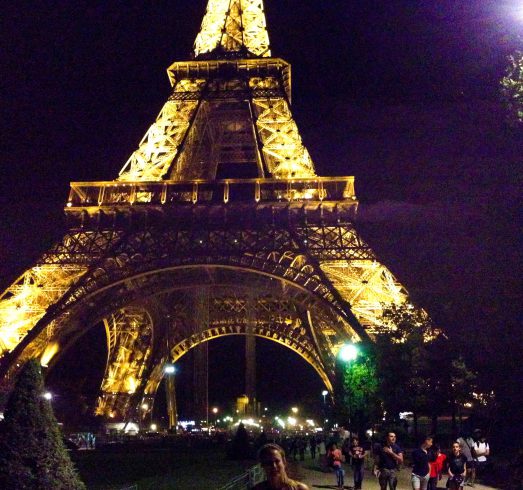 A few days after our climb to the top of the Eiffel Tower, we came back to see the tower at night. Every evening when the sun goes down, the tower puts on a spectacular light show that would make even the most troubled person smile. A blackened Paris, is brought to life by the golden lattice of the Eiffel Tower, reaching far up into the sky. Joey and I brought snacks and sat in les Champs de Mars to have a picnic by the glow of the tower waiting for the hour to strike. For 5 minutes every hour on the hour a light show, consisting of 20, 000 light bulbs, clinging to all four facets of the Eiffel tower, are set off making the tower sparkle and shimmer in a dancing display. We stayed for a few hours marveling at the crowds of people who had gathered to watch the show with snacks just as we had. By midnight it was time to head back to the hostel.

When traveling to Paris, the Eiffel Tower is a must see for any out of country tourist. If you have the opportunity to visit the tower, I would suggest doing so twice: once during the day, climb it and check out the picturesque view, and once at night to feast your eyes on a light show that you will never forget. 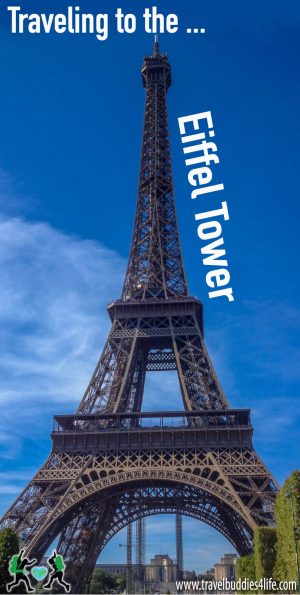 Find out more about exploring the skocjanske james cave…